The Bold and the Beautiful Spoilers: Liam and Hope’s Surprise Wedding – Quinn Returns and Intercedes For Wyatt 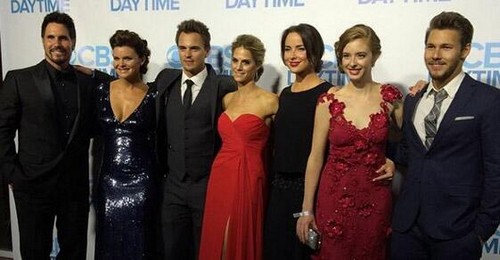 The drama is really heating up on CBS’s soap opera Bold and the Beautiful, and according to spoilers the week of July 28 – August 1 will be full of can’t miss excitement. B&B spoilers tease that after Bill’s confession about his involvement in Ridge’s accident, he pleads with Brooke to still marry him. Unbeknownst to Bill, Deacon Sharpe is moving in on his fiancée, and plants a hot and steamy kiss on Brooke and confesses he still has feelings for her. According to B&B spoilers, Deacon has a proposition for Brooke.

Wyatt called a truce with his brother Liam and said he was done pursuing Hope, however that doesn’t seem to really be the case. Bold and the Beautiful spoilers tease that Wyatt decides to give the Hope For The Future diamond he just inherited to Hope as a gift. Liam protests, and insists it is inappropriate for her to accept the extravagant gift. But, before Hope has a chance to return the diamond, Wyatt hold a press conference and announces that he is giving it to her. Now, Hope has to announce in front of dozens of reporters that she is giving the Hope For The Future Diamond back to Wyatt.

According to Bold and the Beautiful spoilers, Liam feels Hope slipping away from him, so he makes a huge move and surprises Hope with a Paris wedding. He is determined to get Hope down the aisle before he loses her to his half-brother Wyatt again.

Bold and the Beautiful spoilers for week of July 28th also tease that Quinn Fuller returns from her stint at a mental hospital, and announces she is a changed woman. Surely it is only a matter of time before she starts meddling in Wyatt’s love life again. And, there is no way she will sit by while Hope and Liam get married and not do anything to stop the wedding.

What do you think Bold and the Beautiful fans? Has Quinn really turned over a new leaf or is this another one of her schemes? Do you think that Hope is starting to waiver and wishes she chose Wyatt over Liam? Will she make it official and marry Liam or leave him standing at the altar? And what about Hope’s mom Brooke, will she choose Bill or Deacon? Let us know what you think in the comments below and don’t forget to check CDL tomorrow for more Bold and the Beautiful spoilers.