The Bold and the Beautiful Spoilers: Katie and Ridge Prove Bill’s Guilt With Deacon’s Help – He Still Loves Brooke! 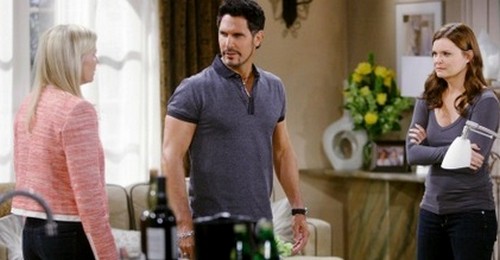 The Bold and the Beautiful spoilers tease some exciting drama for the week of July 21-25. Ridge is determined to prove that Bill Spencer was responsible for the helicopter dumping him in to the Persian Gulf in Abu Dhabi. According to B&B spoilers, Katie will join in on the crusade and use some resources at Spencer Publications to help her fiancé prove that he was wronged.

Bill knows that it is only a matter of time before Ridge and Katie find some solid proof that he orchestrated the attack on Ridge in Abu Dhabi, so during the week of July 21st he will attempt to fast-track his wedding to Brooke. He wants their marriage to be official before Brooke learns the truth and he can no longer get her down the aisle.

Meanwhile, Bold and the Beautiful spoilers tease that Deacon gets involved in Ridge and Katie’s witch hunt, in an attempt to get close to Brooke again. Apparently, he didn’t return just to mend fences with his daughter, it looks like he wants Brooke back too! The last thing Deacon wants is Brooke and Bill to say their “I Do’s,” so it makes total sense that he wants to help prove Bill was responsible for Ridge’s accident in Abu Dhabi.

Despite that fact that Wyatt and Liam hugged it out, and Wyatt gave his word that he would stop pursuing Hope, B&B spoilers tease that he does just that during the week of July 21st. According to the weekly spoilers, Wyatt gives Hope an extravagant gift. Perhaps, the Hope Diamond he just inherited? Looks like the coming romance between Ivy Forrester and Wyatt will need to wait a bit.

So B&B fans, do you think that Katie and Ridge will be able to expose the truth about Bill before Brooke walks down the aisle? How would you feel about Brooke and Deacon hooking up again? And, what are the odds of Brooke forgiving Bill for nearly killing Ridge? Let us know what you think in the comments below and don’t forget to check CDL tomorrow for more Bold and the Beautiful spoilers.

Fans at Soap Opera Spy are not all in favor of a repeat of Wyatt and Hope:

No more Wyatt going after Hope…please. So done with that. They need to get new woman on this show. So sick of Hope & Brooke is so old now, she needs men from Assisted Living. Come on, nothing sexy about Brooke anymore.

I think Brooke will be more prone to pursue Ridge again if it is proven that Bill had a part in dumping Ridge in the Persian Gulf!!….she would no way go after Deacon, even if he is Hope’s papa!! That’s my take on this!! I can see Deacon with maybe Donna!!…..wherever she is…..haven’t seen much of her lately.

Whatever side of the Hope, Wyatt, Liam triangle you are on you can be sure that the slope is steep!