The Bold and the Beautiful Spoilers: Ridge Recalls Accident Details – Do Bill and Brooke Marry Before His Guilt Revealed? 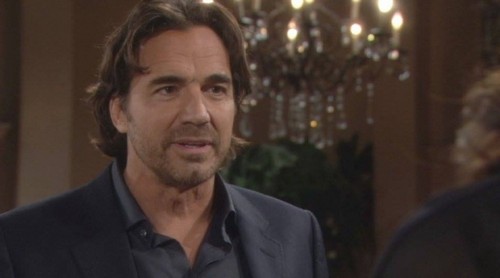 The Bold and the Beautiful fans are well aware that Bill Spencer orchestrated Ridge’s dip in the Persian Gulf while they were in Abu Dhabi. Fortunately for Bill, Ridge returned to the United States with a slight case of amnesia after his fall, and he doesn’t remember the Spencer Publications logo on Justin’s jacket while he was sitting in the pilot’s seat. However, according to Bold and the Beautiful spoilers, all that is about to change as Ridge begins having flashbacks to the day he was dumped out of the helicopter.

According to the July 21st edition of Soaps in Depth, “on Friday July 11th Ridge remembers a critical detail regarding his accident in Abu Dhabi.” So, it looks like paranoid Justin had every reason to be paranoid, and the walls are quickly closing in on him and his boss Bill Spencer. How will Bill explain that it was his own employee flying the helicopter that nearly killed Ridge?

Bold and the Beautiful spoilers revealed during June that some of the cast of B&B headed to Monaco to shoot another wedding. The wedding it set to air sometime in July. Perhaps Ridge remembers Bill is responsible for nearly killing him in Abu Dhabi, so Bill rushes Brooke off to an exotic location to say their “I Do’s” before she finds out what he did and changes her mind. Then again, there is also the chance that Brooke finds out Bill nearly killed Ridge, and it somehow drives Brooke and Ridge back together and they jet off to Monaco and get married, leaving poor Katie behind.

Are you as excited as we are to see the fallout that occurs when it is revealed that Bill is responsible for Ridge’s accident and near death? Do you think Bill will get Brooke to marry him before she finds out the truth? Let us know what you think in the comments below and don’t forget to check CDL tomorrow for more Bold and the Beautiful spoilers.