The Bold and the Beautiful Spoilers: Ridge Rushes to Stop Brooke and Bill’s Wedding in Dubai – Brings Quinn’s Blackmail Pic

BY Amanda Austin on May 28, 2014 | Comments: 14 comments
Related : Soap Opera, Spoiler, Television, The Bold and the Beautiful 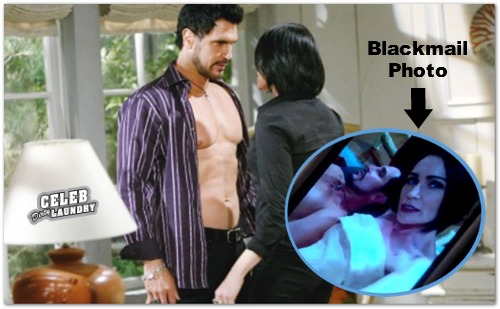 There’s a wedding in the works on CBS’s daytime drama The Bold and the Beautiful, but like any soap opera wedding there are also plans in the works to derail it. Bill and Brooke are planning to tie the knot and say their “I Do’s” in beautiful Dubai. However, their exes Quinn and Ridge are determined to stop the ceremony.

Quinn had a one night stand with Bill Spencer while Brooke and Ridge were standing at the altar. Unbeknownst to Bill they didn’t go through with the wedding, so after drinking his sorrows away he had sex with Quinn. The next day Bill learned that Brooke and Ridge never said their “I Do’s” so he rushed over to her house and began trying to win her over. He never mentioned to Brooke that he had slept with Quinn the night before. Technically he didn’t cheat on Brooke because she was set to wed Ridge, but there is no doubt that if Brooke found out about their night of passion their wedding will come to a halt.

Little does Bill know Quinn snapped a selfie while she was in bed with him, and she has sent it to Ridge. Ridge is currently engaged to Brooke’s sister Katie, but he was enraged when he learned Brooke was preparing to marry Bill in Dubai. Ridge claims he just doesn’t want his son RJ to inherit Bill Spencer as a step-father, but it is becoming pretty clear that Ridge is not over Brooke and although he doesn’t want to be with her, he doesn’t want anyone else to be with her either.

The question on everyone’s mind is how far will Ridge go to stop the wedding? Will he really fly across the world to Dubai to interrupt their “I Do’s,” now that he is armed with a photo of Quinn and Bill in bed together? And, what about Katie? How will she feel about her fiancé abandoning her and flying to Dubai to stop Brooke’s wedding? Unless she is in complete denial, it should be clear to her that her fiancé is obviously not over her sister Brooke.