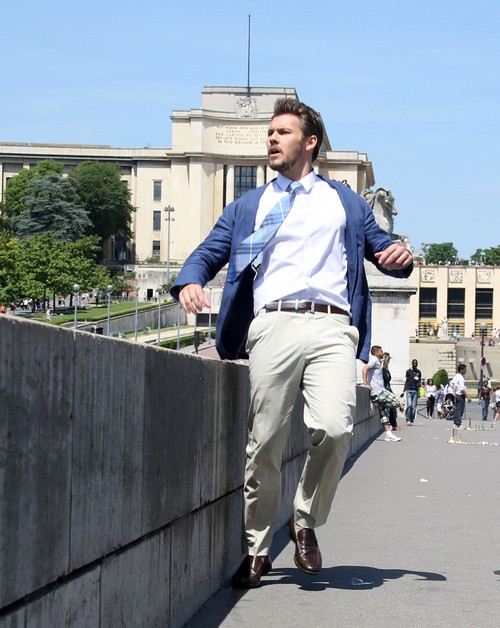 The Bold and the Beautiful spoilers for the week of June 30-July 4 tease a week of can’t miss drama on the CBS soap opera. Quinn Fuller recently proved she will reunite her son Wyatt and Hope by any means necessary, even if it means killing his half-brother Liam. According to B&B spoilers, Quinn will be in hot water once again after Liam is injured at his beach house.

According to B&B spoilers, Ridge and Katie’s relationship is at a stand-still because he is neglecting his fiancée and spending all of his time trying to get his memory back. And, he seems to be succeeding. It is only a matter of time before he recollects his nearly fatal helicopter ride over the Persian Gulf in Abu Dhabi, and realizes Bill’s henchman Justin was the pilot. He may not have to remember though because spoilers tease that Justin begins panicking and unraveling slowly, certain that Ridge is on to him.

After Aly and Oliver’s bizarre Renaissance date, they return to Forrester Creations and Oliver finds himself in a world of trouble. Maya plays her recording for Rick and Caroline, and they begin asking the same question fans have been pondering for week now… is Oliver just using Aly or does he truly care about her? Meanwhile, Rick will have some relationship problems of his own, and begin questioning his feelings for Maya and Caroline.

So Bold and the Beautiful fans, what do you think happened to Liam at the beach house? Did Quinn finally go too far? And, how do you feel about the reemerging love triangle between Caroline, Rick, and Maya? Do you think Rick will wind up going back to Maya, or stay true to Caroline? Let us know what you think in the comment section below, and don’t forget to check CDL daily for all of your Bold and the Beautiful spoilers.

People on Soap Opera Spy are full of feeling on these issues:

Can’t stand Wyatt! I hope Liam gets the help he needs, and him and hope get married.

Please tell me that Liam badly injured isn’t referring to a sprained ankle .

I sure hope that Rick stays faithful to Caroline! Not a Maya fan here.

Kill Liam off or recast. Can’t stand that actor! And he needs to shave anyway. I literally gag every time Hope has to kiss him. Major YUCK!

maya was sort of cray cray when she first got out of prison then in a split second butter would,t melt in her mouth – i knew that facade would not last last…………….lol.

Will we ever see a resolution to the Liam, Hope and Wyatt love triangle – how far will Quinn go to promote Wyatt? We will soon see!

Soap actors film scenes for “The Bold and the Beautiful” on location in Paris, France on June 12, 2014. All of the actors had just attended the Monte-Carlo Television Festival and now were back to work on their trip to Europe!