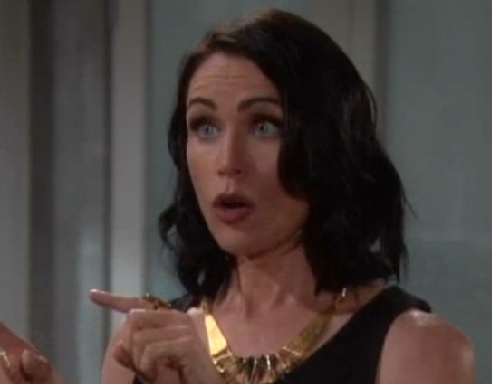 The Bold and the Beautiful spoilers reveal that B&B fans will finally see some more of Thorsten Kaye’s character Ridge Forrester. With all of the love triangles that Hope and her mom Brooke seem to find themselves in, it feels like forever since Ridge and his fiancée Katie appeared on the CBS soap opera. In a conversation between Katie and Ridge it was recently revealed that Ridge still hasn’t drawn any designs from Forrester Creations since his accident. Katie vowed to help him keep his bizarre artistic injury a secret, but Bold and the Beautiful spoilers tease that his secret has just fallen in to dangerous hands.

During the August 19th episode of Bold and the Beautiful, Quinn paid Ridge a visit at his office and tried to convince him to interfere in Brooke and Bill’s relationship. Before Quinn left, she stole a bunch of crumpled up pieces of paper from Ridge’s garbage can. Back at her lair, Quinn and Deacon put two and two together while examining Ridge’s trash and realized that Ridge got designer’s block after Bill Spencer had him dumped in to the ocean in Abu Dhabi.

Ridge obviously wanted to keep his injury a secret, especially from the employees at Forrester Creations, but now that Quinn knows what is going on it is only a matter of time before she tells Brooke what happened. Quinn and Deacon are on a mission to shut down Bill Spencer’s attempts at reconciling and marrying Brooke. Bold and the Beautiful spoilers tease that Quinn and Deacon don’t waste any time letting Brooke know that Bill’s stunt in Abu Dhabi seriously injured Ridge.

The fact that Ridge wasn’t seriously injured when Bill had Justin dump him from the helicopter was Bill’s saving grace, and the only reason Brooke has been giving him the time of day. Once Brooke learns that Ridge is suffering from what Bill did, it will most likely ruin any tiny chances that Bill had of winning Brooke back.