The Bold and the Beautiful Spoilers: Deacon and Quinn Team Up and Get Hot – Rick Shuts Maya Down and Chooses Caroline 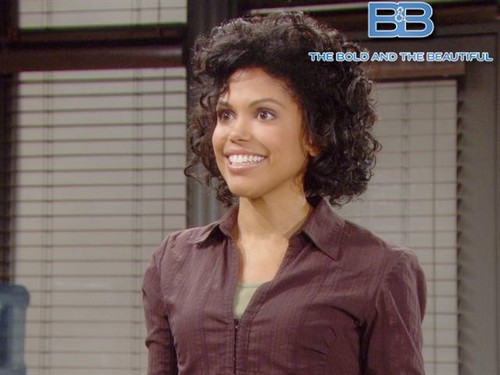 The Bold and the Beautiful spoilers for the week of August 18-22 tease more love triangle madness for the CBS soap opera. Before half of the B&B characters jetted off to Paris for a whirlwind wedding, Maya was stirring up drama at Forrester Creations. She decided that, despite the fact that she was engaged to Carter, she still had feelings for Rick Forester, and she cornered him in the steam room and let him know it. Naturally, Rick’s wife Caroline was not impressed with Maya’s sudden desire to express her feelings for her husband. According to Bold and the Beautiful spoilers, Rick makes a decision and chooses his wife, Caroline, over Maya and tells Maya to stop pursuing him.

It recently became clear that Deacon Sharpe still had feelings for his baby-mama, Brooke Logan, when he planted an unexpected kiss on her. Bold and the Beautiful spoilers tease that Bill isn’t ready to give up on his relationship with Brooke and, during the week of August 18th, he surprises her with another proposal. Meanwhile, Deacon makes a shocking move after discovering that Quinn is a suspect in the Montemayor murder case and actually joins forces with her. Rumor has it that Quinn decides to sink her claws into Deacon and attempts to seduce him while they are working together.

Bold and the Beautiful spoilers for August 18th-22nd reveal that Ivy is guilt-ridden over the fact that if Liam hadn’t stopped to help her out of the river, he would be the one married to Hope right now and not Wyatt. She convinces Liam to talk to Hope and explain why he was late for their rendezvous at the Eiffel Tower. According to B&B spoilers, by the end of the week Bill Spencer has to play referee between his two sons Wyatt and Liam.

So, B&B fans, do you think Hope will reconsider her marriage with Wyatt once she learns why Liam was late? And what could Quinn and Deacon possibly be joining forces to do? Would you rather see Deacon in a relationship with Brooke or Quinn? Let us know what you think in the comments below and don’t forget to check CDL tomorrow for more BB spoilers.