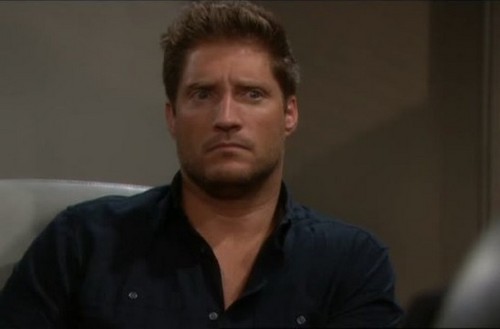 The Bold and the Beautiful spoilers teased Quinn Fuller’s return for weeks. When she returned Quinn insisted that she was done wreaking havoc in her son Wyatt’s life, but it looks like she had a few more tricks up her sleeve. Quinn may have everyone fooled, but it takes a con to know a con, and Deacon Sharpe is on to her. While Quinn was away “seeking treatment” for her obvious mental issues, Wyatt received shocking news that Ricardo Montemayor had passed away and shockingly left the Hope Diamond to Wyatt in his will.

When Quinn returned, Wyatt received news that authorities thought that Montemayor’s death was suspicious and he may have been forced to leave the diamond to Wyatt in his will. Wyatt confronted Quinn and she denied her involvement, Bold and the Beautiful fans doubt Quinn’s innocence though. And, apparently so does Deacon Sharpe.

Bold and the Beautiful spoilers tease that after Quinn meddles with Hope and ruins Liam’s trip to Paris, and almost drowns Ivy, Deacon sets out to prove she is guilty. After some major sleuthing in to Ricardo Montemayor’s death, Deacon uncovers some shocking details, and flat out accuses Quinn of murder. Sick of all of her scheming and meddling in to Hope’s life, Deacon may finally be the one to bring down crazy Quinn for once and for all.

What do you think Bold and the Beautiful fans? Did Quinn force Montemayor to will the Hope Diamond to Wyatt, and then kill him so Wyatt could have his inheritance? If Deacon uncovers some evidence, do you think Quinn’s reign of terror will finally come to an end, and she will be carted off to jail? Let us know what you think in the comments below and don’t forget to check CDL tomorrow for more Bold and the Beautiful spoilers.