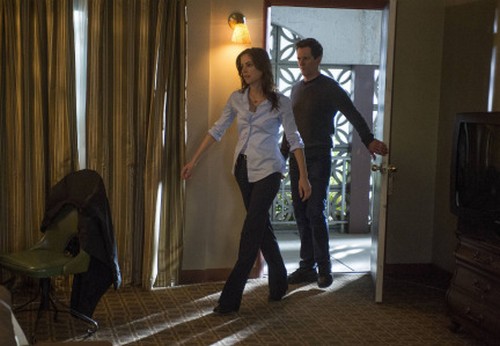 Tonight on FOX their hit psychological thriller THE FOLLOWING airs with a new episode called, “Reflection.”  On tonight’s episode Emma realizes she is in dangerous company.  Did you watch last week’s episode?  We did and we recapped it right here for you.

On last week’s episode after the latest shocking revelation in the case, Ryan and Max attempted to put the pieces together and stay two-steps ahead of the FBI, despite Weston’s constant warnings to stay out of the way. Meanwhile, Emma became even closer to Mark and Luke, while Joe and Mandy met up with a follower in search of assistance.

On tonight’s episode In an attempt to learn new information, Ryan and Max capture a suspect. But complications lead to a game of dangerous cat and mouse. Also, Joe grows accustomed to his surroundings and establishes a plan of his own, while Emma realizes she is in dangerous company.

We will be live blogging The Following Episode 5 with all the up-to-the-minute details at 9PM EST so make sure to come back to this spot and watch the show with us.   Make sure to refresh often so you get the most current info!  While you wait for the episode you can catch a sneak peek of tonight’s episode BELOW!

Joe is back on the form but the mystery remains. Just who is Lily Gray? She managed to grab Joe’s interest with a few flashy murders and now she’s appearing to be the perfect hostess. Now if only Luke and Emma learned to appreciate her efforts. But it seems neither of them like being supplanted. They saw the way Joe and Lily looked at each other and they don’t like it. Luke figured his mother is replacing him with a new and shiny toy. While Emma can’t let go how Joe could so easily abandon her.

She didn’t know about his plan B and was both hurt and relieved to find him alive. And yet he shouldn’t have left her like that. She was one of his earliest and most loyal followers. She would have happily died for him and to find that it only worked one way came as a shock to her. Joe knows he has to make it up to her but how is he going to find the time with Lily around.

Lily doesn’t like sharing and having Emma lurking in the background every time she goes near Joe just isn’t working for her. She was considering killing Emma when Mark helped her come up with a new idea. He likes Emma and has made no secret about it. So what harm can there be getting Mark to keep Emma occupied?

Mark gets Emma. Sure, he read all he could about her but he does have crush on her as well. That’s why he’s the perfect distraction. He can see how sad she is and chose to use art to make her feel better. Emma was an artist long before she met Joe. Mark figured why not let her paint like she used to. It will help unwind her.

Meanwhile, his twin brother was sent out on his errand. Luke was supposed to have intercepted Giselle. It was a part of their back up seeing as she got made by Ryan back in the city. Giselle nearly missed the meeting time though. Max and Ryan caught her and dragged her to a motel room. They wanted to get as much information out of her as possible when she gave up the meeting place. She knew that Luke and whoever he would bring would be able to handle Ryan. All she had to do was wait for the right time to overpower Max.

Which was the first thing she did after Ryan left. She brought down max and arrived at the agreed to Warehouse only to find one of their “brothers” has been killed. Ryan was able to take him down but not Luke. Ryan was shot during the process and made sure to quickly flee the scene. However he’s bleeding a lot and Luke knows he and Giselle together can trace Ryan from it.

Luke isn’t a fan of Joe. Not like everyone else is. He wants to kill Ryan and he doesn’t even care how Joe is going to feel about it.

Luke and Giselle pursued Ryan to farmhouse. Luckily, Ryan had taken the added precaution of locking up one of the homeowners to keep her safe otherwise the serial killers could have used as leverage. Like they did before. But they had gotten cocky. Instead of getting him together, Giselle thought she could handle on her own. She couldn’t. Ryan managed to kill her with her own knife and by time Luke on the scene he had fled.

Luke was much too caught up in his grief to keep going after Ryan. And Ryan had to rush back to the motel room to see what happened to his niece. Giselle had told him during their struggle that she killed Max but that proved to be a lie. Max was perfectly fine when Ryan returned. The only thing wrong with her was that she was upset that her uncle was ignoring her calls.

Luke now has to return home with two dead bodies and he’s probably going to blame Joe for bringing Ryan into their lives.

Lily on the other hand likes Joe just the way he is. She even wants to foster his talent because that what she normally would have done with groundbreaking artists. That’s why she hand delivered a young college student that was just his type. She told him that he should get back to work but Joe didn’t appreciate being treated like a trained monkey. As that goes for Emma too. She had gotten close to Mark. Perhaps too close for comfort. She tried to touch him and he reacted badly. He told her that he has to be the one to initiate contact. That could explain why he likes corpses so much.

Emma didn’t like that and tried to leave him by himself in the art studio. Unfortunately she learned by trying to flee that’s he was locked in. She and Joe are as much prisoners there as they would have been on the run. Eventually they were just going to have to accept the new status quo. And soon they did!

Emma kept drawing and Joe killed. At least they got stuck with something they were good at. Although Joe’s secret could very soon get exposed. The feds are looking into Mandy’s disappearance. Her mother and pastor died suspiciously and she had only recently come across their desk when they found a photo of the missing teen driving with an unknown man.