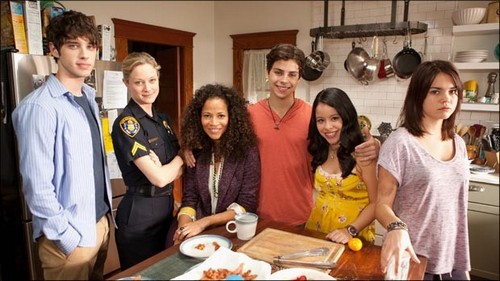 Tonight on the ABC Families their new drama, THE FOSTERS returns tonight with its winter premiere called, “Family Day.” On tonight’s show as per the Freeform synopsis, “Callie visits the family and things get awkward between her and Brandon. Meanwhile, Rita informs Stef and Lena of Callie’s plans; Jude has to decide if he wants to proceed with the adoption and Lena wants Stef to make amends with Frank.”

Tonight’s season 1 episode 14 is going to be an exciting one that you won’t want to miss, so be sure to tune in for our live coverage of ABC Family’s The Fosters tonight at 9 PM EST! While you wait for our recap hit the comments and let us know what you think of The Fosters season 1 this year. Check out the sneak peek video of tonight’s show below, while you wait for the recap!

Brandon was completely blindsided by Callie text. He was still trying to reach her the next day just to get an explanation. He needs to know if he did something that made her mad enough to break up to break up with her. He has no idea that Callie lost her phone and won’t be able to reach him. Callie does try to get in touch. She was close to using a phone at one point but was caught by her Den mother, Rita.

Back at the house, Lena and Stef sat Jude down. They needed to speak to him about his options. They still want to adopt both him and Callie. The only problem standing in the way is Callie. They’ve chosen her but she has yet to choose them back. That’s why it’s important to hear what Jude has to say. Lena and Stef want to adopt no matter what choice Callie makes.

He agreed to think it over. He’s never been separated from Callie and he has to think about what will be best for him. The only thing he does know is that he should really be careful before entering the room he shares with Jesus. He walked on Jesus taking half naked pictures of himself. Jesus wasn’t doing anything weird though. He merely wanted to send some photos to his girlfriend overseas. However Jude catching him made his fingers slipped. Jesus accidentally sent his photo to Emma.

They’ve gotten close over their shared interest in wrestling but not that close. She recently started to forgive him over the whole Lena thing when she saw how dedicated he was to getting off the bench. Jesus is starving himself trying to lose weight. He knows if he loses enough that the coach will have an available spot in that weight division.

Jesus was still going hungry even after the whole family arrived for Family Day. Callie and her housemates have been taking various cooking classes. So there was an arrangement of Asian cuisine and soul food waiting for the families.

Brandon was allowed to come along on the trip. He promised his moms he wouldn’t try anything. He just wanted to see her. So they agreed. They knew what risks they were taking and did it anyway. Brandon had found a moment alone to talk to Callie. He was bound to do it. Brandon wanted to know why they broke and she explained everything. How she didn’t have her phone so couldn’t have sent the message. They were interrupted before they could properly make up. Stef and Lena wanted to ask about Callie’s independent living plans seeing as they hear she applied to get her own place.

They weren’t thrilled about the idea. Once they got back home, they were scared the system would even allow that. How is a sixteen year old living alone a good idea? That is if she’ll be living alone. Jude has adapted to living with the Fosters. He calls his room my room and has already gotten into a big brotherly fight with Jesus over “Jesus time”.

It’s actually Brandon they should be worried about. When he heard about her living alone, they created an illusion of where they’d put their stuff. It was a good dream and it did make Callie’s day. That was until she return to the home. Cole had overdosed on his hormones injections. After apologizing for the text to Brandon, Callie allowed him to continue to use her phone. Cole explained that she needed those injections because she couldn’t live with her body slowing turning back into a girl. Then this happened.

As Cole’s roommate, she had a responsibility towards him. The rest of the group doesn’t want her halfhearted apology. They’re at the house because it was the last place for them but no one has sympathy for Callie. They saw her family. Everyone knows she has a place to go to while the rest of them have to fend for themselves.

Rita catches Callie alone. She tried to get through to her that she couldn’t keep evading everything and everyone. Eventually Callie had to stop running from her problems. Rita didn’t think her advice sunk in but it must have. When Cole returned, Callie finally figured out she should try listening for once instead of thinking she could solve all of her own problems. She gave Rita her cell phone. The first step into making a second chance was to admit what she was doing was wrong.

Lena is thinking about having a baby. She always wanted to get pregnant and then she met Stef. Stef had a son and the two went on to adopt Mariana and Jesus. But the pregnancy idea keeps swimming around her head.

Lena checked with a doctor to see if it was a possibility and she was told her vital looked good. These things though can change. Particularly when you take in her age. Lena wanted to discuss it with Stef and there was never really a good time. They were worried about Callie and Jude. The Stef’s father came back into the picture. He missed their wedding and though he could make up for it by giving them a new car. Stef rejected it. She didn’t like how he thought he could buy forgiveness.

Lena did get around to convincing Stef to try with her dad but they didn’t know it was too late. Stef arrived at house after he passed away in his sleep. She never got the chance to tell him she forgave him and Lena won’t want to bring up having a baby during such hard time for Stef. She’s going to want to be supportive.