BY Kristine Francis on May 4, 2014 | Comments: 3 comments
Related : Recap, Television, The Good Wife 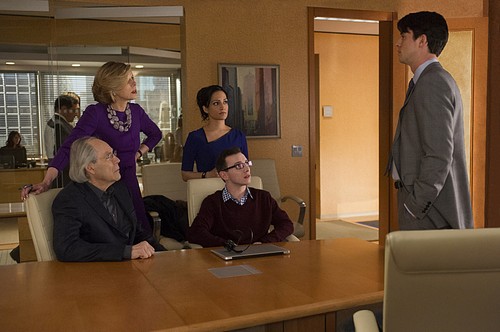 Tonight on CBS The Good Wife returns with another dramatic episode. In “The Deep Web” Alicia considers options outside of her marriage when she meets a handsome entrepreneur, while serving on jury duty. To help think through the situation, she consults her mother. Meanwhile, Diane helps some friends when their son is accused of selling drugs on the Internet.

On last week’s episode when Alicia payed a visit to long-time client Colin Sweeney, she found herself in the unwanted role of witness when a body was discovered in his home. Meanwhile, Eli stepped in when an unfortunate picture of Zach threatened to become a public relations nightmare for Peter. Josh Charles returned as episodic director. Dylan Baker returned as Colin Sweeney and Laura Benanti guest starred as his fiancée, Renata Ellard.  Did you watch last week’s episode?  If you missed it we have a full and detailed recap, right here for you.

On tonight’s episode when Alicia has a chance encounter with a charming entrepreneur during jury duty; she begins to consider options outside her marriage and seeks the advice of her mother. Meanwhile, Diane’s friends come to her for legal advice when their son is accused of selling drugs on the Internet.

Season 5 episode 20 looks great and we’ll be updating it live for you beginning 9PM EST. While you’re waiting for the drama to unfold hit up the comments and let us know what you think of the season so far!

Alicia might have met “someone”. She was pulled in on jury duty when she ran into Daniel. And though it’s been a while since Alicia has taken an interest in anything besides work (post-Will), she appears to be interested in Daniel.

As for her work, Alicia’s maneuver last week saved Finn Polmar’s job, but it then put him at the mercy of Eli Gold. Eli wants to make sure that Finn wins. It would look bad if the governor’s endorsement got him nowhere so Eli is pulling on all the strings in order to get Finn elected. However Finn is pre-occupied with his new case.

He has to go after a young teenager with cerebral palsy and because that won’t play off well – he tried to make a deal with the drug dealer and his lawyer, Diane. Diane is a friend of her newest client’s grandfather. He’s also one of her wealthiest clients so she can’t let Robbie go down for this. It might convince his grandfather to withdraw from the law firm.

So Diane is going to play hard ball. She brought in Louis to help sway Finn into letting Robbie off. It would look bad if Finn took down a disabled a kid represented by his disabled lawyer.

But Finn has a witness. Diane’s client swears he didn’t sell drugs over the internet though what he did do was write up fake reviews. Yet when Kalinda went to go check out the witness she found a young woman who also believes that Robbie was the creator of the drug trafficking website. The witness never mentioned the last part to the ASA because she was scared of retaliation.

While Robbie says he only told her that to impress her. Though if the young woman ever admitted his falsehood in front of jury then it would end badly for him. So Diane and Kalinda are going to try to get him a deal by finding the real culprit behind “Silk Road”.

Alicia wasn’t appointed for jury duty because of who she was – a lawyer married to the governor – so she had to say goodbye to Daniel. And after that she couldn’t even lose herself in her work. Cary thought she needed a break and demanded she take the day off.

How sweet and truly naive of him. Alicia lives for work and her children. With her kids still in school then Alicia was stuck at home dying of boredom. She was so bored in fact that she found herself agreeing to a lunch with her mother!

Alicia’s relationship with her mom is complicated and yet when she needed her – Veronica was able to offer some form of comfort. That was right before she ditched Alicia for her latest boyfriend.

Alicia didn’t know what to do with herself after that and so she went looking for a missing wallet. If it really is missing? She thought she had left it behind at the courtroom, but couldn’t find it there. On the other hand what she did find was Daniel.

Even knowing who she is or better yet who she’s married to – he still asked her out to lunch. And once at lunch, he continued to flirt with her till she invented an excuse to leave. So he then invited her to dinner, but he kindly left the door open to what that might mean.

Either Alicia takes him up on that offer or she ignores it. The important part is that she needs to figure out if she’s emotionally ready to move on from both Will and Peter.

Meanwhile Finn and Diane’s case took an unexpected turn. The “witness” said she was never involved with other people on the Silk Road. Though her personal drug insignia was found at the scene of the alleged drug dealer’s apartment. The owner was dead by time Finn and the police arrived so it looks like Robbie was lying or at most covering his tracks on whose really behind the drug ring. And that’s why Kalinda tried to shift blame on the witness. She saw the insignia and thought it would most likely the witness was lying about everything.

The witness blames Robbie and Robbie (under the advisement of his people) is blaming the witness. Also, in the middle of this turmoil, Diane has to fight for her position as acting partner because Louis and David are secretly working behind her back to maneuver her out. So she was trying to do her best with the case she had when Kalinda delivered a death blow. It seems their client is a notorious drug kingpin and Diane could never willingly defend someone guilty.

Diane lost a large account because of her morals and then to top it off Kalinda confirmed that Louis is trying to screw her, but he wasn’t lying when he said he was dying. Louis used his illness to excuse his weird behavior (i.e. backdoor meetings with David) and it turns out that he now is just a bastard.

Finn knew something was up when Diane dropped out of the case and so he called Alicia for a character assessment. And she told him that Diane would never risk perjury for anyone. Now Finn knows he has the right guy (unlike the last time) and it will be coup to take down Robbie.

Earlier, Finn did a TV interview that Eli had arranged for him and he was good. So taking down a drug ring is only going to make him look even more like a hero to potential voters.

And then there’s Alicia. She did end up going to the bar to meet Daniel. But changed her mind at the last minute. If her own mother couldn’t help clear her situation up then who can? Because Alicia feels like she has to remain faithful to someone – she just doesn’t know to who!