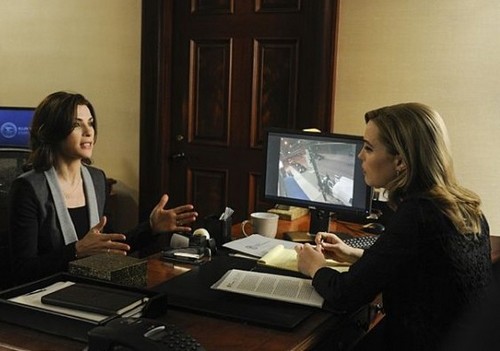 The Good Wife returned tonight to CBS after its mid-season winter hiatus and it was another great episode with one of the best drama’s on television today.  I cannot wait till next week’s episode, we have a sneak peek video and some insight for you below on what is going on next week below.

On tonight’s show Alicia represented a band suing a TV show for copyright infringement, but the simple case became psychological warfare when Will joined the opposing council and used his knowledge of Alicia’s strengths and weaknesses against her. Also, Eli hired Kalinda in an attempt to get ahead of a potential scandal..  If you missed the episode we have a full and detailed recap, right here for you.

Spoiler alert: If you’re one of those people who doesn’t like spoilers, stop reading now! We have some juicy spoilers for you about the season 3 episode 12 of CBS’s “We,the Juries.”

CBS’s Official Synopsis: “Alicia (Julianna Margulies) and Will (Josh Charles) will each represent one-half of a couple accused of smuggling drugs, but the courtroom is going to become mired in confusion and legal technicalities when they insist on separate juries for each client.”   On next week’s show we will music from Bruce Springsteen’s new album.

The Good Wife Season 5, Episode 12 “We,the Juries” airs on CBS on January 12th, 2013. Check out the preview video from episode 12 below and let us know in the comments below what you think!