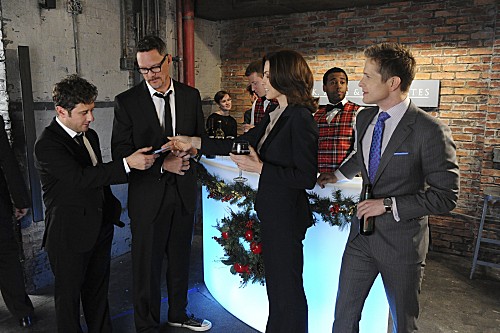 Tonight on CBS THE GOOD WIFE returns after a five-week winter break with a new episode called, “Goliath and David.” On tonight’s show Will uses his knowledge of Alicia’s weakness to get under her skin in court.  Did you watch the last episode before the winter hiatus?  If you want to get caught up before tonight’s show, there is a full and detailed recap for your enjoyment here!

On tonight’s show Alicia represents a band suing a TV show for copyright infringement, but the simple case becomes psychological warfare when Will joins the opposing council and uses his knowledge of Alicia’s strengths and weaknesses against her. Also, Eli hires Kalinda in an attempt to get ahead of a potential scandal.

Tonight’s The Good Wife season 5 episode 11 is going to be exciting, and you won’t want to miss. So be sure to tune in for our live coverage of The Good Wife — tonight at 9PM EST! While you wait for our recap, hit the comments and let us know how excited you are about the new season of The Good Wife.  Check out a sneak peek of tonight’s episode below!

Tonight’s episode of The Good Wife picks up exactly where we left off during the midseason finale. Marilyn has just announced that she will be naming her son Peter. Eli takes Marilyn aside and asks her why she is naming her baby after the Governor, Marilyn insists that she is naming her baby after its father, but it is a different man named Peter. She can’t tell Eli about her son’s father because he is a “private person.”

Alicia’s party seems to be going over smoothly, until she tries to pay the band, but they want legal advice instead. They covered a rapper named Rebel King’s song, and a TV show called “Drama Camp” stole their cover. The TV show is making a ton of money off form their song and has been #1 on I-Tunes for the last 8 weeks.

While Alicia and her partners are enjoying their party, Will and Diane are at Lockhart & Gardner arguing about opening a new office in Los Angeles. Diane puts the new office to a vote, and the idea is shot down.

Mr. Preston arrives at L&G looking for Alicia, because she is suing him for copy-right infringements (for the Rebel King cover song). Will tells Preston that Alicia has moved to a different firm, but he offers to represent him in court so that he can go head-to-head with Alicia again.

Mr. Preston pays Alicia a visit at her office, and she is shocked to see Will come along with them. Will and Preston are counter-suing Alicia and her client, Rebel King also sold them the derivative right to his song.

Back at the office Will confides in Damien and warns him that Diane is following him and researching his past.

Alicia, Will, and their clients head to court to determine who owns the cover to Rebel King’s cover song. Will is obviously taking this case personally, and won’t stop objecting to Alicia’s testimony. Alicia is thrown off by his objections, and it is clear in her questioning. Alicia is upset because she confided in Will that during her first case the opposing team threw her off by objecting over and over. Will is playing dirty, so Alicia decides to do the same. During recess she heads home and changes her outfit. She purposefully wears the same outfit she wore the first night her and Will had sex. It works. Will bombs during his testimony. After court he asks Alicia why she changed and she says she “decided to wear what she wore the first night he banged her.” Will is shocked, and Alicia prances off.

Kalinda follows Marilyn to her ultrasound and makes conversation with her in the waiting-room. Marilyn reveals that it will be difficult for her to keep her baby-daddy out of her son’s life, because she has to see him every day.

Back in court, it’s not looking great for Alicia’s client. He used to work in a studio with the same artist that stole his song. The judge dismisses Alicia’s case, because regardless of who’s idea the song was, her client did not own the derivative rights when they recorded Rebel King’s song.

Kalinda is sleeping with the enemy, literally. She is still seeing the female cop that Damien paid to follow her.

Alicia, Cary, and their client head back to Alicia’s office to regroup. Alicia refuses to lose to Will. Cary has a break-through, he realizes that Roby’s cover of Rebel’s song was satire. They head back to court and the judge is convinced, he tells Cary and Alicia to come back with proof that the song was satire and he will rule in their favor.

Kalinda is still trying to find Marilyn’s baby-daddy. She finds another man named Peter that she was with at her high-school reunion around the time she was impregnated. Peter tells Kalinda that the night of their reunion Marilyn rushed off to meet with her boss Peter, and they never had sex.

Back in court Alicia and Will both bring in their own musicologists to determine whether or not Roby’s cover of Rebel King’s song was satire. Will brings in Rebel King and puts him on the stand, and Rebel reveals that his song is a satire. Therefore Roby’s song couldn’t have been satire.

Kalinda pays Eli a visit and brings him bad news. She believes that the governor Peter is indeed the father of Marilyn’s baby, but it’s more complicated. Someone else knows and has proof. The surveillance tape from the hotel that Peter and Marilyn stayed together in was stolen. Eli questions Marilyn about the pregnancy, and she refuses to admit who the father of her baby is, she kicks him out of her office.

Diane tries to make amends with Will, she thinks that his plans to open another office are all about Alicia. Will reminds Diane that she walked away from him, and it is his turn to lead the partnership. Diane reluctantly agrees with him, and agrees to vote his way.

Eli receives a mysterious phone call from a reporter, giving him a heads up that she has a video that will be released tomorrow.

Alicia’s team has a break-through. Behind the music on Drama Camp’s song they hear bowling balls crashing. Roby recorded his song in a bowling alley. Preston literally stole his exact song, down to the background noise. Will and his client have no choice but to render defeat to Alicia and her team.

Eli pays the reporter at the Tribune a visit. She shows him the surveillance tape she received. It has nothing to do with Marilyn, it is a tape of men dressed in black loading boxes of papers into a van, and came with a note stating “here’s proof our Governor Peter stole the election.” Eli heads back to the office, speechless. Marilyn is there waiting for him with her baby-daddy, a sixty year old man she had a one night stand with. Governor Peter may not have gotten Marilyn pregnant, but he has done something much worse, rigged an election.