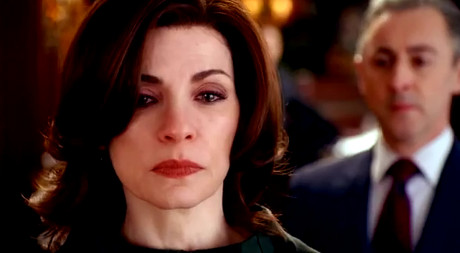 Did you watch The Good Wife last night? We did! If you missed the episode, click here for our full recap. If you were lucky enough to be present for this episode, then you know something MAJOR happened. Heavy spoilage regarding that “super major thing” occurs in the following paragraphs, so if you weren’t on top of your TV game last night, then you might want to shut your eyes and look away from the screen ASAP. Spoilers for The Good Wife season 5 episode 16 “The Last Call” weren’t released before last night’s show as usual, so as to protect the major event that still has some fans of the show reeling with anger.

On last night’s episode, a major character died. The name of that character? Will Gardner. The following episodes will, of course, be dealing with the aftermath of his death. On next week’s episode . . . “Alicia and Cary are in NY for a conference where Alicia is the keynote speaker. Florrick Iagos is vying for a client in NY against Lockhart Gardner. Alicia has some critical flashbacks about Will while preparing her speech. Will is pressured and then setup to get him to testify in the Ballot box case.”

Regarding last night’s death, showrunners released the following letter, which is quite heartfelt, well-worded, and might help to deaden the sting left behind by Will’s untimely death: “We, like you, mourn the loss of Will Gardner. And while Will is gone, our beloved Josh Charles is very much alive and remains an integral part of our family. ‘The Good Wife,’ at its heart, is the ‘Education of Alicia Florrick.’ To us, there always was a tragedy at the center of Will and Alicia’s relationship: the tragedy of bad timing And when faced with the gut punch of Josh’s decision, made over a year ago, to move on to other creative endeavors, we had a major choice to make.”

They continue, “Finally, we chose the tragic route for Will’s send-off for personal reasons. We’ve all experienced the sudden death of a loved one in our lives. It’s terrifying how a perfectly normal and sunny day can suddenly explode with tragedy. Television, in our opinion, doesn’t deal with this enough: the irredeemability of death. Your last time with the loved one will always remain your last time. ‘The Good Wife’ is a show about human behavior and emotion, and death, as sad and unfair as it can be, is a part of the human experience that we want to share.”

Check out the preview clip for next week’s episode and let us know what you think about this tragic event!