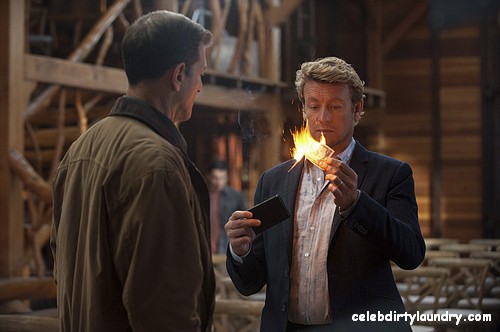 THE MENTALIST returned tonight with another new episode and on it Jane and the FBI took up the cause of a death row inmate.  If you cannot wait till next week’s episode, good news, we have a sneak peek video and some insight for you below on what is going on next week’s episode 18,

On tonight’s episode a death-row inmate needed Jane’s help to prove he was not guilty, and time was of the essence because the prisoner was scheduled to be executed in two days.  More happened!  Did you watch tonight’s show?  We did and we recapped it right here for you.

Spoiler alert: If you’re one of those people who doesn’t like spoilers, stop reading now! We have some juicy spoilers for you about the season 6episode 18 of CBS’s “The Mentalist.”

CBS Official Synopsis: “When a woman is found murdered near a remote men’s social club, Jane must find a way to insinuate himself into the insular group to find the killer.”

On next week’s episode Jane rubs elbows with the rich and powerful when a killer hides at an elite Men’s-Only club.  The episode was written by Jeffrey Hatcher and directed by Eric Laneuville.

The Mentalist Season 6, Episode 18 “Forest Green” airs on CBS on April 20th, 2014. Check out the preview videos from episode 16 below and let us know in the comments below what you think.