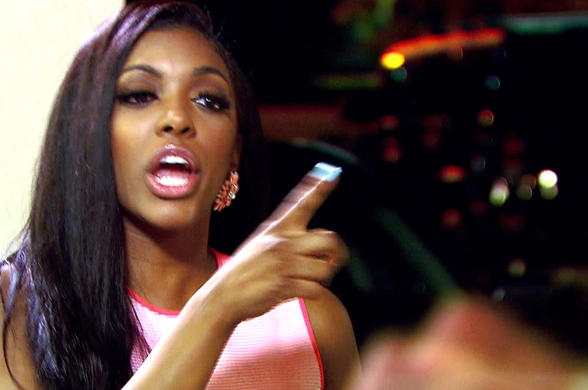 Tonight on Bravo, The Real Housewives of Atlanta continues with an all new Sunday December 28, season 7 episode 8 called “Tea with a Side of Squashed Beef,” and we have your weekly recap below. On tonight’s episode, Kandi Burruss can’t seem to keep the peace with her family, causing Todd to suggest an alternate solution. Phaedra Parks looks ahead toward life as a single parent, while Claudia Jordan’s mom and grandma touch down in Atlanta to have some fun on the town.

On the last episode, back in Atlanta after a trip down the memory runway, Cynthia dove right back into work and was eager to begin collaborating with Demetria McKinney, an actress/singer who was ready to take her music career to the next level. NeNe arrived in Tampa, FL ready to go live on the air for the debut of her clothing collection. Meanwhile, Kenya met with prominent producer Roger Bobb and discovered a surprising revelation. Kandi got the cold shoulder from Mama Joyce while attending the family BBQ and Phaedra got some advice on how to tell her boys about Apollo’s impending jail sentence. As the ladies gathered to support Demetria for the debut of her music video, the celebration became a bit uncomfortable when Apollo showed up to confront Phaedra face-to-face about the issues surrounding their marriage. Did you watch the last episode? If you missed it we have a full and detailed recap, right here for you.

On tonight’s episode as per the Bravo synopsis, “Kandi can’t seem to keep the peace with her family, causing Todd to suggest an alternate solution. Phaedra looks ahead toward life as a single parent, while Claudia’s mom and grandma touch down in Atlanta to have some fun on the town. Kenya looks for office space to help with the launch of her new ambitious business plans and also accepts an invitation to sit down with NeNe, Cynthia, and Porsha — which ends with a surprising conclusion.”

Phaedra is still reeling from that confrontation she had with Apollo last week. It seems he fails to understand how a marriage should work. And everytime she’s tried to help him in the past – he’s ignored her.

So, right now, she’s just tired of putting up with him and his ridiculous behavior. Because, no matter what, Apollo can’t accept accountability for anything. His marriage is failing and automatically it must be Phaedra’s fault.

And yet the two of them share children So, although, Phaedra is at the point where she can’t stand to be near her husband – she’s willing to sit down with him in order to dicuss what’s best for their two boys. But when it comes time to talk about the boys – Apollo would rather be at the club trying to enjoy his last few days of freedom than at home with small kids.

Meanwhile, as Phaedra is going through this obvious tough time, she’s surprisingly not turning to the other housewives for help. Then again Nene, who herself has had experience with a both divorce and being single, is at this time choosing to focus on repairing Cynthia and Porsha’s relationship. Porsha and Cynthia had a thing and because Nene is (currently) working on her relationship with Cynthia – she wants to find a way all three of them could be friends.

As for Kandi, she’s actually busy with her own family drama, but she still finds time to check in on Phaedra.

Like always, there’s drama surrounding Kandi’s mom Mama Joyce. And seeing as Kandi can’t seem to be able to control her mother – the other woman ends up taking one small issue and running with it. Take for instance the problems with Todd’s family. Mama Joyce had thrown some hurtful words at Todd and his mother. And in turn Todd’s mother had told Kandi that she was going to have to check Mama Joyce. Which is naturally when someone calls you a “prostitute”.

But then Kandi told her mother what Todd’s mother had said. And now Mama Joyce is offended. Apparently she doesn’t like it when people threaten her and now she’s more set than ever on not apologizing.

Then, seemingly out of the blue, Nene arranged a sit-down. She wanted Porsha, Cynthia, Kenya, and herself to have lunch together. Kenya kind of being an add-on.

Nene doesn’t say what the lunch is about but she issued Cynthia instructions to come and bring Kenya with her. And so Cynthia thinks the lunch is to clear the air. On Kenya’s part, however, she senses a trap. She feels like Nene is going to get one of her friends to say something and she’s weary about going to the lunch. Though she’ll still end up going just to see what happens.

Lately, Kenya has been looking at office space for her newest business venture (that’s how confident she is about the business working out) so she’s in a good place right now and thinks she can handle whatever Nene or her crew will throw at her.

Though, at least, she doesn’t have to deal with the elderly coming to blows. After Kandi had spoken with her mother, she told Todd what Mama Joyce had to say. And it looks like he’s had enough with Mama Joyce. He told his wife he’s tired of telling his own mom to be the bigger person. So the next time the mothers see each other (like on Thanksgiving) he told Kandi he wasn’t going to stop his mom from doing what she wants. Namely punching Mama Joyce if the other woman continues to cross the line.

And Kandi told him that Mama Joyce wasn’t just going to sit back if she got hit. So that’s that.

Elsewhere, new girl Claudia has run into some of her own mama drama. Her mother and her paternal grandmother came down to see her. And for some reason a 41 year old is still caught up in the idea of trying to make these two women bond. But her plan doesn’t seem to be working. The women are completely different (politically and ethnically) and brining up her dating and issues which inevitably leads back to her troubling relationship with her father – doesn’t having them agreeing on him either.

Later, when the lunch did happen, neither Porsha nor Kenya knew about that the other was going to be showing up. So at first they were put off. But they did try to make the most out of the lunch.

Though Kenya kept putting her foot in it when she would come in between Cynthia and Nene. Cynthia and Nene were honestly trying to mend fences and while Kenya wasn’t saying anything that would upset that – Nene didn’t like it when Kenya kept butting in with her little suggestions. So she voiced that and eventually Kenya got the picture.

However, Kenya would go on to interrupt Porsha and Cynthia as they were talking. And unlike Nene, Porsha wasn’t going to voice her discontent in a calm matter. So things did get awkward and luckily Nene did keep the girls from getting out of line with each other.

She had Porsha and Kenya talk to each other directly. And at the end of their discussion – everyone agreed to move on. But this group of women never seem to be able to actually let things go!

So I’ll guess we’ll simply have to wait and see who’s going to be fighting next week?