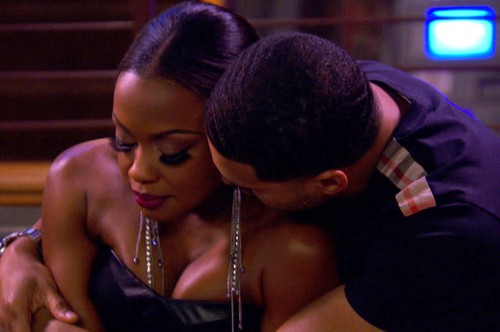 Tonight on Bravo, The Real Housewives of Atlanta continues with an all new Sunday December 21, season 7 episode 7 called “Nice to Metria,” and we have your weekly recap below. On tonight’s episode, back in Atlanta after a trip down the memory runway, Cynthia dives right back into work and is eager to begin collaborating with Demetria McKinney, an actress/singer who’s ready to take her music career to the next level. NeNe arrives in Tampa, FL ready to go live on the air for the debut of her clothing collection.

On the last episode, Cynthia and NeNe continued to hash out their issues and struggle to make amends. Phaedra kept her mind off of Apollo’s drama by delving into work, including a new case involving Derek J. Meanwhile, it was New York Fashion Week and Cynthia made her comeback on the runway. Kandi also journeys to the Big Apple to visit Todd’s mother, Sharon, and was forced to defend herself and her mother once confronted by Sharon’s allegations about Mama Joyce. Did you watch the last episode? If you missed it we have a full and detailed recap, right here for you.

On tonight’s episode as per the Bravo synopsis, “back in Atlanta after a trip down the memory runway, Cynthia dives right back into work and is eager to begin collaborating with Demetria McKinney, an actress/singer who’s ready to take her music career to the next level. NeNe arrives in Tampa, FL ready to go live on the air for the debut of her clothing collection. Meanwhile, Kenya meets with prominent producer Roger Bobb and discovers a surprising revelation. Kandi gets the cold shoulder from Mama Joyce while attending the family BBQ and Phaedra gets some advice on how to tell her boys about Apollo’s impending jail sentence. As the ladies gather to support Demetria for the debut of her music video, the celebration becomes a bit uncomfortable when Apollo shows up to confront Phaedra face-to-face about the issues surrounding their marriage.”

Kandi’s Aunt Nora is hosting a family cookout and so Kandi just wants to enjoy the day with her family without all the drama that tends to follow. She recently came back from New York where she had to defend her mother against Todd and his mother. So the one thing she doesn’t want to happen at this cookout is a fight between her and her mother.

However Mama Joyce is angry at Kandi. She feels like her daughter has done her some wrong or another and after ignoring her only living child for most of the cookout – Mama Joyce’s sister stepped in to mediate.

Hence Kandi ended up going to her mother and apologizing. Although the truth is she didn’t do anything wrong. And despite being the first to try to make a concession – her mother only grudgingly accepted the apology.

Meanwhile, across town, Cynthia and Peter were sitting back and talking to their good friend Demetria McKinney when they heard about some unfortunate gossip that’s been circulating the Atlanta scene. It seems rumors about Kenya and the entrepreneur Roger Bob are everywhere. And his girlfriend Demetria feels like Kenya should have been the one to deny these rumors. You know, rather than the guy that’s actually in a relationship.

Anyways, Demetria was bit standoffish when the couple asked her to come to one of their events and that’s when all the Kenya business came out. And though Cynthia was quick to deny any Kenya rumors – Demetria still wasn’t buying the whole no fire where’s the smoke.

And funnily there really is no story this time. Kenya was pictured with Roger Bob once and after that it’s been nothing other than business on that end. In fact she even told her good friend Claudia that maybe she should go after him. And it was while she was matchmaking Claudia with Roger that Cynthia spoke up to tell them about Demetria.

Kenya says nothing happened and she went on to add that Roger had dated several friends of hers over the years. So even if Demetria is right about being with Roger for 8 years – Roger surely hasn’t been acting like it.

As for Phaedra, she’s been wondering if she should tell her boys about Apollo upcoming prison stint. At the moment she feels like they’re too young to deal with that but everywhere she goes she had her well-intentioned friends telling her her boys deserve the truth.

So while Phaedra is debating what’s right for her family – her husband is nowhere to be found!

Later, Kenya went to Roger Bobb’s. She wanted to work on a project with him or at least being discussion for one and as she was already there – Kenya’s nosy self asked him about Demetria. And Roger said Demetria was his woman. Though he also admits to their being on and off over the last several years.

But to clear up any misunderstanding, Roger has invited Kenya to Demetria’s event. He thinks the two women will like each other and meeting face to face will help lay to rest any nasty rumors. So Kenya, hearing where Roger is coming from, accepts the invitation.

The event is a release party for Demetria. She’s launching a music career and the release of her latest music video is something to be celebrated. Yet Roger, Demetria, oddly doesn’t show up at this event he invited Kenya to.

Apparently, he’s working and because of that he’s going to miss out on celebrating Demetria’s big event. So really it was just the women there when it came time for Demetria and Kenya to meet. And depending on who you ask – the event might have been their second meeting.

Demetria claims to have met Kenya tean years ago but Kenya doesn’t remember that meeting so her first impression of Demetria was the other woman going in on the Roger rumors. Luckily, the two women did eventually see past the Roger situation. But sadly Kenya is, well, Kenya.

In her confessional, she threw all sorts of shade at Demetria and Demetria’s relationship with Bob.

And speaking of people that should know better by now, Apollo finally showed up and it was at Demetria’s party. It seems that he was just going to hand out yet he changed his plans when he spotted Phaedra at the party.

Once he saw his wife, Apollo honed in on her. Suddenly he wanted to talk to Phaedra about their relationship and where it’s going though he hasn’t stopped by the house in days.

His excuse is that Phaedra doesn’t tell him she loves him or tries to cuddle with him when he’s home. So in his mind, he doesn’t have a reason to return home if that’s all he’s going to get from her. But on Phaedra’s part, she doesn’t like him trying to confront her at the bar.

So their relationship remains at standstill. No one has mentioned divorce to the other but there’s no way these two can stay married!