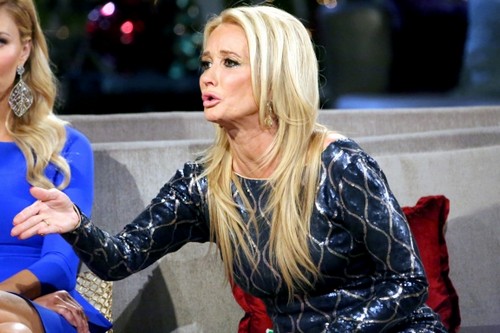 The Real Housewives of Beverly Hill‘s returns to Bravo tonight for what is always one of the best parts of each season- the reunion! Tonight is part 2 of 3 and the 90201 ladies reunite, Lisa and Kyle face-off, while Brandi shares more about her tough year.

On last week’s episode the gripping, three-part Beverly Hills reunion began as Andy Cohen questioned the women about the dramatic twists and turns of Season 4. Joyce and Brandi proved that there was no love lost between them, and the women explored what happened when the “dream team” of Yolanda, Lisa, and Brandi started to show its cracks. There were light moments as well, as Kim discussed her favorite season yet.  Did you watch last week’s part 1 of the reunion show? If not we we blogged it and you can read the full detailed recap right here.

On tonight’s episode the Beverly Hills housewives share laughter over their health and beauty regimens and shed tears talking about their children who are growing up and leaving home. Brandi delves into the tough year she’s had, while Kim doesn’t hide her conflicted feelings about Lisa.

This last season saw probably what was one of the biggest and yet somehow the stupidest fight on TV. Kyle and Carlton were only introduced this season and they never really rubbed each other the right way. Even in the very beginning!

Carlton says it’s because she always felt that she was being goaded. Particularly on her religion seeing as it was constantly brought up in conversations and probably way too many people started to freak out on the whole hexing scenario. Carlton does admit to dabbling in witchcraft but no one has asked her why?

She got involved in it to escape some dark periods in her life and now she treasures it for helping her get to the point she is now. But for Kyle to call the pentagram on her neck “the star of the David” was literally the last straw for Carlton. She couldn’t understand how a Jewish person could confuse the two and so she felt like she was being provoked once again. And the fact that Kyle knows about her religion and still made a comment like that just made Carlton see red!

They stopped being “acquaintances” from then and all the party afterwards served to do was cut off ties between them.

What happened at the dinner party was merely continuation of that never ended. The ladies had gotten into a fight and Kyle called Carlton anti-Semite. She admits now that she regrets throwing out the word though she would have much preferred it for Lisa to have said something then and there rather than save her criticisms for her blog.

So that’s what Kyle most remembers and still she doesn’t get why Carlton never got along with her. How about its because Carlton is sensitive and she always felt dismissed by the other woman? So in her position now, where she hears what’s technically “their fight” become about Lisa; why should she ever change her mind about Kyle?

All fights manage to become about Lisa for some reason! And why is that? What is so magical about one person? Lisa herself has voiced the same curiosity. She’s honestly curious why so many who want to be friends with her then have such nasty things to say. Take Kim’s daughter’s graduation party – Lisa was unable to attend and it turned into this big thing that never really went away.

Yolanda and Kim had a tough time of saying goodbye to their eldest this year and on top of that having Lisa let them down merely added unnecessary stress. With Kim’s situation, she felt like she needed all those closest to her around. So she invited Lisa to the party and Lisa had told her she’d be out of town. Ok, Kim had no problem with that. Yet Lisa came back early and chose to have dinner at a top restaurant when she could have made the party.

When Kim told her that her hairdresser saw at the restaurant, Lisa at first denied it. She denied it and then claimed to later remember. Kim was hurt by it though she didn’t think it warranted Ken to get an attitude with her for being upset.

Kim says Ken has a mean streak. Lisa hates that Kim is making such a judgment about her husband yet that doesn’t change the fact that on several occasions Ken has gotten involved in the women’s fight and was called aggressive. It’s why Kim flipped out on him in Puerto Rico and called him a “stupid old man”.

Kim apologizes for it now. She knows it was uncalled for but the same way she’s given an apology is the reason she wants one back. Because she wasn’t the only person that was rude – Lisa and Ken were dismissive of her and bring up her sobriety was also uncalled for.

Lisa doesn’t see that way and despite Brandi, Yolanda, and Kim trying to explain the situation to her; Lisa still refuses to see how she might have hurt Kim.

Moving along, the next subject Andy Cohen brought up was Brandi. Brandi went through a lot this year and Andy asked her about it. Brandi admitted to being severely depressed with all that was happening and understands if she was hard to handle. While Joyce, with further prompting from Andy and “his tweets”, believes that none of what was going on excuses Brandi in anyway.

She said plenty of people have battled depression without using it as a get out of jail card! Is she right? Was Brandi overplaying her depression to excuse her drinking and bad behavior? Or was this just the lowest moment