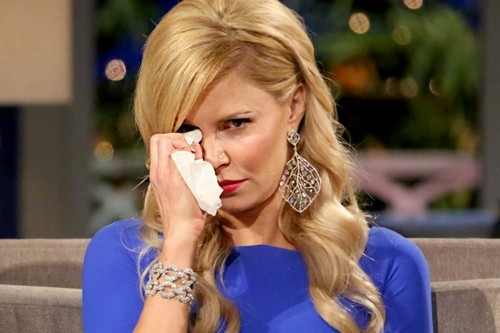 The Real Housewives of Beverly Hill‘s returns to Bravo tonight for what is always one of the best parts of each season- the reunion! Tonight is part 3 of 3 and the women continue to try to hash things out with Lisa, while the husbands join the fray, as Ken defends his wife.

On last week’s episode the Beverly Hills housewives shared laughter over their health and beauty regimens and shed tears talking about their children who are growing up and leaving home. Brandi delved into the tough year she’s had, while Kim doesn’t hide her conflicted feelings about Lisa.  Did you watch last week’s episode?  We did and we have a full and detailed recap right here.

On tonight’s episode in Part 3 of the dramatic Beverly Hills reunion, Lisa is in the hot seat as Yolanda, Brandi, and Kyle all discuss the problems they’ve had with her while, at the same time, hope for some resolution. The husbands join the fray and Ken tells a teary Brandi that he may never be able to accept her back into his life. Or can he?

Part Three of the Reunion that just won’t end (even for its own good) opens with Lisa’s behavior this season. Or more importantly what others found wrong with her behavior.

Brandi was upset with the way Lisa’s relationship with Scheana was handled so she again confronted Lisa about it. Andy wanted to know what was her main problem with Scheana and Brandi said that she it was hurtful the way Lisa never seemed to acknowledge her feelings – she doesn’t like Scheana and she doesn’t feel like her ex-husband side piece should be constantly thrown in her face nor does she likes to watch VanderPump Rules and see the close bond between Scheana and Lisa.

The later was the part that especially hurt the most. Because it felt she was being cheated on all over again.

She’s already spoken to Scheana and that was for Lisa, but to find this woman always in her face was too much. Like in one case when Brandi had brought along a date with her to one of the events and Scheana had purposely flirted with him just to get a reaction from Brandi. Joyce doesn’t believe her version though the only one that can hear her clearly is Yolanda who’s stuck sitting next to her.

Another gripe is that Brandi felt like Lisa dropped her as a friend when she started to go downhill. Once it began to get worse for Brandi, her former best friend stopped calling to strategize. Now Lisa denies holding these talks, but Kyle clearly remembers from her days as Lisa’s best friend.

That’s why she knows how much Lisa plans. Both Kyle and Brandi have said that she’s a master manipulator and Lisa disagrees. Yet it all goes back to her bringing up the tabloids. Lisa was the first to bring up the cheating rumors and she did so in front of Kyle’s daughter.

Lisa said she did that to diminish the rumors, but how is it diminishing it when she keeps mentioning it and she introduces the subject on TV?

Kyle just wanted her to take some accountability and after a while Lisa does. She doesn’t admit to wanting to hurt Kyle though she does acknowledge her idea of “diminishing” could have been wrong. And she does the same with Brandi. Lisa said she was sorry about the way Scheana was kept around ( as if it was only the producers that made that decision).

Although she does wonders why these ladies want to be friends with her. If she does all of this then why are they still saying they want to be friends? Kyle says that its ok to accept other people flaws ( which is funny coming from her).

When Carlton tried to defend Lisa against Kyle, Kyle told her not to make the situation about herself because nobody cares.

Well, some people do care and when the husbands are brought out Carlton soon learned that she was a big topic over at Joyce’s house. They got a pastor and rabbi to bless their house and Joyce’s husband has been wearing a charm ever since he found out that Carlton had jokily put a hex on his family.

And nothing riles Carlton more than when someone makes snap judgments about her and her religion. Michael had said he investigated it and found it peacefully beautiful and so he couldn’t understand why Carlton would claims to be a part of it.

Now Joyce, who had cleared up the hexing thing with Carlton months ago, is also agreeing with her husband. She’s trying to claim that Carlton is a threat despite the fact that Carlton had sworn she doesn’t practice black magic anymore.

And as for the rest of the husbands – Ken and Mauricio were able to remain good friends even though Lisa said she couldn’t say for sure that Mauricio hadn’t cheated. Lisa did a lot of things that Mauricio doesn’t agree with and he never held it against her and that primarily has to do with his relationship with Ken.

Ken was man enough to apologize for certain things he did and he said sorry to both Yolanda and Kim for his bad choice of words. He still doesn’t think he ever grabbed Yolanda but that’s beside the point. It doesn’t start another argument and good riddance.

Ken went on to say what Lisa couldn’t or wouldn’t. He does admit that he and Lisa withdrew from Brandi. So she wasn’t just making it up!

The couple had disagreed with some of the thing Brandi did and they withdrew from her and in return she lashed out this season. Ken said he could never forgive her, but that probably won’t last seeing as everyone knows he’s the forgiving type.

So all in all everyone left on pretty much good note. That is except for Carlton and Joyce but odds are they won’t be returning next season. Rumor has it that Andy dropped them and just looking back at the reunion it’s easy to see why. If they can’t pull the conversation away from the core group then they start to come off as boring!