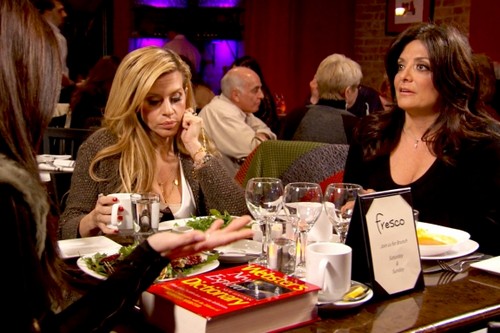 Tonight on Bravo The Real Housewives of New Jersey starring Teresa Giudice and the rest of the housewives continues with an all new Sunday October 26, Season 6 episode 15 called, “Secrets Revealed Part 1.” On tonight’s episode during a bonding trip to Atlantic City the ladies of NJ bare it all, unveiling scandalous secrets, skimpy clothes, and sexy dance moves!  If you want to read some juicy spoilers of all the drama that will be going down on the Reunion show Nov 2nd, we have you covered, right here.

On the last episode as Dina’s Ladybug Charity event fast approached, simmering tension between Teresa and Teresa over the Rino rumors threatened to derail the festivities. Meanwhile, Melissa and Joe broke ground on their dream home, and Amber lost her hair again, but this time for a good cause. Finally, after pleading guilty to multiple fraud charges, Teresa and Joe Giudice learned their fate in federal court. Did you watch the last episode? If you missed it, we have a full and detailed recap right here for you.

On tonight’s episode during a bonding trip to Atlantic City the ladies of NJ bare it all, unveiling scandalous secrets, skimpy clothes, and sexy dance moves! Joe Giudice takes on a gamble of his own in babysitting mischievous Milania. Kathy and Teresa get into a war of words when Teresa takes offense to Kathy’s Christmas gift.

The ladies are going to Atlantic City for a weekend. Amber talks about how she’s never been away from the children for this long before, so she’s just going to drink to get through it. As soon as they arrive in the city, they go to a restaurant and start pounding down drinks.

Joe is at home alone taking care of the kids while Teresa goes on vacation. Milania calls Teresa for about the 25th time since she’s gone. ‘She’s my most high maintenance child,’ Teresa says. ‘She won’t stop stalking me.’

The ladies get ready to go gambling, and the twins are late. The other girls leave them there and go down to play blackjack.  “I don’t know blackjack from my freaking ass,” Amber says.

The twins are still getting ready when everyone else is playing.

Teresa finds it to be rude that they just left the presidential suite Nicole got for all of them unannounced.   They immediately confront the girls when they get down to the table. They start focusing on Amber specifically. “This is not a huge issue,” Amber says. “Would you like my left kidney? Would you like that?”

She and the twins get in a screaming match. “I am so sick of this,” Amber says, and the twins say she should leave then.  “I did not come to Atlantic City to babysit, and I am just over it already,” Dina says.

The girls go to a burlesque club and take a classic. Amber talks about how Melissa’s insecurities about people thinking she was a stripper when she was, in fact, a bartender.

The girls go back to the suite and talk about their first impressions of one another.calls Dina an ice princess, which offends her immediately and she says she can’t deal with them and they are too much. Melissa says she thought Amber was a know-it-all and that really hasn’t changed. When Amber protests, the girls all agree. Amber says Teresa came off to her as “tough as nails,” and Teresa says she didn’t trust or like Amber at first. Amber says she feels like they all have a great time when hanging out, but once they start talking she feels like she can’t stand them. Nicole thinks this process of revealing all their feelings is a good stepping stone in their friendship. Amber ends up breaking down and saying she can’t take this anymore, rushing off to bed.

“You hear that? That’s the sound of the twins not talking,” Dina says as the women go to bed. “Heaven.”

The women go down to the gym and Amber gives them some fitness training. “I am my most comfortable in the gym,” Amber says. “I go every day.” The ladies ask her how she knows so much about fitness. She talks about how she would work out even when she had cancer. Her heavy involvement in fitness has also included competing in competition and appearing on fitness shows. The girls go along with the workouts except Dina, who ends up lying down on a mat.

Andy Cohen has Dina as a guest. Dina says in response to a caller that she has always openly been on Teresa’s side in the argument with the twins regarding the rumor. She says the only reason she did that on camera was because she had to.

She also says she’s been in contact with Teresa “more than ever” since the conviction and that Teresa is having a hard time but really just spending time with her daughters.