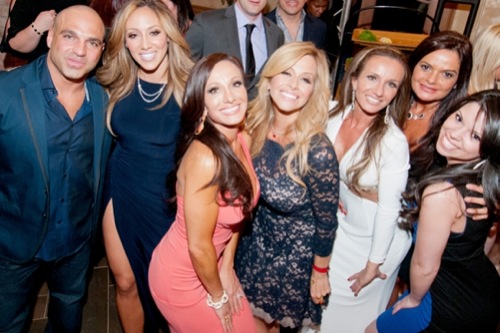 Tonight on Bravo The Real Housewives of New Jersey starring Teresa Giudice and the rest of the housewives continues with an all new Sunday October 19, Season 6 episode 14 called, “Judgment Day.” On tonight’s episode as Dina’s Ladybug Charity event fast approaches, simmering tension between Teresa and Teresa over the Rino rumors threatens to derail the festivities.

On the last episode back from their explosive trip to Florida, Teresa Giudice and Rino planned a tasting party to launch their new restaurant, but several names were conspicuously absent from the guest list — Teresa Giudice and Amber. With her Ladybug event only weeks away, Dina took it upon herself to get Teresa to apologize to the twins for spreading the rumor, but getting Teresa to apologize could be a fool’s errand. Meanwhile, Melissa questioned Amber about her home life with Jim, and Nicole met Jacqueline for the first time. Did you watch the last episode? If you missed it, we have a full and detailed recap right here for you.

On tonight’s episode as Dina’s Ladybug Charity event fast approaches, simmering tension between Teresa and Teresa over the Rino rumors threatens to derail the festivities. Meanwhile, Melissa and Joe break ground on their dream home, and Amber loses her hair again, but this time for a good cause. Finally, after pleading guilty to multiple fraud charges, Teresa and Joe Giudice learn their fate in federal court.

A federal judge sentences Giussepe to 41 months and Teresa to 15 months in prison.  Teresa invites her sister-in-law, Melissa, over to talk about everything she’s going through with the sentencing.

Melissa says she isn’t here to give Teresa stress in this hard time because stress trickles down from a mother to her children. Teresa says not everything is going to be easily, but luckily she’s a survivor.

Teresa, Nicole and Dina get ready for their Ladybug charity event, which is being held at Nicole’s house.

Project Ladybug is a fund Dina started years ago for cancer. The ticket sales for the event brought in good money for the charity, and Dina is “adamant” about having a positive atmosphere at her event. She talks with Nicole and Dina, who point out Victoria as someone not to invite because she is rude at events. Nicole says karma is the reason Teresa’s family “is being destroyed now.”  Dina says Amber told her Jim and the kids aren’t coming.

Amber’s hairdresser comes over to cut some of her hair to be donated, after having grown it out to 30” in the five years after finishing chemotherapy. ‘I think I’ve held my breath for five years, I can finally breath again,’ she says. ‘I can break up with cancer and be free.’ She talks about how she’s going to the charity event alone to represent the family.

Melissa comes to the build site where her new house will be. She talks about having been hesitant when her husband said he was going to invest so much in his new business, but of course he managed to work it out. George officially broke ground on the house. “I tell you, there’s something very about a hot guy on like, a big piece of machinery,” Melissa says. “I love me a hot construction worker, especially when it’s George Gorga.” She says she’s happy about where they are, but Teresa’s situation reminds her that at the end of the day it’s about love, not how well your life is going.

Dina is a perfectionist while getting ready for the Ladybug event. She says she’s known to be harsh because she’s a perfectionist, but the same people have still worked with her for years.

“I do always worry about bringing my kids to events that may have drama,” Melissa says, knowing Teresa and the twins will be there.  Dina and Teresa also talk about this, with Teresa worried and Dina not. “Tonight is about the cause, period,” Dina says. Teresa says they need to keep their private matters private. Dina says this is the last time she’s going to talk about it, and after that point, whoever brings it up again will definitely lose a friend.

Amber arrives at the event. ‘I do not think it was a hard decision taking my kids out of the event,’ she says. ‘I don’t trust them.’

The twins, their parents and Bobby arrive at the event. Immediately Teresa sees them and walk away and talks to Amber. “Awkward,” she says.  She says she and Amber don’t owe them an apology because they weren’t even the ones who started it, and in fact, Victoria didn’t even start it. Rino did.

Amber talks to Rino and says that anything that occurred wasn’t done on purpose. He says the only issue is that her husband shouldn’t be talking to women in that sort of way. He thinks she doesn’t realize who she is married to, and doesn’t realize what kind of person Joe is. However, he still tells her he has nothing against her family and that they should just put this behind them, which Amber is relieved by.

Teresa tells Nicole they need to “clear the air” with Teresa G. Bobby says she cannot go into it expecting an apology. They go straight to Teresa G. She tells her anyone should be ashamed to repeat such a thing. Teresa G. says she has her own problems, and Teresa says that’s why she was shocked. Teresa’s issue is that it should never have been repeated. She tells Teresa G. that nothing from Victoria Gotti should not be repeated because she’s trash. Nicole calls Teresa G. stupid. Teresa G. says Victoria never said anything nasty about them at all, and that out of the three of them she felt closest to Teresa. Teresa says she can bring up any issues regarding herself, but to leave anything about her family out with the trash, and Teresa G. agrees.

Teresa says she’s capable of moving on, she just wants her friends to take responsibility for their actions the same way she does.

Everyone watches in suspense as Teresa and Joe walk into the courthouse to be sentenced. When Joe is sentenced to 41 months and possible deportation, everyone is taken aback and most are convinced Teresa will definitely get time as well. Teresa is then announced to be sentenced to 15 months in prison. They also must pay restitution. Teresa will serve her term first, and then Joe will serve his when she returns. Jacqueline sends Teresa a heartfelt text message telling her she will always love her and if she needs anything, she’s there.

Andy Cohen brings up Teresa confronting Teresa G. at the charity event, asking if she regrets kicking her in her hour of need. Teresa says she did apologize because she came from a place of anger, but she wasn’t wrong. He brings up how they called her stupid and show well she restrained herself. Nicole says she didn’t call her stupid, but rather asked “Are you stupid?” which is apparently different.

He says Victoria Gotti got a lie detector test done and sent the results to the show, proving Rino said he had the affair. The twins say she lies about everything and they don’t even believe the lie detector test results.

A caller asks Nicole how her relationship with Bobby is going and if she believed the cheating rumors. Nicole says their relationship is going well and she never believed the cheating rumors because one of the reasons she is with Bobby because he is a man of integrity. Another caller asks the twins why they blamed Teresa G. for something Victoria Gotti said. Teresa says she never blamed her, but simply wanted her to take responsibility for her actions, apologize and admit what she did was wrong. She acknowledges no one is perfect.

Andy asks them if Jim shocked them with not only his accusation of Bobby and his airing out the rumor. They weren’t shocked, as he’s always up to things and telling stories.

A caller asks if Nicole has had a nose job. Nicole says no, but she’d like to have one. Another caller, who is also a twin, asks if the twins will now encourage Rino to take a lie detector test. Teresa says she doesn’t know how accurate these tests can be, and Nicole brings up Victoria lying about having cancer.