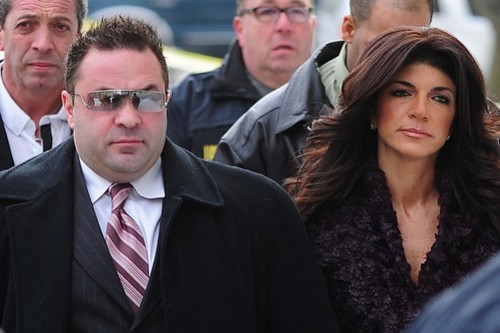 Tonight on BRAVO our favorite Housewife show THE REAL HOUSEWIVES OF NEW JERSEY returns with the eighth episode of season six called, “Guilt Trip.” On tonight’s show as news spreads about a possible plea deal in Teresa’s court case, Dina and Melissa plan a surprise getaway to cheer their friend up in her most desperate time.

On the last episode Roses were the flowers of choice in the Garden State as the ladies celebrated Valentine’s Day in their own unique ways. And in a shocking turn of events, Victoria Gotti revealed a scandalous rumor to Amber and Teresa that could shake the group’s foundation to its core. Did you watch the last episode? If you missed it we have a full and detailed recap, right here for you.

On tonight’s show as news spreads about a possible plea deal in Teresa’s court case, Dina and Melissa plan a surprise getaway to cheer their friend up in her most desperate time. Meanwhile, Amber and Nicole’s fragile reconciliation takes an unwanted detour when Amber starts texting nasty insults to Nicole’s boyfriend Bobby. Teresa and her husband Joe make a legal decision that will decide their fate and change their lives forever.

RECAP: Teresa Giudice’s court trial is affecting the other housewives in more ways than she knows. And Amber oddly enough seems to be the one taking it the hardest of them all. When she had read a story about her friends online, she proceeded to fall into a crying mess and was still crying while she called the clearly hesitant Teresa to ask her about the case.

Teresa, for legal reasons, couldn’t discuss the case and in the nicest way possible she got Amber to stop her line of slightly idiotic questioning. But no sooner was she done with her that another one of Teresa’s friends called in a panic. The story that was circulating around was the one about her husband taking a plea bargain that would save his wife from imprisonment so Dina had wanted to know if the story was true. And it wasn’t.
Once Dina realized it wasn’t then she didn’t mention the case again and you know what – her friend appreciated her all the more. Teresa is having a hard time as it is keeping her kids away from all of what’s going on in the media that all she wants is from her friends is their help in taking her mind off her troubles rather than be a consistent reminder.
And Dina came through on that again later on. Dina wanted to arrange a trip with the girls and it’s going to be all about relaxation. Well, that was their original goal but with the way this group tends to be – it’s going to be impossible taking a trip altogether without any conflict arising. Amber and Nicole are back on the outs and so a trip isn’t a good idea!

Amber had earlier tried to contact Bobby and after she realized he wasn’t going to return her calls – she sent him texts demanding why he would treat her and their friendship like that (though not as nicely as I phrased it). Wasn’t it enough for him that he betrayed Amber’s husband? Apparently not because he then showed all the texts to Nicole and her sister Teresa (with some added commentary) so now those two ladies are mad at Amber for being an over dramatic nut (their words).

However when everyone met up for Dina’s Project Ladybug meeting, they did at first try to act like ladies. As in nothing was hurtful said or viciously thrown while they got down to business of talking about possible ideas for the charity. Though there was a secret meeting off in the corner between Amber and Teresa that appeared to have grabbed everyone’s attention. And seeing as no one wanted to talk about those kinds of meetings – there was a tense few moments between all the girls afterwards.

They were able to move pass the awkwardness and to her credit Teresa then tried to put on a brave face for the remainder of the trial. But then came the day of the plea agreement and that was closet Teresa had ever been to completely breaking down. And that because it ended with both Teresa and her husband pleading guilty to the fraud charges.

The other Teresa was with her own husband when she found out about the plea agreement. Rino first concern was Teresa’s kids. As for his wife on the other hand, she wanted to know what Teresa wore to court and then she thought how nice it was that Giudices coordinated their outfits. So Rino sort of had to pull her back to reality. He told that this is serious and also she shouldn’t bring up deportation or any other part of the case to Teresa.

Teresa had issued a public apology and most of her friends (her true friends at least) know that now is the time to start moving pass the drama. It’s what Teresa going to need!