The Real Housewives of New Jersey Recap “Pack Your Bags and Get Out!” Season 6 Episode 12 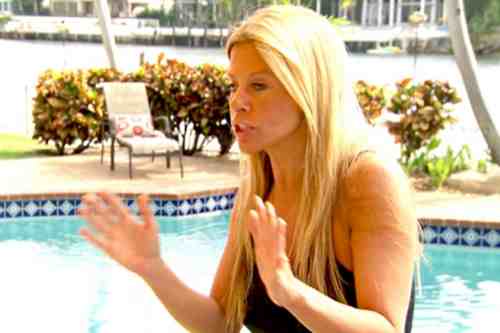 Tonight on Bravo The Real Housewives of New Jersey starring Teresa Giudice and the rest of the housewives return with an all new Sunday October 5, Season 6 episode 12 called, “Pack Your Bags and Get Out!.” On tonight’s episode the conflict in Florida heats up as Jim has a difference of opinion with Dina, Melissa, and the twins as the shocking rumor about the twins’ family is revealed.

On the last episode the trip to Florida continued as the brewing tension between Jim, Bobby, and Dina came to a head. Meanwhile in New Jersey, Teresa struggled with how to respond to Jacqueline’s texts, and Rosie’s love life hit rocky waters. Did you watch the last episode? If you missed it, we have a full and detailed recap right here for you.

On tonight’s episode the conflict in Florida heats up as Jim has a difference of opinion with Dina, Melissa, and the twins as the shocking rumor about the twins’ family is revealed. Back in Jersey, Teresa and Joe feel the weight of their legal situation and plan a getaway to New York City, while their estranged friends Chris and Jacqueline struggle to keep the spice in their relationship.

Amber’s husband just keeps stirring up trouble on their vacation. He ran his mouth (primarily about things he shouldn’t have) and that landed him in trouble with everyone including with his wife.

Jim doesn’t like the twins since their fight with Amber and that’s why he considers them beneath him. And when that happens, that blatant disregard of someone else; Jim apparently can become quite aggressive. So he told Nicole her boyfriend wasn’t going to marry her and then to twist the knife he told her Bobby was also stepping out on her.

But he didn’t want to stop there so he then went on to tell Teresa about the rumors Victoria Gotti had been spreading. Though he didn’t even have the courtesy to phrase like a rumor. He merely blurted out her husband had slept with her mother.

And seeing as Rino wasn’t there – he wasn’t there to defend himself or to comfort his wife who was a wreck after Jim went for her. So Teresa ended up leaving the house the next day because she wanted to be with her husband more than she wanted to go yachting.

As for Amber and Jim, they tried to start over in the morning. Jim stayed mostly quiet and he went about his day as if nothing was wrong. But there was and everyone in the house felt it. Plus the arguments from the night before had made everyone pretty uncomfortable. Which is why Dina decided to kick Jim and Amber out. She didn’t like the atmosphere of having them in the house and she thought the weekend could still be salvageable if they were gone.

And she was right. The second the Marcheses had shipped out – the party was back on. Although that doesn’t mean everything was great between Nicole and Bobby. Bobby hadn’t actually supported her when she and her sister were fighting with Jim. It seems he hid until the fight was over. So he might not be husband material after all.

Besides the whole hiding thing, Dina also feels like Bobby could be user. She’s under the impression he isn’t with Nicole for the right reasons (like wanting to use her for her connections) and had even tried to warn the other woman. Yet Nicole already doesn’t appear as serious about him as she did prior to this little trip so Dina doesn’t really have to worry about her.
Meanwhile Back in New Jersey, Teresa and Joe are spending as much time as possible with each other and with their kids.

But their supposed friends and family can’t understand why Teresa hasn’t reached out to them. Jacqueline chooses to believe Teresa hasn’t taken her up on her offer to be there for her because she hasn’t forgiven Jacqueline for their fight last season.

But Teresa isn’t speaking to anyone. She simply staying at home as often as she can. And while she’s there she doesn’t want her court case impeding on her life with her family. So it would help if people stop bringing the case up every little chance they got!

Back in Florida, Teresa and Rino showed up at the last minute to the surprise of everyone. The couple decided they weren’t going to run away from the rumors and had chosen to come down to Dina’s to fight them head on. However they didn’t have to worry about the people still at the house. Those people as it turned out were good friends.

And they chose not to believe those silly rumors about Rino and his mother-in-law!