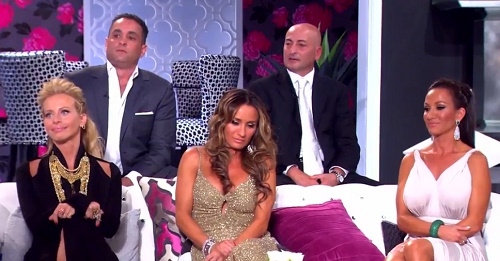 Real Housewives of New Jersey spoilers tease that Part 1 of the Season 6 reunion special is set to air on Bravo on November 2nd. Bravo has released an official spoiler video, giving RHONJ fans a sneak peek at some of the drama they can expect to see unfold on the reunion stage. The clip features Teresa Giudice, Dina Manzo, Jacqueline Laurita, Teresa Aprea, Amber Marchese, Melissa Gorga, Nicole Napolitano, and their hubbies. Season 6 was a messy, dramatic one, and it looks like host Andy Cohen plans to touch on all of the scandals during the Season 6 reunion.

Real Housewives fans were shocked when Dina Manzo returned to the reality TV show this season, guaranteeing sparks were going to fly. In the promo video for the Season 6 reunion, Andy brings up Dina’s ongoing feud with Caroline Manzo and Jacqueline Laurita. In the clip, Andy asks Dina, “You wrote in your blog about having funerals in your head for those who have crossed you. Did you do this for Caroline and Jacqueline?”

Instead of denying the claims, Dina snapped back to Andy that Jacqueline opened old wounds when she decided to rejoin the show, and it was all her fault. Dina and Jacqueline’s heated debate disgusted Teresa Giudice so much that she grumbled about how family should act towards each other and marched off the reunion stage.

The Real Housewives of New Jersey spoiler also features a screaming match between Amber Marchese’s husband, Jim, and Dina Manzo; Melissa Gorga jumping to her family’s defense; and, of course, the rumors about Teresa Aprea’s husband’s affair with her mother are addressed. So, will you be tuning in to the reunion special? What do you think of Dina Manzo’s crazy comments about her family’s funerals? Let us know what you think in the comments below and don’t forget to check CDL for all of your Real Housewives of New Jersey spoilers.