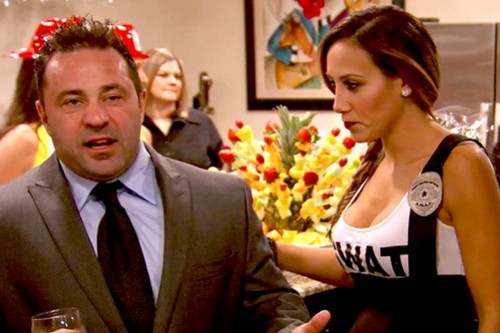 Tonight on BRAVO our favorite Housewife show THE REAL HOUSEWIVES OF NEW JERSEY returns with the third episode of season six called, “A Hairy Situation.” On tonight’s show Nicole and her firefighter boyfriend, Bobby, decide to throw a “First Responders” themed costume party together.

On the last episode Melissa tried to keep Christmas traditions alive, despite living in a rental home, while Dina felt more alone than ever as her daughter applied for college. Amber became consumed with home safety, while Teresa Aprea decided it was time for her son to join the family empire. Teresa Giudice’s legal woes hanged heavy over her family’s head as she struggled to keep things normal for her girls. Did you watch the last episode? If you missed it we have a full and detailed recap, right here for you.

On tonight’s show Nicole and her firefighter boyfriend, Bobby, decide to throw a “First Responders” themed costume party together. The party kicks off hot and heavy as Dina finds a hunky young man she may be interested in. But soon enough, the “First Responders Party” turns into a five-alarm fire when Nicole confronts Amber about the rumor she’s been spreading.

It’s nice to hear someone on this show admit that they have financial problems. Joe Gorga just started a new business and is building a house which means that he can’t afford Melissa’s car accidents. Apparently driving isn’t her best talent and she destroyed the bumper on her new Bentley. The dealer jokes that she is their best customer and Joe nearly dies when he sees the price tag. While waiting the two discuss Amber’s husband Jim and how he doesn’t want to be seen with Joe Giudice because it’s bad for his business.

On the last episode Amber let it slip to Melissa that Nicole’s marriage not only broke up but she also busted up another family. Well Melissa made sure that it got back to Nicole and now she’s out for blood. She is planning on embarrassing the crap out of Amber and making her apologize at an upcoming first responders party. Melissa, the twins and Teresa all go shopping for costumes for the party and dish on how evil Amber is. Meanwhile the constantly Zen Dina is cleaning out her closet or more importantly her shoes. Yep, that’s about all that she has going on for Bravo’s cameras to film!

This season we are seeing more of the Giudice family together and every time it feels like a life lesson moment. This time around Melani is freaking out because her ice cream needs sprinkles and Teresa gets things under control by walking out with a present in brown paper. It’s a blown up copy of the photo the whole family took together weeks ago and after unwrapping it Teresa and Joe lay on the sentiment thick.

Amber’s husband likes filming commercials for his mortgage company and he has a bunch of kids on site to help direct the latest fiasco. Nicole pays Dina a visit and after small talk about the cats Nicole zeros in on her real misson- to set Dina up with a great guy. Dina’s not at all interested now.

[9:01:43 PM] Cate Meighan: The first responders party is going to be a real trip. Everyone is dressed up in costume and Dina decides to show up after all. She’s wearing scrubs and wants to die when she meets hunky Matt who showed up just to meet her. She’s now wishing that she went costume shopping. Dina and Matt do end up talking and he asks her out on a date.  Even Rosie and Kathy are at this party and at first everyone seems to be getting along great- but Amber and Jim haven’t arrived yet.

Once Amber walks in all bets are off. Melissa is instantly trying to throw water on the fire that’s burning but it doesn’t work. Nicole decides to confront Amber in front of the whole party and grabs her by the weave. Matt pry’s Nicole’s fingers off Amber but she retaliates by throwing a drink in her face and grabbing her again. The ladies are finally separated and Nicole is laughing while Amber cry’s in the corner.

After the fight Melissa claims to feel bad that in ten seconds a conversation escalated to a hitting match. Amber and Jim go down to the area where Reno, Joe Gorga and Bobby all are and they explain that Nicole attacked Amber. It turns into all of the guys ganging up on Jim because he won’t hang out with Joe Giudice.  Needless to say Gorga now starts swinging. Tune in next week for more RHONJ!