The Real Housewives of New Jersey Detailed Recap ‘There Will Be Bloodwork’: Season 6 Episode 9 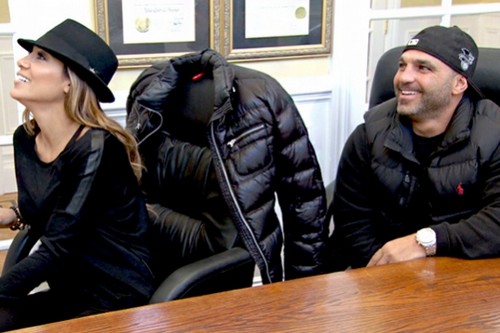 Tonight on Bravo The Real Housewives of New Jersey starring Teresa Giudice and the rest of the housewives returns with an all new Sunday September 14, Season 6 episode 12 called, “Before the Blood.”  On tonight’s episode the show continues as the ladies each deal with some monumental life changes.  Keep in mind Teresa Giudice is rumored to be considering divorce from Juicy Joe to help clean up her image and avoid being fired by Bravo.

On last week’s episode as news spreads about a possible plea deal in Teresa’s court case, Dina and Melissa planned a surprise getaway to cheer their friend up in her most desperate time. Meanwhile, Amber and Nicole’s fragile reconciliation took an unwanted detour when Amber started texting nasty insults to Nicole’s boyfriend Bobby. Teresa and her husband Joe made a legal decision that would decide their fate and change their lives forever.  Did you watch last week’s episode?  If you missed it and want to get caught up, we have a full and detailed recap, right here for you.

On tonight’s episode the ladies each deal with some monumental life changes. Dina says goodbye to her long-time assistant Luke, while Teresa and her husband Rino tackle a medical scare. Meanwhile, the Giudices strive to live a normal life amidst the cloud of their guilty plea and Amber receives startling news from her doctor.

Teresa has been trying to keep things relatively normal around the house. She’s a mother so of course she has a routine of waking up her daughters and getting them prepared for school. And she’s been keeping to that routine as if there’s nothing wrong even though both she and her husband have already pled guilty to federal charges.

Yet the only one that’s aware of that fact is her eldest. The teenager knows what’s happening – she’s not blind after all. And her parents have been in the news for weeks now. But her younger sisters still don’t know what’s going on so currently she finds herself pretending everything is fine for their sake.

No one really wants to burst the bubble they’re all in! At least not with the kids!

Hence, that’s also why when Amber had called previously – Teresa and her daughter had both gotten angry. They like Amber but Amber has a tendency to call and go in with the questions. It’s like she needs answers about every little thing involving the case or she’ll die (that’s how she makes it sound). And often these calls enrage Teresa. She constantly has to tell the other woman that she can’t discuss anything at the moment and yet does Amber get that – no!

When Amber gets worked up into a frenzy then it’s like all of her good intentions have simply flown out the window. And throughout the calls – she stops being the friend she set out to be. Amber has been doing that everytime she calls Teresa and recently she’s been freaking herself out over her five year cancer check-up.

If it’s back then it’s back. However Amber isn’t even waiting for the test results to come in before she starts to wonder how the cancer will affect her family. Meanwhile the other Teresa and her husband are also facing things they can’t hide from. Like Rino’s age and what that could mean for his health. But they’ve chosen to remain positive while they await test results.

When they hosted Sunday dinner, their household ran like usual. And Rino was actually taking laxative at the time in order to prepare for his colonoscopy. Though did that make them press pause on their dinner plans – no it did not. They carried on and their guests, Dina and her daughter, felt comfortable enough at the dinner that they weren’t afraid to talk about their friends.

For instance, the ladies (Teresa, Dina, and Nicole) talked about the Giudices. Dina is the closest to Teresa yet she didn’t necessarily want to talk about them. She wanted to discuss Amber and Amber’s relationship in regard to Teresa.

Dina has been feeling turned off by Amber’s behavior. She didn’t like the way the other woman came for Teresa nor did she believe the intentions behind it were all that pure. Dina thinks Amber wanted to know about the case because secretly she’s just a gossip that wanted to get the scoop first. And seeing as the other girls at the dinner weren’t that big of a fan of Amber’s – no one came to her defense.

Being accused of gossiping is a huge thing on these housewife shows. Though all of them apparently do it!

Later, Teresa changed her mind about the trip to Florida and so Dina came by her house for a quick chat before she continued on the girl’s trip. But their little “talk” turned out to make things uncomfortable between them.

Teresa finally spilled the beans on what Victoria Gotti told her and Amber – and Dina doesn’t believe it. She met the twins’ mother and she likes the sweet old lady. So much so that she’s willing to defend her.

But now that the rumor is out there – Dina has to be the one to tell the twins about it!