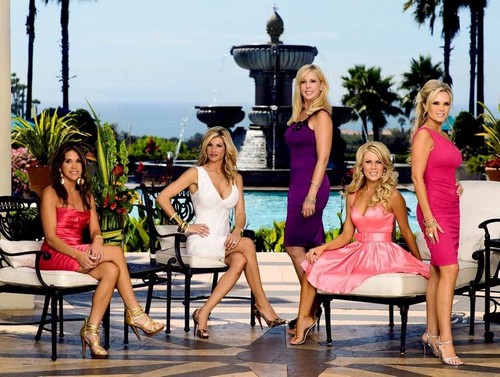 The Real Housewives of Orange County returns to Bravo tonight. On tonight’s episode called, “Pretty Ugly,” Tamra and Heather attend a holiday party. In addition, the ladies meet Lizzie Rovsek, a former beauty queen; Shannon goes on a romantic weekend getaway; Vicki focuses on business and a quest for happiness; and Tamra has an important talk about a possible new addition to the family.

On last week’s episode the dinner party continued at Shannon’s OC home, and while the ladies hopped onboard the fun bus, Heather seemed to have been left at the station. As Heather left town for the holidays, the ladies met for a “Fakes-giving” Feast where they air out their grievances.  Did you watch last week’s episode?  If you missed it we have a full and detailed recap, right here for you.

On tonight’s episode Tamra and Heather are invited to a holiday party where fashion takes a back seat to charity and the girls meet Lizzie, a former beauty queen. As Vicki focuses on business and the pursuit of happiness, Tamra and Eddie have a heart-to-heart discussion about the possibility of a baby.

Tonight’s episode of Real Housewives of Orange County kicks off with Shannon and her daughter Stella. David informs her that he got them a nice room at the St. Regis and they are leaving in twenty minutes. Shannon is through the moon, she has been begging David for a night out forever. David’s sister Lori arrives to watch the kids, and David and Shannon head out.

At the insurance company Vicki’s decorator Kelli pays her a visit. Now that her house is empty, she hates being alone, so she is going to remodel her office so that she can spend more time there.

Shannon and David arrive at the St. Regis and Shannon is pumped for alone time. The concierge shows them to their room and David wants to order bloody maries and put on the hotel robes and relax.

Tamra and Eddie get decked out in their ugly sweaters and head ot an ugly sweater charity party. Meanwhile Heather is en route to the party too, and skeptical about seeing Tamra after their fight.

Lizzie and Christian arrive at the ugly sweater party. Lizzie is isn’t even drunk yet and she stumbles and falls, she tries to brush it off like it didn’t happen. Eddie and Tamra arrive at the party and are relieved to see they aren’t the only ones wearing ugly sweaters. Tamra doesn’t see why they couldn’t have a “Pretty Sweater Party.” Tamra is introduced to Lizzie and she is shocked that they are neighbors and she goes to one of Eddie’s classes. She announces that she and Lizzie are going to be BFF’s.

Vicki and her boyfriend Brooks head out to dinner after she gets out of work. They discuss Brooks ongoing feud with her daughter, who insists he never apologized. Brooks did apologize, but he would like to reach out to her daughter and sit down and talk to her about what he said. Brooks does make it clear that he has no desire to be around Vicki’s friends though.

Shannon and David head down to the restaurant in the hotel for dinner. Shannon gets offended because David hints at her about getting a boob job, he doesn’t think they need to be any bigger, he just wants her to “firm them up.” Shannon gets teary eyed when they begin discussing that David “doesn’t make her a priority.”

Meanwhile at the Ugly Sweater Party Heather is getting to know Lizzie. Heather thinks Lizzie is the “total package,” she’s beautiful-but she is surprised to realize that Lizzie is actually really smart too. Tamra is excited to see that “sweet Heather” is at the party and not the Heather that talks own.

Shannon and David finish dinner and head back up to their room, David surprises her with rose petals all over the bed. Shannon is moved, she thinks it’s a very romantic gesture.

The next day Lizzie gets ready for her swimsuit photo shoot at the beach house. Her husband Christian is stuck home with their sons, while she heads to the beach. Before she leaves she reminds him that he is in charge of cooking dinner. Lizzie arrives at the beach and gets her model Mabelynn ready and the photographer begins shooting her in the suits that Lizzie designed.

Tamra and Eddie head out to dinner, which is a rare occurrence. Tamra feels like she never gets to see him because their life is so busy. Tamra is a little taken aback when she realizes that Eddie took off his wedding ring. He has some sort of excuse about putting it in the box and forgetting to put it back on. Tamra brings up the topic of having a baby with him, and he shuts her down and informs her he is perfectly okay with not having to raise any children. Tamra thinks he is just “afraid to be a father.” He finally caves and says they can have a baby, but he isn’t raising the baby, because he “doesn’t have time for that.” Tamra breaks down and confesses she just wants a baby that Simon can’t take away from her.