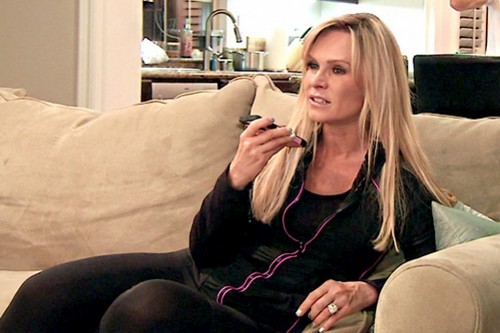 The Real Housewives of Orange County returns to Bravo tonight. On tonight’s episode called, “All Apologies,” the women gather at Vicki’s for a post Bali dinner party and with leftover tensions from the trip still running high, the ladies lay everything on the table.

On the last episode it was more fish-out-of-water time for the ladies in Bali as everything seemed to be more fun than a barrel of monkeys. However, beneath the surface, tensions escalated as Shannon and Lizzie compared notes and realized Tamra had poisoned their budding friendship. Then, Vicki was shocked when she heard allegations that Tamra had been talking trash about Brooks. Although Heather began to see some hope for reconciliation between her and Shannon, everything came to a head at dinner when the ladies confronted Tamra about being two-faced. Did you watch last week’s episode? If you missed it we have a full and detailed recap, right here for you.

On tonight’s episode the women gather at Vicki’s for a post Bali dinner party and with leftover tensions from the trip still running high, the ladies lay everything on the table. Tamra comes face-to-face with Brooks, and an apology from Shannon’s husband David sparks an unexpected fight. Meanwhile, Vicki’s daughter Briana and Tamra’s son Ryan officially say goodbye to the OC, leaving their mothers in tears.

On tonight’s new episode of The Real Housewives of Orange County, Tamra is still hung up on what happened in Bali. She had taken an earlier flight home in order to escape the drama overseas (she claims she was feeling set upon) yet she also wants to go to Vicki’s party now that everybody has returned to the OC.

Not even Tamra’s own husband understands that logic. He doesn’t think she should go and the only reason that she wants to go is because she thinks she can clear the air with all of her friends. Shannon, Lizzie, and Vicki all had something to say about her when they were in Bali, but Tamra wants to see if they’ll stick to their stories at the dinner. She had ran away the last time accusation were being flung her way and this time she doesn’t want to back down. Instead she wants to defend herself.

Since the trip, though, Tamra has heard back from Heather and the two of them have managed to get back to their old friendship. As in they’re jointly disliking someone else. This time that someone else just happens to be Shannon.

Heather hadn’t liked the way Shannon acted on the return flight coming home. In her opinion, Shannon was actively striving to continue the rift between Vicki and Tamra by saying things like “don’t let Tamra fool you” and “you have to be strong” about what type of behavior she’s willing to accept from her friends. And Tamra, upon hearing this from Heather, said that’s exactly how Shannon reacted with her when she was having problems with Heather. So Heather and Shannon are back on the outs again.

Although Shannon hadn’t known that when she told her husband to apologize to Heather for an earlier comment the other woman had found offensive. So he was taken aback after apologizing over and over only to see for himself that Heather and Terry weren’t going to accept his apology. According to him, they were giving him a look. One he didn’t really appreciate seeing at he did try to come to the party with the best of intentions.

As for the party, it started off slightly shaky. A lot of people were holding it in certain grudges and Vicki was enjoying herself. Her party was beautifully decorated and all she wanted was for everyone to have fun. But Tamra couldn’t let bygones be bygones!

She brought up the game and that got the ball rolling for everyone else. She wanted Lizzie to suddenly change her story and admit to saying she wanted to screw Eddie. And she never did. Even when others started to chime in and agree with Tamra. She wasn’t going to give in (not with her husband there anyways) and Tamra was pushed into accepting that.

But the argument between Tamra and Lizzie slowly began to focus on entirely different subject matter. Like Shannon and Heather which was probably the ugliest fight because Terri brought up David’s comment. The one he had already apologized for and. Teri and his wife then proceeded to tear David down. It was a complete character assassination. Terri called the other man dumb several times and even threw in a penis comment. Also Heather offered to give David a dictionary so that he knew all the big words Terry was calling him.

It was horrible to watch and yet Shannon managed to keep her cool throughout all of it. She said she was done with all of that. She had come back from Bali with a new peace of mind and she didn’t want to ruin that with pettiness. And all this fighting was petty. The Dubrows and the Beadors don’t get along – end of story. Other people had said worst things than David at the groundbreaking ceremony so it’s not his comment that’s stopping them from being friends. They just aren’t friends.

And after Tamra and Brooks spoke, he was fine with her and if he was ok with her then Vicki doesn’t really have a reason left to complain.

So this season somehow ended on a positive note. Once they had stopped fighting – the group enjoyed the rest of Vicki’s party and then went home like normally sane people would do. No one stuck around to air more petty grievances. However it is worth noting that David and Shannon have decided to downsize their lives by moving. That means their current house is on the market and it should be noted that it’s merely coincidental that they are now moving while the Dubrows are preparing to move into their current neighborhood.

I honestly don’t think that was planned and really who would sell a near 14 million just to escape their neighbors? That’s insane!