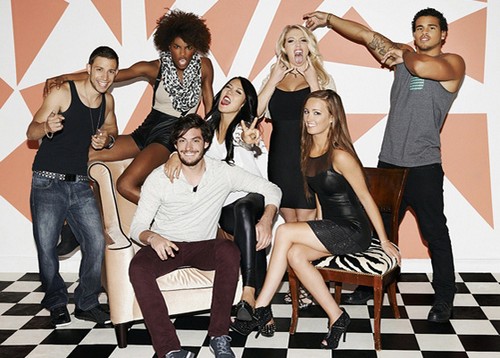 Tonight on MTV THE REAL WORLD EX-PLOSION continues with a new episode called, “Betrayed and Beatdown.”  On tonight’s episode Jenny seeks revenge after Brian cheats on her; Jamie creates drama between Jenna and Jay by revealing a secret.  Did you watch last week’s episode?  We did and we recapped it right here for you.

On last episode Lauren told Cory she was pregnant, and he immediately got angry especially after realizing that it was not his baby. Lauren decided to go home in order to deal with her situation. Arielle had to confront her self-identity issues when Ashley began having a problem with her androgynous clothing and learned that people on the internet thought she was transgender. Brian and Jenny were finally in a good place, until Brian kissed another girl while hanging with the guys.

On tonight’s episode Jenny seeks revenge after Brian cheats on her; Jamie creates drama between Jenna and Jay by revealing a secret.

Tonight’s episode is going to be another drama packed one, which you won’t want to miss. So be sure to tune in for our live coverage of MTV’s The Real World Ex-Plosion Season 29 episode 8– tonight at 10PM EST!  While you wait for our recap, hit the comments and let us know how excited you are about the new season of the Real World Ex-plosion tonight.

We left off last week with the boys having a wild night out. Tonight the show opens with Brian sharing with Cory his guilt from the night before. He feels bad…and a little scared…about what he did for fear Jenny will find out. He is trying to figure out how to tell her because he needs to get this off his chest.

Jay and Jenna are getting along really well but Jay does NOT want a title on their relationship. Jenna and Hailey go out to tan and Hailey shares her desire to meet someone. Back at the house Thomas shares the details of his relationship with Hailey with the roommates. Jamie doesn’t seem to happy hearing the details.

Brian is still being whiny and wimpy and is curled up in bed because he is so stressed about how to tell Jenny what he did. Everyone is going out partying but Brian stays back. At the club, Hailey is flirting with other men and is is not sitting well with Thomas.

The next day, Cory, Jay and Jamie are working out and Jamie sees Jay’s flirting firsthand and he picks up on a woman and gets her number while working out. Back at the house, Jenny and Brian head out to eat. Brian planned to tell her in a public place so she won’t go too crazy. He cannot even just tell her what happened. He is basically half telling her things and told her he “thinks he got her number or something like that.” He goes on to tell her he kissed the girl as well. Jenny tells him at that moment that she thinks they should not be together. She was very upset with him, but somehow managed to make it through her full dinner, and even brought a doggie bag home. She walks ahead of Brian and locks him out. Finally he gets let in, but not by Jenny. Jenny breaks in on Brian’s confessional and she tells him that he just “lit the flames of hell.” Jamie has some hidden motives and tries to help Hailey hook up with a guy she thinks is cute.

The next night the gang is t a club. Jamie is very excited about hooking Hailey up with someone else so she can finally feel some peace with Thomas. She has been very insecure. As soon as she heads back to Thomas with a BIG grin on her face, he bursts her bubble by telling her he is NOT happy that she set up his ex with another guy and that he doesn’t like seeing her there with another man. Jamie looks devastated, knowing he cannot be over Hailey if he is still feeling this way.

The guy Hailey was talking to begins talking to Jenny after she is dancing nearby. Meanwhile, Jamie is fighting with Thomas about being upset over Hailey being there and Hailey overhears. Thomas is drunk and yells at her to leave. It is very obvious that despite his telling her to go, he is still very in love with her and cannot stand to be around her because he cannot move forward with Jamie.

Back at the house, Jamie is once again getting in people’s business and tells Brian he needs to go talk to Jenny. This, just moments after Jenny was being a complete child, and putting Brian through even more torture. Cory even tells Jenny how childish she is acting. A few moments later Jay and Jenna are happily talking to Cory about how great their relationship is and how they never fight. Once again, instigator Jamie makes a sound like she is choking upon hearing the conversation. Jay then asks her what was going on and she promptly walks over to the three of them. Jamie starts putting her two cents in about their relationship and tells Jay that Jenna is unhappy. Jamie tells Jenna to tell Jay what she told her earlier and puts her on the spot. When Jenna doesn’t feel like sharing her personal feelings with everyone, Jamie takes it upon herself to tell Jay for her!! After she gets everyone upset, she tries to explain herself to Cory.

Meanwhile, Cory, Brian and Jenny are in the kitchen and Jenny is still bitching about everything that supposedly “doesn’t” bother her. She does her usual act and pushes and pushes and says the things that trigger action from others and Brian tells her to go to bed and calls her a b*@%#. She uses that as a good excuse to slap him hard across the face. Not once, but twice. She then kicks him. Finally security comes in.

Jamie made things really bad between Jay and Jenna by getting in their business and not they are fighting as well. Jay is upset that Jenna shared their personal business with Jamie and didn’t tell him how she felt. Come on, Jay..you knew how she felt, BUT in Jay’s defense, Jamie had no business e=getting in another couple’s business.

Jenny and Brian continue to argue until producers calm Jenny down and set a plan for her to go to bed and leave the situation. Brian is finally feeling ready to move on. Jenny starts throwing all of Brian’s clothes out of the room because she says she just wants him out. Somehow I have a feeling it is not over between these two yet.

Did you like tonight’s episode CDLers? Was Jamie right for speaking for Jenna? Are you Team Brian or Team Jenny? Tell us what you think below!