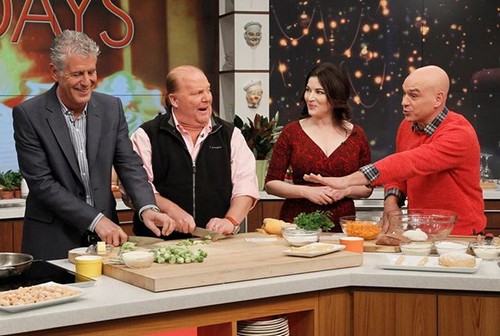 On ABC tonight The Taste returns with another new Thursday, December 11 season 3 episode 2 called “Under the Sea,” and we have your weekly recap below. On tonight’s episode, contestants prepare dishes from the sea, including steamed fish, seafood stew and shellfish in miso broth.

On last week’s episode, i n the two-hour series premiere, home cooks and professional chefs from across the country battled it out in “The Taste” kitchen by creating their most delicious dishes for culinary superstars Anthony Bourdain, Nigella Lawson, Ludo Lefebvre and Marcus Samuelsson to taste. Every dish was always judged blind. At the end of the night, 16 cooks were given a place on their mentors’ teams. Did you watch the last episode? If you missed it we have a full and detailed recap, right here for you.

On tonight’s episode as per the ABC synopsis, “Seafood takes center stage next week when the 15 remaining hopefuls face off in “The Taste” kitchen and put their personal spin on the mentors’ favorite seafood dishes. With a menu featuring steamed fish, seafood stew and shellfish in miso broth, in the end, two more competitors will eliminated.”

Don’t forget to join us for our live recap tonight at 8:00pm when The Taste Season 3 episode 2 returns to ABC. While you wait for the recap, let us know what you think of The Taste?

We get a recap showing us all of the chefs who made it on a team and the first challenge they had to do. Now the teams are doing a team challenge based on under the sea.

Next up the teams have to make a seafood or fish dish, the winning team gets a master class and help in their next round; though the losing team must choose a member to go home. Marcus shows his team exactly how he wants them to make their dish, making sure they get an idea though they can make it their own. Anthony now gives his team an example of fish stew for them. Ludo makes some boiled fish and broth with his team, showing them how they should present it and serve it. Nagella is helping her team figure out how to make their own little clam chowder. The teams are now kicking it off with their own creations now.

The mentors are walking around their chefs and making sure they are really confident and have a clear thought on what they want to make. Marcus wanted his team to do shellfish and fish in the same dish, it might be much; but he really wants his team to be in a challenge. Ludo is trying everyone’s dishes, making sure to find the best dish. Anthony decides that Eric was his winner, Marcus takes Gabe’s spoon, Ludo decides he wants Natasha’s dish and last of Nigella wants to go with P.K. First up is Eric’s spoon and found it to be pretty good but slightly under salted, next up is Gabe’s dish that was very good, next is P.K. and one of the clams were sandy and it wasn’t pleasant; Last up is Natasha and the sauce has good flavor though can’t identify the fish. The best dish was team Marcus and the second best was Anthony; the losing dish tonight is team Nigella again. The sandy texture in the clam was the biggest let down, Nigella decides that right now who she is going to send home on her team; she believes that Lindsey will go home. She was very difficult to mentor questioning her mentorship more than herself, it wasn’t right and very rude.

Now team Marcus is getting a cooking course about fish, learning what they should do and can even ask what they want to cook is smart; they all get their questions answered and are feeling pretty confident with going to the next solo round. Once again each chef has an hour to cook a dish based on their theme under the sea again. All the chefs are rushing their ideas and are starting off what they’d like to make, Marcus is not confident with his chef Jake; feeling he isn’t completely ready for this.

The chefs are working really hard and fast, they are focusing on themselves; they know it’s really important to show off their skills. This is where the separate the chefs from the cooks.The time is up and each chef is not very confident; they are not sure if what they did is good enough. Some people are not even finished yet.

The chef’s are now trying all the dishes finding out which two will be in the bottom, though some chefs are getting upset that their dishes they thought were delicious are turning out to be the exact opposite.

The mentors are continuing their food, they are feeling that the dishes are lacking quite a bit; the mentors are also disagreeing a lot with each other and what they feel about each dish. Everyone is very worried, many dishes slipped so anyone can be in the bottom tonight.

The best dishes from tonight are for Natasha, Joe, Natasha and Gabe. Now with tonights best dishes they get a better look, at them; Natasha now explains her own dish to the mentors. Nigella and Anthony chose her dish, they were so impressed with all their dishes. Marcus asks Joe how he mad his dish, Joe explains that this was a dish he only heard of and never made it himself. Ludo asks Gabe what was in his sauce, he explains it was all inspired from the master class; Ludo loved it all a lot. Anthony’s least favorite dish was made by Jake, Macus’ favorite dish was made by Mia, Nigella’s least favorite dish is Jen’s and then Ludo’s least favorite was cooked by Natasha.

Anthony asks Jake about his dish, he explains it and Anthony felt it was just not good at all; he doesn’t think he pulled it off. Marcus tells Mia her that it was just too much going on, she had to simplify it more. Nigella says to Jen that it was dull and lacked flavor. Ludo says that her dish was over cooked a bit, but his spoon did fall over. The mentors are arguing and fighting amongst each other but come down to the two they want in the taste off.

Going to the taste off tonight is Jake and Jen to show they have what it takes to stay in the competition, they have 40 minutes to create a dish wit halibut; they also get their mentors to help them as well. Their mentors are telling them exactly what they must do for their dishes, though they are getting a bit confused at times; Ludo is shouting now because he’s getting frustrated. The chefs are under tons of pressure, Jen is getting stressed with Ludo’s shouting.

The other mentors comes out and now will be trying their dishes, Jake’s was missing a little something in it and the halibut is a bit over cooked. Jen’s dish was also over cooked and missing a bit salt; the cook going home tonight is Jake.