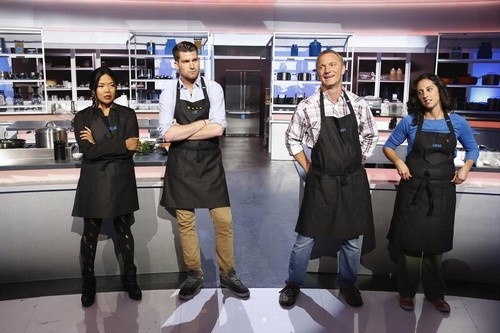 On ABC tonight THE TASTE returns another new episode called, “Go Green.”  On tonight’s show in a shocking turn of events, one contestant mysteriously disappears from the kitchen.  Did you watch last week’s premiere episode?  We did and we recapped it for you right here for you.

On last week’s episode the mentors were challenging their teams with creating delicious dishes inspired by classic “street food.” Sandwiches, seafood – and, of course, the classic English delicacy of fish & chips – were on the menu last week as 12 remaining competitors battled it out for the chance to stay in “The Taste” kitchen another week.

On tonight’s episode the heat in the kitchen is definitely on as the remaining nine competitors continue to fight to stay in “The Taste” kitchen one more week. But in a shocking and unexpected turn of events, one cook decides to mysteriously leave the competition, leaving everyone wondering what happened.

Don’t forget to join us for our live recap tonight at 8:00pm when The Taste Season Two episode 45 returns to ABC. While you wait for the recap, let us know what you think of The Taste?

RECAP: Nigella and the three other mentors are having a meat feast, Tony says that today is going to be a vegetarian challenge; Ludo is happy to have this challenge because he’s sick of cooking with fat for so long. The mentors tell their teams that this week is going to be a vegetarian challenge, the mentors do not want to lose this challenge especially Ludo. Nigella talks to Jacquelyn that she needs to work hard, it’s only her left on the team and she needs to pull through. There are ten contestants left, Tony says that tonight is the most difficult challenge yet; he goes through the rules of the challenge and introduces the guest judge Yotam Ottloneghi, a man who cooked a vegetarian meal for Tony without him knowing there was no meat in it. Tony says for his team to cook a vegetable pasta dish, Marcus shows them how to cook a cauliflower, rice and vegetable dish. Nigella has decided that Jacquelyn should try to make some form of curried vegetables, Nigella then continues to show Jacquelyn how to make a dish with curried vegetables. Ludo tells his team to not hide their vegetables, he wants them to make a very tasty dish with the vegetables as the star. The challenge begins, the cooks now have an hour to cook a vegetarian dish. Shehu is going to make a samosa, Sarah is going to make a grilled radish with quinoa. Jacquelyn says she’s pretty vegetarian, but eats meat, kind of confusing. Jacquelyn wants to try and prove to her son that she can do this competition, Jacquelyn has had a bad start, and she looks a little intimidated. Nigella is getting frustrated because of how Jacquelyn’s cooking, for someone who’s trained she doesn’t look like it.

Jeff is going to make a garbanzo smash, he talks about how he’s used to cooking vegetarian foods. Marina is going to be making a legume medley, Louis is making some glazed carrots. Dana is making an angel hair pasta, Lee is going to be making angel hair pasta as well with a mushroom ragu though. Ludo comes up and tells Lee to win for Cassandra, he’s representing her for the vegetarian. Shellie is making a pasta with asparagus. Nigela is worried about Jacquelyn because of how she doesn’t taste her food often, Nigella looks like she’s having a hard time trying to help Jacquelyn. Louise really likes having Ludo’s help, it’s making her learn a lot more. Tony comes over to talk what if he wins over Ludo, Ludo doesn’t want to lose against Tony. Tony likes spicy food a lot, but Lee’s dish is a little too spicy, he finds that Lee doesn’t push himself much in the team challenge, but goes all out on the individual challenge. Lee is pissed off that his dish wasn’t chosen again. Shehue and Sarah taste each-others dish, to see whose will represent their team. Sarah’s dish is chosen, because of how well she knows what the guest judge likes. Ludo decides to finally choose Louise spoon to go up for tasting. Nigella and Jacquelyn are arguing and seem much unorganized, Jacquelyn doesn’t seem to know what she’s doing in the kitchen.

Jacquelyn makes it at the last second, Nigella says that she’s worried about the outcome of this challenge. Ludo says he doesn’t want to make a mistake like he made last week, this time he wants to win. Yotam comes out to taste the chosen dishes, he tastes Sarah’s dish and he loves the crunch of the vegetables. Yotam tastes Shellie’s dish, he likes the small fried crunch and loves it. Yotam now tastes Louise’s dish, he seems to be impressed with it. Now he tastes Jacquelyn’s dish, and it seems that he likes it. Right before Yotam was going to announce his favorite dish, Jacquelyn walked out of the kitchen and left.

Nigella has no idea where she’s gone, Tony then says to Yotam that someone is missing. Nigella tells Yotam to continue, he’s going to review his best dish and he’s chosen Ludo’s kitchen. Tony doesn’t look happy at all. The second best for Yotam was Nigella’s kitchen, but Jacquelyn is gone. It seems that Marcus’s kitchen is in the bottom, now it’s down to Sarah and Shehu to go home. Marcus must now decide for one of them to go home, he asks why he should let either of them stay. A person comes out and tells the mentors something in private, whispering to them. Tony now announces that Jacquelyn has withdrawn from the competition. Now Marcus doesn’t have to get rid of either Shehu or Sarah, he’s happy to have such luck. It’s very weird, Tony apologizes for that awkward moment. Now Ludo’s team will be given a private class with Yotam. Nigella sits down with Ludo and Tony, they don’t understand why Jacquelyn decided to leave. Nigella says that it wasn’t a great way to leave the competition, Ludo says it was because she wasn’t confident or believed in herself. Ludo then tells Nigella that her team was filled with crazy people. Marcus tells his team that they’ve dodged a bullet this time. Tony’s team is talking amongst each other about how Jacquelyn left the competition. Yotam is now going to be teaching Ludo’s team about cooking, he’s going to teach them how to make a baba ganoush. Ludo’s team tastes his dish and they seem to really like it, Jeff said he was confused with this challenge at first, but now he thinks he’s got the hand of it. Jeff feels that he’s got a huge advantage with Yotam being with him. The contestants now must prepare for they’ve got a minute before the challenge begins.

Now the contestants are cooking their individual dishes, that’ll be judged blind by the mentors. Nigella says to Ludo his team has got a good advantage having Yotam on their team. Marina is making grilled eggplant. Louise is going to be making a roasted beet salad. Jeff is going to be making braised carrots and turnips. Tony feels like he’s doomed in this challenge. Shellie is making a deep fried asparagus burrata. Lee is making a saag paneer, Brad is making a vegetable ratatouille. Dana is making a spaghetti squash salad. Sarah is making a beet salad, Shehu is going to be making gnocchi. Tony tells Ludo that Marina is his wild card and wouldn’t be surprised if she wins the whole thing. The mentors talk about what if Lee and Jeff end up in the bottom, they don’t want to see that outcome happen. The contestants have to pick up the pace, there’s only 20 minutes left. Sarah forgot something in the oven and now it’s burnt, she’s not feeling confident now. She doesn’t want to fail this challenge, she’s going to have to start over though in order to serve something perfect. Yotam wants Jeff to add some more crunch. Lee is behind on cooking his spinach. Now its two minutes left because the contestants need to hurry and start plating their spoons for tasting. Time is up and now their dishes will have to go and get tasted by the mentors. The mentors are now going to be tasting Dana’s dish first, they seem to like it a lot especially the flavour, it was missing a crunch. Sarah’s dish is up now, and they seem to like it, they think corn was in the dish, but there was none. Brad’s dish is now up, Nigella didn’t like the eggplant much and Marcus agrees it’s a bit oily, but everything else about it was fine. Ludo on the other hand didn’t like it. Shehu’s dish is now up, Nigella doesn’t seem to like it, Ludo liked it, but there wasn’t a mushroom.

Tony’s worse dish was cooked tonight by Dana, Marcus’s worst dish of the night was cooked by Jeff. Nigella’s worst dish of the night was cooked by Dana, and Ludo’s worst dish of the night was cooked by Jeff. Ludo is pissed off that he chose Jeff’s dish, someone on his team. Dana explains what her dish was, Tony said the squash spaghetti was far too noodle like. Marcus liked the pesto that was put on it and the eggplant, but it didn’t come together. Jeff now explains what he made, Ludo says that the technique was amazing, but he didn’t taste all the flavours that Jeff explained. Dana and Jeff now have two red stars each, they both now have to explain why they want to stay in the competition, Dana didn’t even try to fight and defend herself. Jeff says that he’s talented and wants to win this competition. Now the mentors now must make a decision for who’ll be voted out of the competition. Jeff feels very crappy having to wear two red stars now, he feels like he was defeated today. Louise is very happy to earn two gold stars, Lee is happy that he was able to get a gold star in the vegetarian challenge. Now they have no option, they’ll need to send home a good chef home at this point in the competition. Jeff hates being in the bottom, he wants to win and doesn’t like it. The judges will now decide on who’s leaving and staying in the competition. The judges have decided that Dana will be going home tonight, Jeff is happy that he’s not going home tonight, because he now has time to improve and win this competition.