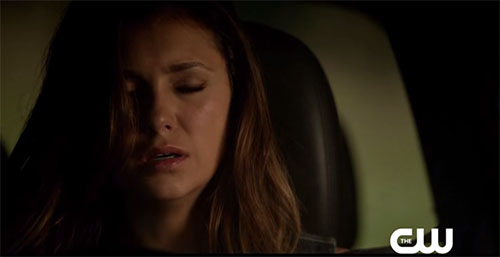 The Vampire Diaries released a new teaser trailer for its upcoming season and, well, let’s just say Elena is having some trouble coping with the loss of Damon and Bonnie. The loss of Damon was a surprise, and people were getting all stressed out by the idea of Ian Somerhalder not appearing in future episodes. Fans of the show can rest easy knowing that Damon will be appearing in an least a handful of scenes; however, at least at the moment, he’s still very, very, very dead.

While the witches of the world might find a way to resurrect Bonnie and Damon at some point in time via an incredibly obscure and universe-breaking spell, we might have to wait a while for that. Elena is obviously not handling his death well and, as we see in the newly released trailer, she appears to be resorting to some form of supernatural drug/potion that allows her to have visions of her deceased boyfriend.

Her mourning isn’t pretty and could potentially be downright dangerous for her overall well being as the season develops. If the “drug” she’s employing is in any way linked to magic, which the trailer clearly asserts, then there’s a great chance there’ll be a price to pay. We hope Elena’s friends don’t let her get too far down the rabbit hole before knocking some sense into her.

Caroline will undoubtedly get an intervention going at some point — but will she be too late? I guess we’ll just have to watch this upcoming season to find out what happens with this storyline!

Take a look at the new trailer below and let us know what you think. Are you excited for TVD season 6? The Vampire Diaries season 6 premieres on Oct. 2 at 8/7c.