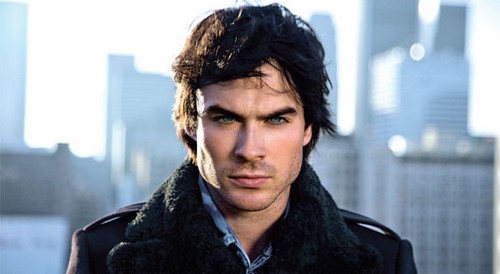 So much for staying dead and leaving The Vampire Diaries to concentrate on his movie career, huh? Ian Somerhalder‘s Damon Salvatore seemed to bite the bullet at the end of the fifth season, but Ian uploaded an Instagram photo teasing Damon’s return in Season 6.

He uploaded a picture of Damon wearing fangs and blood, with the caption, “He’s back! #DamonSalvatore.” This should serve as a confirmation that we will see Damon in the fifth season, although that leaves a lot more questions than answers. Obviously, we won’t really know what happened to him and Bonnie until the show starts airing, but I think this proves that Ian is back in the sixth season as a permanent cast member. In that scenario, I really, really want to know how the show’s producers will manage all the on-set cast awkwardness, especially between Ian and Nina Dobrev.

Ian’s now dating Nikki Reed, so is he going to bring her to set with him? Is the PDA going to make Nina feel awkward? And what will Ian and/or Nina do when their contract for the show is up, which is reportedly at the end of the sixth season?

That also brings to question what Ian was planning to do with this film career. Was his return on the show always planned? It’s possible that the showrunners didn’t want to risk losing viewers, since Damon is without a doubt one of the most popular characters on the show. But we’d also been hearing that Ian really wanted to concentrate on his movie career, which was one of the reasons his character was ‘killed off’. Maybe he changed his mind when he realized how difficult it is to launch yourself as a movie star in your 30s, and it’s much easier relying on a steady paycheck from a successful TV show. Either way, Damon’s back! Rejoice, TVD fans!