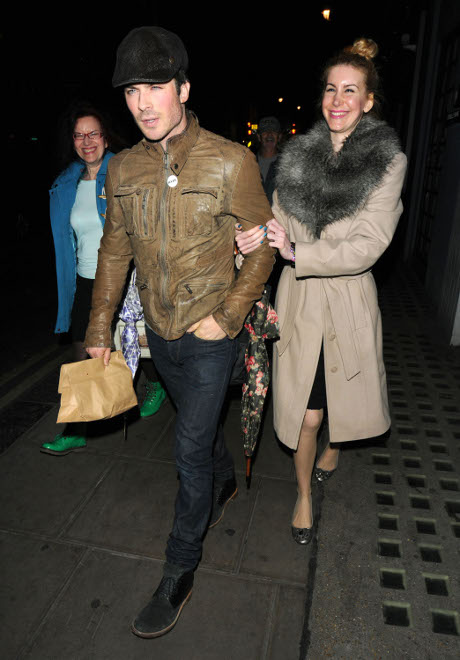 How are Nina Dobrev and Ian Somerhalder handling their breakup? According to sources, not very well. Ian seems to be attempting to hook up with random floozies, whereas Nina is apparently still incredibly upset. According to several reports, Nina and Ian were professional when they met for the first time since their breakup during the CW upfronts in NYC. However, as soon as they parted ways, Nina supposedly started crying. Friends close to the Vampire Diaries star say that she is still devastated.

However, other sources are saying that Nina and Ian still remain ‘best friends’, and will continue to remain that way after they return to film ‘The Vampire Diaries’ in Atlanta. Hm… why don’t I believe that?

I think the initial reports had it right. Ian has been spotted out and about, and he seems to be getting over this breakup by partying and hooking up with random women. Nina, on the other hand, has barely been spotted out, but she was seen relaxing with her gal pals quite often before the breakup was officially announced.

So either both Nina and Ian  broke up a while ago and have moved on, or Ian just doesn’t care. Or maybe he cares, but he was dumped so this is his way of getting revenge. Who knows what’s actually going on? There are plenty of theories floating around right now, and the most popular one seems to be that he cheated on her. If that’s the case, I don’t see how they will continue to work together, especially if they have to shoot romantic scenes.

When Chad Michael Murray cheated on Sophia Bush during One Tree Hill, it was rumored that she actually requested the showrunner to change her character’s arc to make sure she didn’t have to do any more love scenes with Chad. FYI, One Tree Hill was another CW show – what is with all these CW shows and their stars constantly hooking up with each other and breaking up?

So will that happen with Nina and Ian? Right now, they’ve already managed to make one public appearance, although they barely interacted through that time. What will happen when they have to be in close proximity to each other constantly? Let us know what you think in the comments.