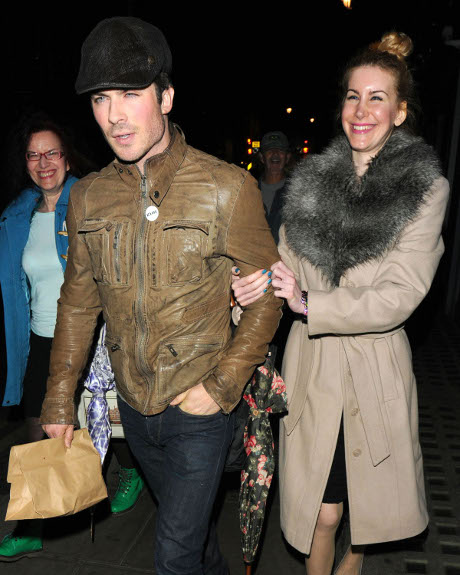 Well, Nina Dobrev wanted everyone to know that she and Ian Somerhalder split up, right? Well now it seems as if Ian’s trying to send a loud and clear message. If you’ve kept up with the saga of The Vampire Diaries off-screen love affair then you know that after three years of dating Ian pulled the plug shortly after the Oscars earlier this year, but opted to keep quiet about it. Nina had hoped it was a temporary situation and also kept the situation as hush hush as she could manage, although she did give us some clues along the way that things weren’t great between them.

Finally, Nina got tired of living a lie and allowed her friends to leak the split to the press. Ian came out of it all looking like a bit of a douche bag for likely cheating on Nina and then wanting her to carry on as if nothing had happened. When the friends spoke out it left TVD’s producers to have to scramble to do damage control so that the characters weren’t affected by the former couples’ personal situation.

It also left Ian having to figure out how to proceed next. Up until now he had been a really good boy and spent months tweeting about charity stuff rather than partying with chicks but last night that all changed. I guess he decided to send a loud and clear message that he is indeed a single man, as he was spotted leaving a club with some random hot chick by his side (for more photos CLICK HERE). I’m pretty sure that it’s a bitter pill for Nina to have to swallow, even though her friends actually facilitated Ian being able to move on publicly.

It always sucks to see that your ex has moved on before you. Nina can’t be thrilled about this. She may have wanted the world to know the truth, but I’m sure she didn’t want to see photos of Ian with another woman a few days later! Will Nina also turn up with a new man to prove that she too can move on? Or is this going to stun her and cause a rush of unresolved hurt to flare up again? Tell us your thoughts in the comments below!