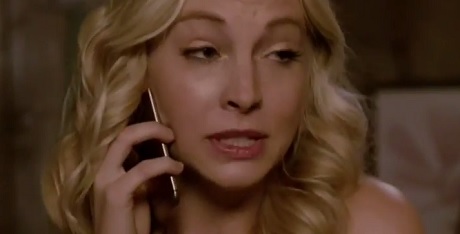 Did you watch the most recent episode of The Vampire Diaries? We did, and we recapped it for you right here. If you’re opposed to spoilers and haven’t yet devoured the season 6 premiere episode, then definitely take a few moments to read the highlights or take SO MANY MOMENTS to watch the episode for yourself.

During episode one, we saw Elena coping with the loss of Damon, her vampire lover who didn’t make it back across from the Other Side, and choose to return to Whitmore College — because it’s VERY important she get a university education during all the chaos in her adorable little life. Caroline (Candice Accola) was desperate to find a way to reverse the anti-magic spell the Travelers put over Mystic Falls and grew frustrated when her calls to Stefan (Paul Wesley) went unanswered.

Tyler (Michael Trevino), who is human once again, had a run-in at a football tailgate, which tested his ability to control his anger. Our poor ol’ favorite Mystic Falls human, Matt (Zach Roerig), worried for his best friend, Jeremy. He was particularly worried that he’s choosing to deal with the loss of Bonnie, his former flame and lover, in a self-destructive way.

What did you think of tonight’s episode? On next week’s episode, according to the official CW press release…The Vampire Diaries season 6 episode 2 “Yellow Ledbetter”: “Knowing she needs to come to terms with the loss of Damon (Ian Somerhalder), Elena (Nina Dobrev) is going to turn to Alaric (Matt Davis) to help her move on with her life. Enzo (Michael Malarkey) is going to convince Caroline (Candice Accola) to join him as he tracks down a lead to get Damon and Bonnie (Kat Graham) back, but Caroline will be shocked when they make an unexpected detour and uncover what Stefan (Paul Wesley) has been up to.”

It also seems as if Matt will continue to worry about Jeremy, who’s chosen to spend time with a mysterious new Mystic Falls arrival, who goes by the name of Sarah. Hmmm, what’s her story — and what’s she got cookin? Make sure to tune in for next week’s episode, and don’t forget to check out the official promo trailer below. Make sure to check CDL for all your current TVD spoilers!