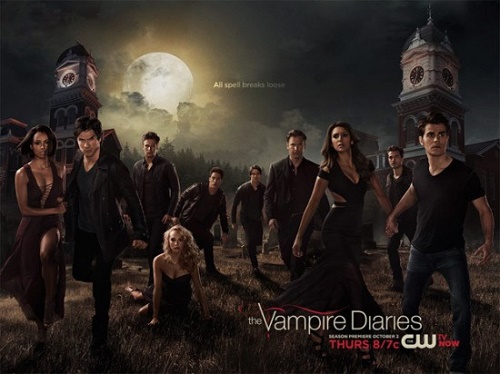 Season 6 of The Vampire Diaries is all set to premiere October 2, and the fans have been working themselves into a tizzy with anticipation. Fortunately, we have some juicy tidbits for you guys regarding spoilers for Season 6 and not just the premiere! According to our sources, the entire Season 6 will be a roller coaster ride, from start to finish.

For one thing, the promotional poster already hinted that Elena Gilbert [Nina Dobrev] and Stefan Salvatore [Paul Wesley] will be back together [they are holding hands], but our sources now add that Elena and Stefan will be the show’s endgame – in other words, they’re the ones who will end up together by the end of the season, especially if the show wraps up and/or the actors leave after their contracts finish.

While that’s bad news for Caroline Forbes [Candice Accola], there could be worse news for her around the corner. Although Caroline and Stefan shared an intimate and budding romantic connection last season, our sources say that Stefan’s heart has always been with Elena – even as she’s gone gallivanting around with his brother, Damon Salvatore [Ian Somerhalder].

Unfortunately, we’re also hearing that there’s a chance that Caroline could be saying a permanent good-bye before this season wraps up, although we’re hoping that she somehow escapes death. But everyone we’re speaking to says to expect a major character death in season 6, and Caroline’s death makes the most sense, from a plot-driven standpoint.

Of course, Stefan’s also going to be at a big loss with the fact that his brother is no longer by his side, and he’s going to go through a lot of chances over season 6. Don’t expect to see the Stefan that you know and love during the season 6 premiere, and in fact, many of our main characters will be worse for wear after the events of last season. But this being TVD, there’s bound to be many twists and turns over the season.