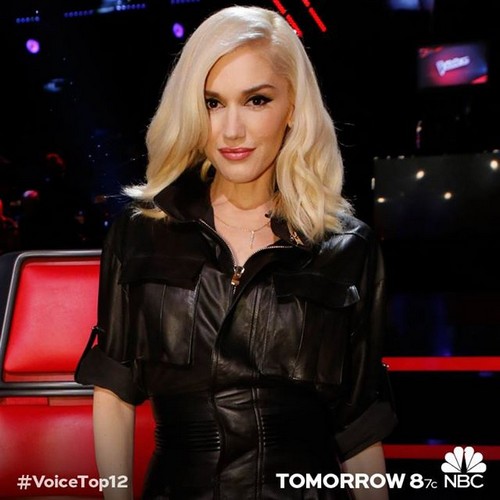 On the last episode, results were in and the top 20 artists awaited America’s vote. The top two performers from each team moved through to the live shows and the coaches, Adam Levine, Blake Shelton, Gwen Stefani and PharrellWilliams saved one remaining artist from their team. Did you watch the last episode? If you missed it, we have a full and detailed recap right here for you.

Tonight’s season 7 episode 18 is going to be exciting. We’ll be blogging it right here for you. In the meantime hit up the comments section and tell us your thoughts on season 7 of The Voice and the two new judges, Pharrell Williams and Gwen Stefani.

We are now down to the top 12 and kicking off the show tonight is team Pharrell with Sugar Joans, he saved her because he knows she is going to be amazing and needs to be here. Pharrell gave her the song “Take Me To The River” by Talking Head. Sugar loves performing with her brother a lot; he’s going to be in the audience and really wants to make him proud.

Gwen says she has been thinking of her all week, she felt Sugar’s last performance was perfect; loving her old fashion sound and is really wondering what she’d make as a record. Adam says this was cool having to see her do a little less in the beginning, since she’s always so powerful; the dynamics really showed a lot more of her skills. Blake says that he always looks forward to her, she has an edgy voice and it’s crazy how she always take it to another level. Pharrell says that he is so proud of her, she keeps coming out and showing new terrain; he thanks her for following through on every song.

Next up is Ryan Sill from team Gwen; Gwen is going to give him “Ordinary World” by Ryan Sill. Gwen loves how natural he sings, though he has to really bring out the emotion because while performing he’s really focusing too much. She knows he has the star quality in him and he has to just let it out.

Adam says that he did such an amazing song and is so happy that he is such an amazing singer; his big notes were crazy and he has to do more rock and roll songs. Pharrell says that he didn’t know he can sing so well, he has the talent for sure and agrees with Adam and that he must go for rock music. Gwen says when she heard the audio of him singing she listened to it like 15 times, she is glad with how perfect it was.

Next up is Jessie Pitts from team Blake, she feels amazing to be saved by him and will prove to him he made the right choice. Jessie is going to sing “Don’t You Worry Child” and will do it in a completely different way; this song for her relates to her journey. She is going to bring an emotional take to the song, she believes Blake is the perfect coach for her and knows she can do this.

Gwen says that was so good, she really liked the whole piano playing and hearing it broken down was so beautiful; she thinks there is nothing she can do wrong. Adam says that her really liked that a lot, though the one thing he’d say is to keep exploring the big part of her voice and will help her stand alone. Blake says that he can’t say enough about Jessie, this is a person and artist who works so hard; maybe harder than anyone he’s ever met and is so proud of her tonight.

Next up is team Adam with Damien, last week he had a major moment and Adam was proud of him. Adam gave him the song “He Ain’t Heavy, He’s My Brother” by The Hollies. Adam knows he can do this hard song, he wants him to hit those high notes and show off his vocal powers tonight. Damien decided to listen to  this song all day and night to learn it completely.

Blake says that this room was enough proof of how well he did, the audience went crazy and loved the song choice. Pharrell says that last run and the whole performance was just genius, it was absolutely perfect and loved it. Adam says that he could tell he was questioning the song, but loved the fact that he took the song and blew everyone away; he is so proud of him and his performance.

Next up is Danica Shirey from team Pharrell, she always loved music and wanted to go back to it in her life. Her song is “Creep” by Radio Head, she wanted to take the song and make it her own. Pharrell is really interested with her choice and tries to make the band play it differently to sound better with her.

Gwen says that she loves watching her, she is just so incredible and she looks really young; watching her sing is just shocking. Adam says that she is so good and anything she sings would be amazing; making her song choices so hard. Pharrell says  he was amazed at how she wanted to do another song and performed it so perfectly.

Next up is Taylor John William from team Gwen, she is happy America chose him and decided he should sing “If” by Bread, not many people know this song but she feels amazed that he wants to do this song. Taylor is happy to be on team Gwen, she really helps him and makes him feel more confident.

Adam says he has such a beautiful voice and the song was perfect. Blake says that no matter what he ends up doing he’ll just keep that dark thing he does, yet it is very powerful and unique. Pharrel says it was a beautiful song, showing how tender and powerful his voice is. Gwen says it was beautiful, it made realize what his voice truly is; she felt it was the perfect song.

Next up is Reagan James and it was her birthday today, so Blake sang her happy birthday and had a cake for her. He gave her the song “It Ain’t Over Till It’s Over” by Lenny Kravitz, Blake is loving how she’s taking the song he gave her and totally making it her own.

Pharrell says it’s always cool to see someone come up with their own vibe and hold on to it,  he really likes how much of an artist she is. Adam says he loves that song and loved how different it was. Blake says he loved her performance and the way she flows with a melody blows his mind; she is so far ahead of her time.

Next up is team Pharrell with Luke Wade, he is really happy to have moved on and his family has been supporting him so much. Since being on The Voice so much has changed, he is singing “Thinking Out Loud” by Ed Sheeran. Pharrell needs him to get up and work the stage this time around, to show how dynamic his voice can be at the same time.

Adam really liked how he recovered like a professional, he slipped up but kept going anyways. Gwen says its happened to all of them, it only shows your human and he recovered very well. Pharrell says he agrees with them, he made his mistake but didn’t panic and kept going.

Next up is team Adam with Matt McAndrew, Adam gave him “Take Me To Church” by Hozier, Matt feels comfortable with him; as if they’re cut from the same cloth. Adam feels this song is going to be bigger than last weeks, he wants him to explode and show off his true potential.

Blake says that the audience is going nuts, he couldn’t hear him so good because the crowd was so loud. Pharrell says he can’t wait to hear the album he makes after the show. Gwen says it was the perfect song for him, he really showed off what he might be like if he made his own record. Adam say that he was going crazy because he couldn’t hear him so well and hoping they’d turn up his vocals; his Amen run was by far one of the coolest things he’s ever heard.

Next up is Craig Wade Boyd from team Blake, Blake’s mother texted Blake saying how much she loved Craig. Blake gave him the song “You Look So Good In Love” by George Strait, it’s a country classic that Blake knows he can do justice.

Gwen says that she felt the lyrics were so relatable since he used to be on her team. Adam says this was the moment he needed, he is very proud of that performance from Craig. Pharrell loves having someone like him on the show, he can hear Blake’s influence in his singing but it was such a professional performance. Blake says he loved it and is proud that he completely nailed that song.

Next up is Chris Jamison, Adam pushed him through because he knows he can still have a big moment. Chris is doing “Jealous” by Nick Jonas, it’s the perfect vibe for him and knows this can be his moment. Adam says that he should convey the song as himself.

Pharrell says that was one hundred percent his best performance yet, the way he handled the falsetto was effortless. Gwen says it was amazing and the screaming from the audience was insane. Adam says that he is a talented singer and that he really impressed him tonight.

Next up is Anita Antoinette singing “Redemption Song” by Bob Marley, this song is message to humanity in her opinion and this song is exactly what she loves to listen to and wants to show more of herself in this song.

Adam says he is so proud of her, that song was one of the most important ever written. Blake says there is something so soothing and calming to her voice, every time he hears her he just feels so good. Gwen says it was amazing and is so happy to have had her sing this song tonight; it’s beautiful and true.