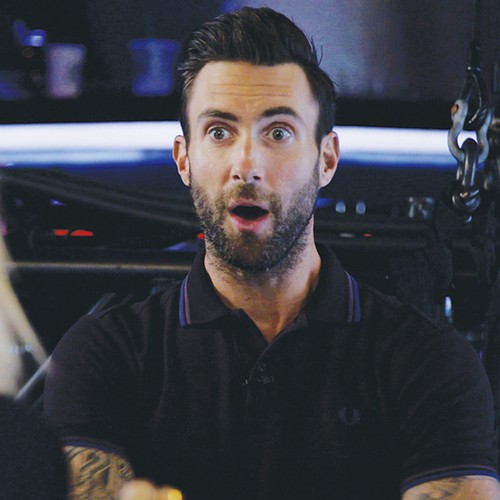 Tonight on NBC the Emmy award winning music competition The Voice continues with an all new Monday November 3, season 7 episode 13 called, “The Knockouts Part 3.” On tonight’s episode, the knockout round continues. Taylor Swift serves as an adviser.

On the last episode the knockout round continued and the top team members selected their own song to perform, Taylor Swift guest judged. Did you watch the last episode? If you missed it, we have a full and detailed recap right here for you.

On tonight’s episode the “knockout rounds” continue with coaches Adam Levine, Blake Shelton, Gwen Stefani and Pharrell Williams’ strongest team members remaining from the battle rounds. The artists will be paired against a teammate once more, but this time they will select their own songs to perform individually, while their direct competitor watches and waits. Superstar Taylor Swift will serve as a key adviser and be on hand to work with all of the coaches and their teams as they prepare the artists for this challenge. The coaches alone will choose the winner to move on to the live shows and the artist not selected will be available to be stolen by another coach. Each coach has one steal available during the Knockout Rounds.

Tonight’s season 7 episode 13 is going to be exciting. We’ll be blogging it right here for you. In the meantime hit up the comments section and tell us your thoughts on season 7 of The Voice and the two new judges, Pharrell Williams and Gwen Stefani.

The first pair up tonight is from team Allison Bray and Taylor Brashear, Blake feels these are his two country girls and knows they have to battle against each other. Allison is up first and she was so shocked to see Taylor Swift, but she is so excited to work with her. Allison is singing “Sin Wagon” and Taylor wants her to be very sloppy with it, to be a mess with it. Blake knows if she can listen to the advice from Taylor and fix her pitch she will do very well.

Taylor Brashear  is up next and she is singing “Landslide” by Fleetwood Mac, she wants to show Blake that she can sing in a nice soft voice as well as a loud powerful one; Taylor wants her to not go overboard with the song and to not look at the floor. She has to find a person and sing it to them, making eye contact is key to the performance.

Pharrell says they were both great and he’s always wanted Taylor on his team, but truly understood Allison tonight; he doesn’t know who he’d pick. Gwen says that Allison commanded the stage very well, though has to bring down the power notes a bit. Though she loved Taylors control and restraint, she would be her pick. Adam say s that Taylor did a song that made sense, though Allison blew him away with a song he didn’t know; he’d go with Allison. Blake says that Taylor does have amazing control and that authentic country sound; though Allison can project well and hit amazing notes. The winner of the battle is Taylor.

Next up is team Gwen with Ryan Sill and Beth Spangler, they both of a pop kind of sound and thinks they’ll do very well against each other. Ryan is singing “Miss Independent” by Neo, Gwen doesn’t feel like there is anyone like him, Taylor liked it a lot and loved it when he flashed a smile. Gwen wants him to have a bit more confidence and unleash the charisma with it, it’s his secret weapon. Beth has decided to go ahead and sing “Too Little Too Late” by JoJo, Gwen likes how she is so into the song yet over sings a little too much; she needs to calm it down a bit. She just needs to make it much more warm, it gives it a unique tone that will win the audience over.

Adam says he really liked Beth’s song choice and is an amazing singer, though Ryan has such an ease when he sings and has the rhythm nailed perfectly and believes he’d pick Ryan. Blake likes how he throws off his run easy, but Beth puts more power and says it’s pretty much a tie. Pharrell agrees, it’s a dead tie for him; he loved both performances. Gwen says when Ryan looked at her at the end of the performance it was very rewarding, she really liked seeing him evolve so much. Though believed Beth did everything right, though her notes are a little too much at times. Gwen decides the winner of the battle is Ryan.

Next up is Jean Kelly and Menlik Zergabachew from team Pharrell, he stole them both from Gwen and really wanted to put them up against each other. First up is Jean and seeing Taylor Swift was such a good surprise for her, she will be singing “Chandelier” by Sia and likes how sad the song is. Taylor knew from the first notes she heard that this song will be a game changer, she says it was such an amazing performance. Pharrell didn’t expect her to be this great when he stole her, Taylor says it was the most emotional performance she has seen; Pharrell says it was all really good and knows she can kill it.

Menlik is up next and he has decided he’s going to sing “Could You Be Loved” by Bob Marley, this is really comfortable for him and this is something he’s wanted to sing badly; though Pharrell wants him to opens his eyes when he sings. They need him to show off his feelings in his eyes, Taylor tells him he has to perform for everyone not just sing for himself.

Gwen says that Jean did such a haunting performance and enjoyed how she made it her own, it was very inense. Though also really loved Menlik and how much growth he’s shown, she didn’t even know he could do some of the things he did. Adam says that Jean has an interesting combination of anxiety and relief in her singing, she is very good yet Menlik has the same type of power. Blake says that Jean performed that song very dramatic, yet Menlik has amazing style and would pick him. Pharrell says it is so tough, he loved Jean’s dramatic performance yet thought Menlik’s performance was just as good. He is so lost at who to choose, he decides the winner of the battle is Jean. Menlik thanks Pharrell for the second chance and really liked having this experience.

Next up is team Adam’s pairing Blessing Offer and Chris Jamsion Blessing has decided he’s going to sing “Your Body is a Wonderland” by John Mayer, Adam really enjoyed his smooth singing and how natural he is at it. Taylor loves his presences and he truly puts his all in it, she believes he’s incredible. Adam says it isn’t something he’d recommend to do, yet really liked it.

Chris Jamison has decided that he’s going to sing “The Dock of the Bay” Otis Redding, Adam really likes his song choice and it’s something very different; though wants him to really nail the notes yet has to also control the stage more.

Blake says that Chris sang the crap out of the song, yet there were few mistakes here and there; Blake loves Blessing’s smile and knows there is something special about him. Pharrell says that Blessing had the crowd going, yet he was a bit pitchy yet they commend him on his performance; yet didn’t expect what he heard from Chris. Gwen says she almost didn’t recognize the song Blessing was singing, she loved how he made it his own; yet Chris did a song in such a modern way. Adam says that they are both incredible and Blessing could sing anything he wanted, yet Chris believes his song choice was good; it’s equally matched yet Adam believes the winner of the knock out is Chris. Blessing says he has learned a lot from Adam and Pharrell, he thanks them for everything.

Next up is team Blake with Grant Grazer and Reagen James, they are both very young and wants to see which of them are better than the other. First up is Grant and he was star struck from seeing Taylor Swift there, he is singing “Apologize” by One Republic; he really wants to show off his low register. Blake loves his big rich voice and can’t believe he chose this song, they want him to go into a darker place with this song.  Reagen decides she’s going to sing “Hit Them Up Style” by Blu Cantrell, Taylor is very impressed with how well she sings at her age; she can’t even believe how good her tone is. Blake is also impressed, she really performs it well.

Pharrell says that Grant had one point in the song he let out one note and knew that was him, though Reagan has such a powerful voice when she sings and would pick her. Gwen says that Grant had some sparkles here and there, though can’t believe how great Reagan is at her age. Adam likes that Grant is very normal and reminds of himself a lot, he was nervous for sure yet it was fine. Though Reagan freaks him out because she has the confidence in her ability. Blake knows the nerves got to Grant, yet he has two different voice because he’s not sure which to choose. Blake decides Reagan is the winner of the knock out.

The last roung is team Gwen’s Anita Antounette and Craig Wayne Boyd, first up is Anita is going to sing “Rude” by MAGIC!. Gwen wants her to really use her accent a lot more, she loves her character a lot more as well and she’ll kill it.

Adam says that Anita has come out of her shell completely and likes to see her arrive, though Craig says he sang that so well and made it his own. Blake says that Craig was so amazing tonight and really regrets not keeping him on his team, yet Anita also did such an amazing job as well. Pharrell says that Anita was amazing with her confident notes, yet Craig had the whole stage in his control. Gwen says she loves how Craig was on the mic stand, yet moved around the stage throughout the performance. She also loved Anita and he confidence on stage, deciding that Anita is the winner of the battle. Craig thanks Gwen for the chance to work with her and making him finally get a hair cut; Blake right away decides to steal him right back on his team.