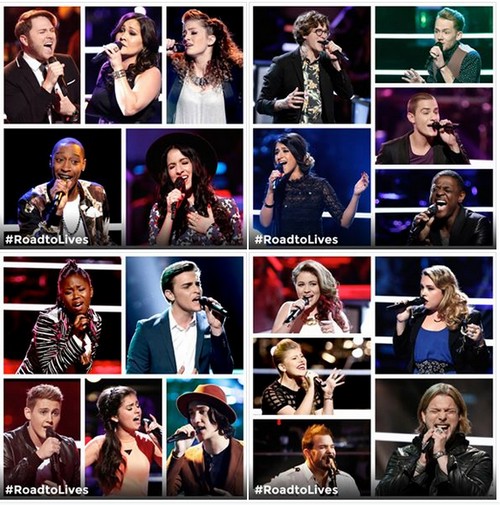 Tonight on NBC the Emmy award winning music competition The Voice continues with an all new Tuesday November 4 season 7 episode 13 called, “The Road to the Live Shows.” On tonight’s episode, a best-of look back at the journey of the Top 20 vocalists. Previously unseen footage of the coaches is also included.

On the last episode the knockout rounds continued and the top team member selected their own song to perform, Taylor Swift guest judged. Did you watch the last episode? If you missed it, we have a full and detailed recap right here for you.

On tonight’s episode re-live the best moments from the season so far during this original, jam-packed special about the journey of the top 20 from the blind auditions to next week’s live playoffs, as well as never-before-seen footage of the coaches Adam Levine, Blake Shelton, Gwen Stefani and Pharrell Williams.

Tonight’s season 7 episode 13 is going to be exciting. We’ll be blogging it right here for you. In the meantime hit up the comments section and tell us your thoughts on season 7 of The Voice and the two new judges, Pharrell Williams and Gwen Stefani.

WE take a look at all our artists moving on to the live shows, first is Danica and Pharrell could not be happier to have chosen her because she is so powerful and strong. She always brings out the emotions in her singing and you can feel it; she never disappointed him for a second.

Next we see Luke Wade, he lost his eye in a paint ball accident; he is someone Pharrel knew from the beginning that he’d be a perfect contender to become a winnner of the show.

Next we see Jean Kelly who found comfort in music after he mother died, she was first with Gwen but Pharrell stole her in the battles; though after her first performance on his team he knew she could win it all.

Sugar Joans is the next member of team Pharrell and she really impressed Pharrell with her powerful voice, he is so glad to have been able to steal her in the knock outs; she is an important member of his team now and loves the soul in her voice a lot.

Next is team Gwen, starting off with Taylor John Williams; he played music at a dog cafe and when Gwen first heard his voice she knew there was something special. She feels that he has such a special voice and knows he can go far.

Next is Anita Antoinette who got severe stage fright after failing in a previous season, Gwen really like her accent and style; feeling like she could bring out so much more. Her performance in the knock outs really blew Gwen away, she is so happy to have her with such confidence right now.

Next is Ryan Sills who went to college to be an engineer, yet figured that music was his true passion in life; he went ahead to pursue and landed himself a spot on team Gwen. Gwen really likes his style and stage presence now; she knows he’ll keep on evolving into a better artist.

Next is Bryana Salaz and Gwen felt a connection between the two of them, also impressing Gwen with her very powerful voice though in the knock outs she taught her to hold herself back sometimes to impress the audience even more.

Ricky Manning was on team Pharrell, but Gwen made sure to steal him in the knock outs having loved his rendition of Wrecking Ball; it truly blew her mind and knew that without a doubt that he had to be on her team.

Next up is team Blake, he believes his team is magical and first up is Taylor Brashear and caught Balke’s attention with her vintage sound; it’s something that many people don’t have anymore. She impressed him time after time proving to be a perfect fit on team Blake.

Next is James David Carter who gave one the best blind auditions Blake has ever heard, he then continued to impress Blake with his amazing country sound and Blake knows without a doubt he’ll be a threat to the others.

Next up is Craig Wayne Boyd who really caught Blake’s attention, even though Craig was let go and stolen by Gwen; he went right ahead and stole him back from Gwen in the knock outs after seeing his amazing improvement.

Next up is Reagan James who impressed all the coaches with how powerful and confident she is singing at such a young age, Blake was never disappointed with her in each performance and she completely dominated the knock outs and battles; keeping her place on Blake’s team.

Next is team Adam and first up is Damien who after a very horrifying experience in his life he realized he must pursue his love for music, he really impressed the coaches with his emotional performance in the blind auditions. He really proved his talent and ability to improve throughout the blinds and knock outs; earning his spot on team Adam.

Next is Chris Jamison who caught Adam’s attention in the blinds, especially with one powerful high note that he knew he could work with. IN the battles Chris followed Adam’s advice and in the knockouts his soul performance truly impressed him more than anything.

Next was Matt McAndrew who Adam knew without a doubt had something special, he knew he had to have him on his team and he never let him go; Adam knows he’s a star and wil surely be a huge threat to everyone in the competition.

Next is Mia Pfirrmann and her parents were musicians, she really liked coming out and starting her very first step in her music career; Mia kept impressing Adam through out the battles and knock outs having her keep a well deserved spot on team Adam.

Last up is Taylor Phelan who was on team Pharrel at first, but Adam went ahead and stole him in the knock out round; Adam really loved his performance and knew without a doubt Taylor had ot be on his team.