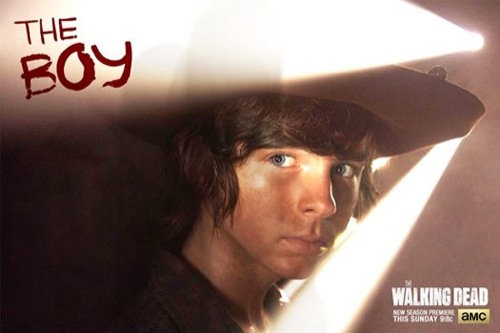 The Walking Dead returns on AMC tonight with all its gory goodness and an all new Wednesday October 8, Season 5 preview episode. Tonight, we will get a behind-the-scenes look at the upcoming fifth season.  Are you as excited as I am?  My favourite character is Carole, check out 5 things I would like to see happen to Carole this season and let me know if you agree with me?

On the last season 4 finale episode, Rick came face-to-face with sheer brutality when multiple paths collided. The finale was nothing that we expected and it left us wondering what would happen next with being a cliff hanger. Did you watch the last finale episode? We did and we recapped it right here for you.

On tonight’s episode, The Walking Dead will be having a special preview episode where they’ll be going in depth for what we should expect with the new upcoming season 5 of the show which will be premiering on Sunday.

You aren’t going to want to miss any of the unfolding action tonight. We’ll be recapping the preview episode live right here for you at 9pm. In the meantime, hit up the comments and tell us what you’re expecting from Season 5. Let us know how excited you are about the upcoming season premiere.

We are just a few days away from the premier of Season 5 of #WalkingDead and I am dying (pun intended) too see what goes down in Terminus. If you don’t want any spoilers – stop reading now – because we’ve got them. Here’s what we know heading into the new season.

#1 Terminus isn’t terminal
If you thought this season was going to be set at Terminus like the West Georgia penitentiary season, think again. Terminus is just a short stop for the gang. Last we saw our intrepid zombie survivors, most were in a train box that looked to be a holding cell before they became entrees for the good folks at Terminus. Who couldn’t guess that the meat they were grilling was Soylent Green (i.e. people) and that they were looking to nibble on Rick and crew? But it looks like the group will emerge unscathed (for the most part) from Terminus and the season will actually take place as a moving feast.

#2 No more side stories (except one)
One of the frustrations of season four was the damnably slow pace with the group splintered so that we didn’t have that great group vibe and it felt like the whole season only moved them three or four days forward and a mile or two down the road. Thankfully, this season, the gang’s all back together ready for a classic road trip. They convince Gareth, the head cannibal at Terminus, to come along on the trek to get Eugene to DC and cure this whole zombie apocalypse deal. In the sneak peeks at season five, we see Rick holding little ass kicker, with Tyrese, Rick, Darryl, Glenn and the others all there. So who’s left?

#3 Beth makes a come back
Beth has been missing for so long that you almost had to wonder if they just up and forgot about her. But she’s back with a vengeance this season. Beth is being held in what looks like a hospital staffed with uniformed quasi-Nurse Ratchet types that are rumored to be Atlanta police officers. At least she’s alive. We see her fighting back, making what looks like an escape attempt and getting whacked upside the head by an evil warden/nurse. Her story line is rumored to be beefed up this season so fingers crossed it will be awesome.

#4 Zombies, zombies and more zombies
A new zombie fighting tactic we haven’t seen will be implemented this season – firehosing the walkers! It’s like an undead slip and slide. Also, since the zombies have been shambling about now for a while, it’s inevitable they would have an evolution. Apparently the walkers are getting a serious case of rot and are starting to get slimier, losing body parts and looking more decomposed and icky. Yum!

#5 Time is not on our side
A new tactic will be implemented this season – time shifts. There will be a couple of different story lines and they may progress at different paces and the episodes themselves may not even be linear. I like stuff like this (Memento, anyone?) so I’m excited to see this and hope they can pull it off effectively. But in other exciting news, the pace of this season is supposed to be break neck leading up to the mid-season finale. Quite a contrast to the Downton Abbey pacing of last season.

#6 New characters
Last season brought us a few characters that will stick around for a while – Abraham Ford, Dr Eugene and Rosita. They are back for the new season and we’ll also get to keep some of the Terminus Termites including leader Gareth and maybe a few more. Also new this season will be Father Gabriel Stokes – a pastor who’s been hiding out in his church and who fed his congregation to the walkers to save his own skin (can I get an amen?). Sounds like Father Stokes is taking the sacrament offering a little too literally. There’s also buzz that we may see Negan this season – the leader of a vicious group called The Saviors.

And finally, violence, violence and more violence. This new season is supposed to be smashtastic and brutal. If you’ve got a queasy stomach, take your Pepto, bring a barf bag and buckle up for this bumpy ride.

Season 5 of the Walking Dead premieres Sunday October 12th at 9 on AMC. Join us here for a live recap of all the greatest gore!