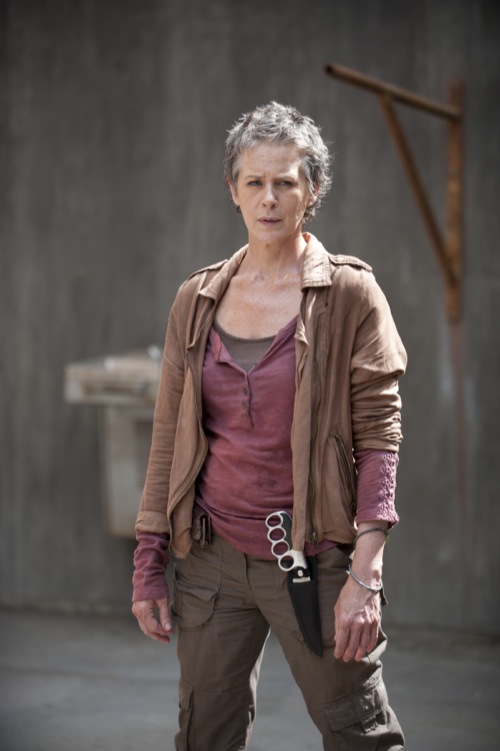 What are we hoping will happen to Carol in season five of The Walking Dead? At the end of season four, Carol was still traveling to Terminus with Tyrese and baby Judith. Season four was a very tough one for Carol, as she had to do some difficult things and make decisions none of us would want to make. Let’s see what we want season five to hold for her.

A Reunion with Daryl: Since Carol was ousted by Rick from the prison flock, haven’t we all been waiting to see her reunited with Daryl? Daryl returned to the prison to find Carol gone and I believe that before Rick’s explanation could sink in with our favorite redneck, all Hell broke loose thanks to the one-eyed Governor. So we didn’t get to see a reaction from Daryl, but in season five — give us a reunion between these two!

Some Romance With Daryl: Okay, so who doesn’t really want to see a real romance blossom between Carol and Daryl? Their bond was cemented early on after Carol’s daughter Sophia disappeared in the woods and Daryl tirelessly searched for her. Perhaps that was the first time we got to see a softer, more human side to Daryl. Prior to that, he seemed to be a clone of his brother Merle — a heartless, self-centered, thug. As Carol and Daryl seemed to grow closer to each other, we saw a greater depth to Daryl — and now, after being separated, let’s see more than just a happy reunion. Those two need to tell each other how they feel!

Redemption: As mentioned before, Carol made some hard decisions in season four: She killed two people who were sick with the deadly virus in the hopes of stopping it before it spread (she wasn’t quick enough — it spread and killed several). Later she had to “put down” Lizzie to stop her madness from taking more lives. While I think we all understood the reasons behind Carol’s action, it still makes it hard for most of us to see her as more than just a killer. We need to see Carol redeem herself — not just in our eyes, but to Rick and Tyrese.

A Restored Friendship with Rick: Carol and Rick had a solid friendship up until halfway through season four. After discovering what Carol had done to stop the spread of the virus, Rick took it upon himself to oust her from their community. What is ironic, though, is that Rick himself was later called upon to kill in the most brutal fashion, so he is as much as killer as Carol. We need to see the friendship between these two restored and the hatchet buried so these two warriors can fight side by side once again.

A New Purpose: During the early parts of the series, Carol spent her time caring for her daughter, then she cared for Laurie as her pregnancy progressed. Carol then took care of baby Judith, and finally, she was charged with caring for Lizza and Mika. Carol is back to caring for baby Judith again, but during her time at the prison, Carol took on an even larger leadership role. She taught the children to fight the zombies and she was a respected leader in the community. Now, in season five, she needs a new purpose. I can see her resuming her leadership role as the characters come back together, because hey — Carol really is a natural born leader.

Whatever happens to Carol in season five, let’s hope she doesn’t become a casualty. Carol is perhaps one of my favorite characters and I am rooting for her to make it despite everything that’s being thrown at her.