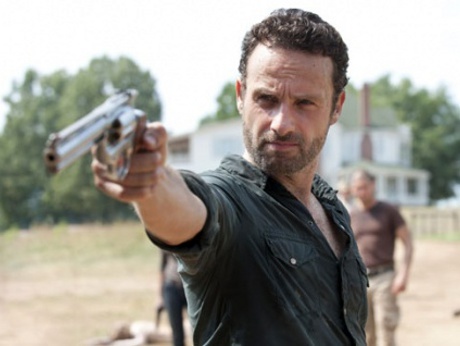 Since we woke up with Rick Grimes to find a brand new, terrifying world in the first season of The Walking Dead, we have rooted for him to finally have some good things happen to him. In this new world of death, destruction, and zombies, we are all still rooting for even small rays of sun to shine on Rick. Now that season five is upon us, here are five things we hope happen for Mr. Grimes.

A Reunion With Judith: Season four left Rick still separated from his infant daughter. As a matter of fact, Rick still doesn’t know that his little Judith is still alive. If you’re like me, I can’t wait to see that reunion between Rick, son Carl and baby Judith.

A Bit of Happiness: Rick has had so much sorrow throughout this zombie apocalypse, and hey — who hasn’t? But Rick is our intrepid hero and we’re rooting for him to find some happiness. We grieved with him as he watched his friends and loved ones die and we ached for him as the pain of losing his wife overtook him.

We want Rick to find even a small measure of happiness. What does that mean? In The Walking Dead world, who knows.

It could mean that he finds a new love or just that he has his family back together. And by family, I mean not just Rick’s flesh and blood, but his prison family who have bonded together as a ragtag zombie-fighting family. Happiness for Rick could even mean the chance to enjoy his farming ventures again.

In short, we just want to see Rick find something to enjoy and be happy about.

A Place of Rest: Throughout the seasons of The Walking Dead, one thing that Rick has really wanted to find was a place of safety and rest. He found it for awhile at Hershel’s farm, but that ended in a blaze of gory…or glory? The prison provided a place that we thought would be safe for awhile, and it was. That is until The Governor’s Woodbury Utopia collided with the prison population.

In season five, I want Rick to find a new place to call home.

A New Purpose: During seasons three and four, Rick sort of floated around without any real purpose. He doubted his leadership and even gave up on being a leader of our favorite group of survivors. Rick was reluctantly pulled back into a leadership position halfway through season four and as that season ended, we saw Rick filled with a new, hardened resolve to lead his people.

Rick will undoubtedly lead his people — at least a portion of them — out of harm’s way at Terminus, but it will certainly take its toll on him. Rick has been forced into brutality as he has dealt with the various threats against those in his care, and it’s certain that his developing savagery will serve him well at the beginning of season five. Let’s hope he finds a new purpose to drive him, and perhaps even help him regain his humanity.

A New Mentor: Who didn’t cry when Hershel was murdered by The Governor? I shed my own tears, and now, Rick is on his own without his mentor. Let’s hope that someone else — full of wisdom and strength — will be raised up to fill that role for Rick. Now, with all that has passed for Rick, he needs someone to provide guidance to him. Let’s hope that happens.

It will be interesting to see what happens to Rick Grimes during this new season. We can only watch and hope that we see a few good things finally happen for our worn and weary hero.