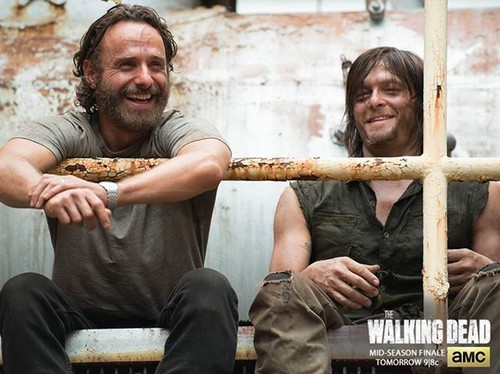 The Walking Dead continues on AMC tonight with all its gory goodness with an all new Sunday November 30, Season 5 episode 8 mid-Season Finale called “Coda” and below is your weekly recap. Tonight, Rick [Andrew Lincoln] seeks a peaceful agreement when rules and morals are tossed aside by new enemies.

On the last episode of The Walking Dead, some members held down the church while the others were on a rescue mission. Did you watch the last episode? If you missed it, we have a full and detailed recap right here for you.

On tonight’s episode as per the AMC synopsis, “rules and morals have been tossed aside by new enemies. Rick will try to find a peaceful agreement, but they might prefer violence.”

You aren’t going to want to miss any of the unfolding action tonight. We’ll be recapping the season 5 episode 8 Mid-Season Finale live right here for you at 9pm. In the meantime, hit up the comments and tell us what you’re expecting from Season 5.

The cop known as Bob ran off and is trying to cut off what they tied his hands with, he fails and is out running some walkers; though Rick got into the police car and is catching up; Rick tells Bob to stop but he doesn’t listen. Rick speeds up and hits him which knocks him right onto the ground. Bob starts pleading for help, he tells Rick he is crazy and probably broke his back; Bob says he couldn’t stop. Rick goes over to Bob and shoots him right in the head.

Gabriel is at a school looking around for things to take with him, he finds a book with the name Mary B in it; it’s a bible. Gabriel finds a leg cooked and rotten on a homemade grill; he throws it down and starts to cry. The walkers in the school break the door and are now coming after him, Gabriel starts limping away into the forest; he falls but gets right back up to keep going. He stops at a tree and they just keep coming, Gabriel gets back at the church but there are too many walkers to get back in, Gabriel is yelling to get back in. Carl hears him outside and is going to save him; Carl can’t open the door but Michonne comes over and axes the barricade down and Carl opens the door. Carl shoots a walker in the head and Michonne pulls out her katana and kills a few. Gabriel leads them to the hole in the floor, he holds the door shut with a chair and tells them to go; Gabriel runs letting it go and hurries behind them. Now Carl and Michonne go and lock all the walkers inside the church, Gabriel says he can’t run away from it anymore.

Rick walks back to the hideout and tells Daryl the man wouldn’t stop, Daryl says this changes things; Daryl tells him it’s okay because others said Dawn wasn’t a fan of him. Maybe did her a favor, the cops say he was a good man and was attacked by walkers; Rick says she is a good liar. Rick asks them if they want to live, the cops both agree that the will do what they can to stop them going guns blazing. Dawn is on a stationary bike calling in for the cops who are out, but none answer her. Beth then asks Dawn who the man in the picture with Dawn is, Beth mentions that people say he is in charge. Dawn tells Beth that he was her mentor and friend, she misses him. Beth asks what happened to him, Dawn says he risked his life going out.

Michonne, Carl and Gabriel are outside the church, Carl asks Gabriel where he went and he confessed the school. The walkers are slowly breaking down the barricade on the church door, Abraham drives in on the firetruck and blocks the door. Glenn tells Michonne that Eugene lied about stopping the walkers and asks where everyone is; Michonne tells Maggie that Beth is alive and they are going to save her. Maggie gets really happy and they decide to go save her sister. Beth sees an officer pushing around an elderly man, then goes after Beth but Dawn interrupts saying she needs her.

Beth is just sitting with her legs hanging over the elevator shaft, Dawn comes by and says that Percy is going to be okay; Beth says that nothing is okay. Dawn asks if she’ll jump, Beth says she wanted to be alone; Dawn says she knows Beth wont be going anywhere. Beth says neither is she, Beth says that this is not going to end; this place and who she is will never stop. Dawn says she saved Beth twice, the others don’t know what she did; Dawn says that she believes Beth is a cop killer. She protected Beth and they helped the patient, she didn’t want to but had to; she tells Beth there is a way to do things.

A cop comes in and Dawn asks what he’ll do, the guy tells Dawn they deserve to know who they are working for. Dawn says he can’t threaten her, he says it’s the fact and that she is cracking; he says it’s time for a change. Dawn pulls out her gun and says she is nothing like Hanson and even said she killed him since no one else could, the cop turns around and tells Dawn to lower her weapon. Dawn tells Beth to get out of the way, the cop says she can’t do this but Dawn says that she has to. The cop talks about knowing her for so long, though Dawn says he’s nothing like that man before; he beat an old man and laughing about a girl getting raped. Dawn says she won’t let it happen anymore, the cop says it’s about her holding on to what she has; knowing it isn’t her. After Hanson she changed, the man charges Dawn and she start fighting him. Dawn is being choked  and Beth goes to save her; though Dawn kicks him away and Beth shoves him down the elevator shaft. Dawn thanks Beth.

Beth is sitting in Carol’s room, though Dawn comes walking in and tells Beth it is okay to cry; Beth says she doesn’t cry anymore but Dawn says she does and makes sure no one sees it. Beth says she knows why Dawn covered for her, she protected herself; Beth believed the cops killed were problems and she didn’t have to do the dirty work. Beth says she is going to get out like Noah, Dawn says he’ll be back; none of the get far away. Beth tells her that he’s going home, Dawn says she was like Beth when she was younger; nobody could tell her anything and that she isn’t stupid. She knows that Beth knows Carol, though knows they can both be a part of this thing; it’s one of the most important things ever.

Dawn says that the cops that were killed hurt people, the world lost nothing from their deaths; Dawn says she never used Beth. Tyreese and Sasha are sitting on top of a building with rifles aiming down to where the “exchange” will take place. Tyreese tells Sasha about the man she killed, having met him far before, he remembers how she used to copy everything he did; he wonders what happened to them both. Now Daryl takes Tyreese’s place and Rick is waiting for someone to come. Rick walks over with his hands up to two cops, he tells the two that he is Rick Grimes and that he was a deputy. They tell him to lay his weapon on the ground, Rick takes out his pistol and puts it down. The cops walk over and Rick says they have two of his people and they have two of theirs; he wants to make an exchange. Rick confirms that Noah is with them, Sasha shoots a walker with a sniper and Rick tells the cops his people are close. Rick tells them he will radio them in 10; he’ll wait.

Rick and his gang are now inside the hospital with the officers they capture, Beth hides a pair of scissors in her cast. Rick and his group are being led up and are met by Beth, Carol and a bunch of officers. The officers put away their guns, Rick tells his group to lower their weapons too. Dawn asks about the missing man Bob, though first asks for one of theirs for her own. They pass one officer over and they get Carol, Dawn then brings Beth over as Rick brings over the other officer. Dawn says she is glad they worked things out, she looks at them and says she just needs Noah then they can leave. Rick walks over and says it isn’t part of the deal, Dawn says Beth took his place and now needs him back.

Daryl says he doesn’t want to be here, Noah says it is okay and Rick says it’s not okay at all and Beth agrees. Noah says he’ll go back, Beth walks over and gives him a big hug. Noah says it will all be okay, Beth looks Dawn in the face and says she gets it now. Beth stabs Dawn with the scissors and Dawn’s gun goes off shooting her in the head; Daryl pulls out his pistol and shoots Dawn in the head. They all raise their guns but one cop yells it’s over; the cops tell them they can stay. Rick tells them no, he also offers to take anyone with him who wants to leave. Abraham and the gang arrive in the firetruck, they go up to the hospital and start killing walkers out side. Rick and the gang come out to them, he shakes his head. Maggie sees her sister and starts crying, Daryl brings her out in his arms.

We now see Morgan and he is at the school, he sees the books on the ground and the broken glass; he finds a walker on the ground crushed. He takes out a knife and tells it to be quiet as he stabs its head; Morgan gets to the church next and leaves a bullet, a Good God package and a little rabbits foot there. He prays then gets up with a little laugh, he then sees a map on the floor saying come to Washington the new world’s gonna need Rick Grimes.