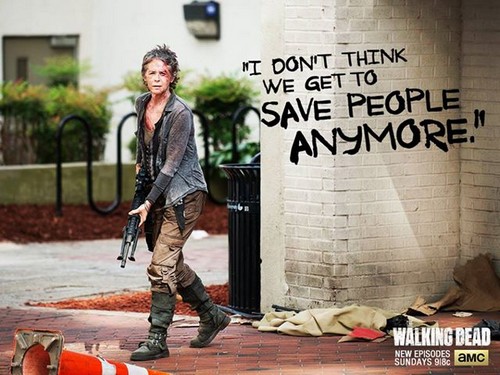 The Walking Dead continues on AMC tonight with all its gory goodness with an all new Sunday November 23, Season 5 episode 7 called “Crossed” and below is your weekly recap and synopsis spoilers. Tonight, a rescue mission while attempting to hold down the church leaves the group spread thin.

On the last episode of The Walking Dead, stakes were high when members of the group had to go on a heroic rescue mission in a previously known location.  It was a huge stage, but so were the stakes. This episode placed the spotlight on Carol and Daryl’s whereabouts, after they took off chasing the car with the cross sign in “Strangers.” Their mission” should have lead them to Atlanta, the home of Grady Memorial Hospital, the place Beth was being held against her will. Did you watch the last episode? If you missed it, we have a full and detailed recap right here for you.

On tonight’s episode as per the AMC synopsis, some members hold down the church while the others are on a rescue mission.

You aren’t going to want to miss any of the unfolding action tonight. We’ll be recapping the season 5 episode 7 live right here for you at 9pm. In the meantime, hit up the comments and tell us what you’re expecting from Season 5.

We now see Sasha hitting an axe against a bench in the church, Tyreese tells Daryl he’s lucky he wasn’t herre for the whole Bob incident. Outside Gabriel asks them if they’ll take the cross too as they barricade the church, Daryl tells them they’ll take what they need. Rick talks to Michonne about going to Atlanta and that he can’t go; Michonne tells him she can do it since she owes her. Rick goes ahead giving Carl a huge and decides he’s going to go, leaving Michonne and Carl behind at the church with Judith and Gabriel. Gabriel goes walking around inside of his church and sees a blood stain on the floor, he tries to scratch it out but it doesn’t work at all. So he spits on his hand and tries to rub it out.

Tyreese tells Sasha he’s been where she is now, Sasha tells Tyreese she is sorry and doesn’t want him talking about Bob.

Beth is cleaning the floors and goes to check up on Carol, Steven tells her he’s giving going to check her health. Now we see Glenn and the group, Glenn asks if they should go back to the church for Eugene since he still hasn’t waken up.. Rosita goes up to Abraham and offers him water, he just sits there and smacks it out of her hand, she tells him to look at her and he gets up. Maggie points a gun at him and says to sit down or she will put him down. Abraham goes right back down on his knees.

Back to Rick and the group are making a plan to keep quiet when attacking the hospital. Tyreese questions their plan, Rick tells him it will work but Daryl says Tyreese has a good idea on just taking out two of the cops with Dawn; she’ll have no choice but to give up.

Gabriel is now scrubbing the floors, Carl tells him to pick a weapon so he can defend himself because he needs to know how to fight in this world now as it is, Gabriel goes ahead and picks up a machete; Gabriel says sorry and wants to go lay down. Dawn is complaining about trying to find Noah, the officer she’s talking to mentions they can’t let Carol live to waste resources. Beth tells him he charges his DVD every day and it’s not fair, Dawn is annoyed with her speaking up and says to turn off the machines and let her try to make it out herself. Dawn tells Beth she can’t do anything, though tells Beth to save her because Dawn now sees she isn’t a week little girl.

Back to Glenn and his group, Rosita, Tera and Glenn go to search for water at a creek close by. They walk across some walkers, Tera tells them that they can’t let what happened bother them; they can just move on. Maggie takes down the ladder from the fire truck and lays it at the front of the truck; putting a blanket on top to cover the sun for Eugene. Maggie goes over and tells Abraham that he has to get over himself and that he’s not the only one who lost something.

Doctor Steven gets a knock on his door and it is Beth, she asks to come in and he allows her to. Beth asks him what medicine she should use to help her, Steven tells her exactly what she needs; Beth leaves and Steven tells her good luck.

Glenn tries gathering water and it’s very dirty, Rosita cuts off a piece of her shirt and takes the water; she decides to build a home made water filter. Tera asks Rosita if she was with Abraham since the beginning, she says they crossed paths in Dallas and he asked her for help personally. Glenn sees something ripple in the water. Now we see some police officers in a police car chasing down Noah, they tell him to put his gun down, he drops it and puts his hands up.  They go ahead and cuff him, they tells him they thought he was smart. Rick and the group come out, they tell the cops to put their weapons on the ground and kneel. The cop asks Rick if he’s a cop, Noah tells him it’s okay he is one of the good ones.

A car comes driving by and a cop starts shooting at them; he picks up the two cuffed cops and drives off. Rick and the gang are now walking through a courtyard and see the two cops running, Daryl goes over to a car and then a mobile home looking for people on his own, he opens the mobile home door and sees it is clear. One of the cops run over and shove him to the ground, the two get into a fight right around the walkers on the ground, Daryl is on the floor being choked as a walker is trying to bit him. Daryl hooks a walker in the eyes and pulls his head off hitting the cop in the head with it. Rick comes over to the cop and the cop gives up; Rick was set on killing him till Daryl tells him three cops are better than two captured.

The group bring the cops together, the cops say they are nothing important and she wouldn’t care to trade them; she says they will take care of Dawn themselves. Another on of the cops tells them they can make it work, though they will have to talk to her; he wants to make a peaceful resolution and pleads to let him help them.

Glenn and the group kill a couple of walkers, they kill them and take their cloths to make home made nets to catch fish to eat. Tera tells them she found something they’d never believe. We now see Michonne go and check up on Gabriel, he says he is just resting; she says she knows this is all new to him but wanted to tell him that the things they do are worth it. Gabriel told her he took the machete already and what more they want from him, Michonne says she just wants to help; Gabriel closes the door again and picks up the machete; he’s pulling up the floor boards in the room.

At the hospital Beth trades somebody some strawberries to start pretending to be sick, she then goes ahead to steal some of the medicine to help Carol.  She walks by the man and he stops his act. Beth then goes into Carol’s room and goes to give her the medicine she needs.

Tyreese is unpacking a car and tells Sasha she has to listen to him, he says she got to say goodbye to Bob and he felt it; though he never go to say anything to Karen. Sasha says she should have been able to do everything herself, Tyreese tells her she let him help her and it’s okay to ask for it sometimes; they both hug it out. Gabriel is looking under the floor boards and crawls out of the church, he then has a nail in his foot; he pulls it out. He then starts limping away. Rick is talking to the cop about heading out soon, the cop asks for water and Rick says he’ll bring it. The cop says his name is Bob. Gabriel is out in the woods and hears something, a walker comes out and attacks him; Gabriel pushes it away and slams it on the ground. He goes to smash her head but sees a cross around her neck so he throws the rock away instead and walks on. Sasha goes up to Bob the cop and he says he’ll be okay; he mentions seeing one of the riders in the car. Sasha sits down and listen to Bob talk about his friend Tyler, he was supposed to drive survivors on the truck; though Dawn made Tyler do it since Bob wasn’t trusted as much. Sasha tells him she’ll help him, she mentions being a good shot and wants him to show her.

Maggie goes over to over Abraham some water, but he just sits there not saying anything; Maggie asks if he wants her to shoot him. Abraham says he thought he did, but he didn’t. They hear a sound and it is Eugene waking up, Maggie goes over to him and Abraham takes some water.Sasha looks outside for Bob with her gun, the cop smashes her head against the window and knocks her out.