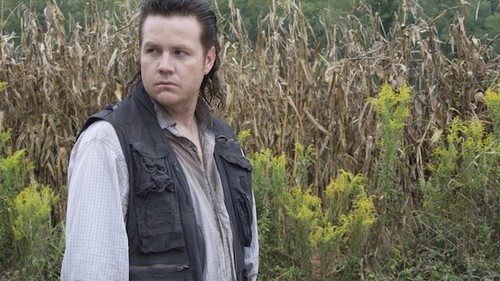 The Walking Dead spoilers for season 5 have been remarkably accurate so far. In this installment of TWD spoilers we explore the fate of one the series’ great liars, Eugene. According The Walking Dead spoilers for the mid-season finale, episode 7 “crossed,” tell us that we will learn whether Eugene survives the beating he received at Abraham’s angry hands. In a previous episode (episode 5, ‘Self Help’) of The Walking Dead we learned that mullet man Eugene was a con artist. Who didn’t see that one coming? Eugene admitted that he wasn’t a doctor and didn’t know a cure for the zombie virus, that he had made up the story in an attempt to survive and enlist others to help him survive.

Unfortunately for Eugene, the one he enlisted was Abraham. Ah, Abraham. That guy has some anger issues. He really needs counseling. His temper and penchant for violence is so bad that he scared away his own wife and kids, causing them to choose their fate against the zombies instead of dealing with him. That’s gotta be bad for his self-esteem.

Abraham made keeping Eugene safe and getting him to Washington D.C. his mission and well, it backfired for Eugene.

When last we saw the mulleted wonder, he had been beaten horribly by Abraham. After admitting his ruse, Abraham went crazy and delivered a serious smackdown leaving that particular group of survivors in a bit of a limbo. The episode ended with Maggie, Glenn, Rosita, and Tara attending to the unresponsive Eugene and Abraham crumpling to his knees several feet away.

The episode ended without us knowing what happened to Eugene. Does he survive? Here are a couple of possible scenarios for our retro-haired anti-hero:

Okay, this seems to be most plausible. That beating was bad. No, really baaaaad. It is unlikely he survives for long. Most likely, we will see Eugene dispatched after becoming a walker in an upcoming episode.

Head injuries are serious business and they radically change people. If Eugene doesn’t die and become a walking scammer, then the next likely scenario is that he will be a vegetable. He will be alive, but unable to function. That brings about a whole new moral dilemma that we’ve not yet dealt with on “The Walking Dead:” What to do with someone who is alive, but is unable to care for themselves?

Eugene Recovers and is Ostracized

What happens to Eugene is he recovers from his injuries? Obviously no one can trust him now. There is certain to be plenty of anger directed at him because of the amount of lives he cost due to his ruse. If Eugene recovers, he is probably better off to take his chances with the walkers, because with Abraham still around, he is unlikely to live a life of ease as he did before. Once Rick and the others find out about his lies, it is also unlikely that he will be allowed to stay with the group.

It will be interesting to see how our survivors handle Eugene. Once The Walking Dead season 5 episodes resolve the Carol/Daryl/Beth situation, it is certain that Eugene will be dealt with somehow. Tune in often to CDL for more excellent The Walking Dead spoilers!