The Walking Dead Season 5 Spoilers: How to Survive The Zombie Apocalypse – The Most Important Tool? 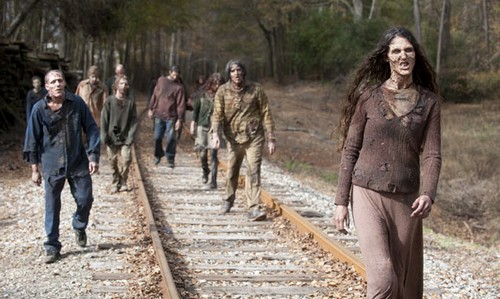 The Walking Dead season 5 spoilers have revealed who dies, who lives and much more but now we cover surviving the zombie apocalypse and which tools are best! Over the course of four and a half seasons of The Walking Dead  we’ve seen plenty of “tools” used for surviving the zombie apocalypse. All sorts of interesting and unique things have been used to killer the undead — and even the living — but tools for survival are not just meant for killing. So what’s the most important tool necessary for survival? Let’s see.

Guns are certainly handy in the zombie apocalypse and they making dispatching walkers simple enough. The things about guns, though, is that they require ammunition. And ammunition is not universal. A deer slug for a shotgun won’t work with Rick’s Python pistol. Ammunition isn’t something that is easily scavenged, and if you don’t have a weapon that is compatible, the ammo is useless unless you want to throw it at the walkers and hope it distracts them. Nope, guns are handy, but not the most important.

Okay, who doesn’t love Daryl’s crossbow? We’ve seen him kill zombies by shooting arrows but also by swinging his crossbow. It’s pretty darn handy and super cool to boot. What if he runs out of arrows, though? It’s not like he can make a run down to the local sporting goods store to pick up a new package. He could make some homemade arrows, but unless he gets them perfectly straight, they won’t be as effective. Nope, crossbows are cool, but not the most important either.

Right after Daryl’s crossbow, Michonne’s katana sword is the coolest. Rick’s red-handled machete follows right along and blades of all kinds have become an important staple in The Walking Dead universe. Blades can incapacitate zombies, cut ropes, skin wild game, and have plenty of other uses. Blades of all kinds are pretty important for surviving the zombie apocalypse, and wouldn’t you rather have a good knife over all the guns and crossbows? Well, maybe. Regardless, blades are important, but not the most important.

We can’t really survive without other supplies — namely food, right? After all, we don’t want to resort to eating other people. We saw how well that worked out. Without food and water, there is no survival, but it’s not the most important “tool.”

The Most Important Tool

So what is the most important tool necessary for survival during the zombie apocalypse on The Walking Dead? It’s not really a tool at all — it’s a quality. And that is a sound mind. We have seen time and time again when TWD characters have survived with no weapons, only their wits. A sound mind gives you guidance and directions as well as helps you determine the difference between right and wrong. Yes, the lines between right and wrong are certainly blurred during this zombie crisis, but a sound mind still helps you figure out the edges and boundaries.

In short, keep your mind sharp and focused, and you will have a better chance at survival than if you had all the weapons in the world. You can kill zombies and have a mind full of mush — and that’s no way to survive. Come back tomorrow to CDL for more The Walking Dead season 5 spoilers.