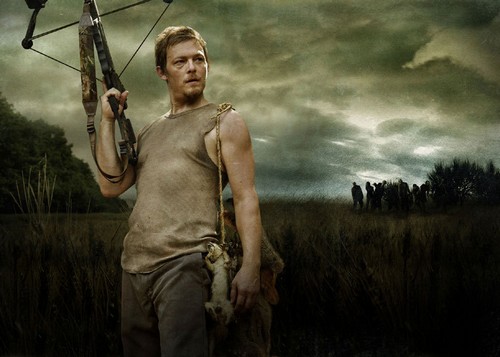 The Walking Dead Season 5 Spoilers are full of mystery and savage violence and our friend Daryl plays a big role in all of it. In episode 4 “Slabtown” we hope to answer a few questions involving our crossbow wielding hero. At the end of The Walking Dead season 5 episode 3, “Four Walls and a Roof,” Daryl comes back, but he’s not alone. At the end of the episode, Michonne sits on the steps of the church. She hears something in the woods nearby and goes to investigate — katana in hand. She sees Daryl emerge from the woods and is obviously glad to see him, but her smile fades as she realizes Daryl seems to be alone.

“Where’s Carol?” she asks. Instead of answering, Daryl turns to the trees behind him and says “Come on out…” and the episode ends. So who is with Daryl?

We assume it isn’t Carol, because, well, that would be too easy. At this point, we only know that Carol and Daryl sped away after another vehicle — the same vehicle Daryl believes nabbed Beth. Other than that, we know nothing. Is it Beth?

There is speculation going around the web that the mysterious person with Daryl is, in fact, Beth. Trailers for next week’s episode, “Slabtown,” could lend credibility to that idea since we already see that Beth will be in that episode.

If the mystery person is Beth, she has just missed Maggie, and they will not be reunited for awhile — if ever. If Beth is the person with Daryl, that still leaves the question: Where’s Carol?

Perhaps Beth has escaped her captor. Scenes from next week allude to Beth being in a hospital. Hospitals are supposed to help people, right? So she should be safe, right? Hmmm, well Terminus promised sanctuary and we all know what happened there. Is it Morgan?

We already know that Morgan is following our group of survivors. We don’t know how far behind them he is or where he is now. Raise your hand if you assumed he was dead! After Rick’s last encounter with his friend and mentor, I think it was safe for all of us to assume we had seen the last of him. Our glimpses of Morgan so far in season five, though, give the impression that he has come to his senses and may not be as loony as he was the last time we saw him.

There is speculation that our mystery person is Morgan. If so, then his presence offers a lot to the group.

Is it “Someone Else?”

Rumors flying around the Internet (and of course, you can always trust those) hold that the mystery person is in fact a new character. There is speculation that Noah Cruz — a character introduced in the video game, The Walking Dead: Survival Instinct — is the mystery person with Daryl.

In the game, Daryl meets Noah while he is out on a supply run. The game scenarios hold that keeping Noah alive results in rewards for Daryl at the end of the game. There is a hospital involved in the game, so perhaps there is some validity to the Noah theory.

Who is with Daryl? Let’s find out this coming Sunday on TWD!