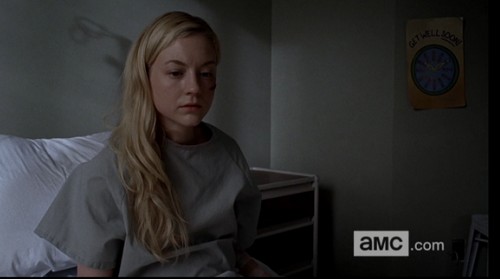 The Walking Dead spoilers for season 5 episode 4 “Slabtown” continue the breakneck pace, with next week’s episode looking to focus solely on Beth Greene [Emily Kinney]. As fans know, Beth has been missing since the end of Season 4, when she was abducted in a mysterious car and taken off to who-knows-where. Except, we finally know where she was taken – and it ain’t looking pretty.

There will be plenty of spoilers (like who dies next!) for The Walking Dead season 5 Episode 4 here, so for anybody who’s spoiler-phobic, look away now. We don’t know about any major plot points, but we’re getting a pretty good inkling of where the first half of this show is headed. According to several insiders, next episode will focus almost exclusively on Beth’s character, showing her in what looks to be downtown Atlanta. From the two sneak peaks that have released, it looks like she’s trapped in some sort of hospital, along with several other unwilling guests. The people heading her group include a police officer and a doctor-type, but as we’ve learned to expect from this show, nothing is as it seems. She’s clearly trying to escape her captors, so I’m guessing they’re not ‘good’ people – good being subjective, of course.

Now, we’re hearing that Episode 4 “Slabtown” will focus on Beth’s point of view, and then Episode 5 will likely dovetail back into our group – maybe focus on Glenn, Maggie, Abraham, Rosita, and Eugene. We’re guessing this because Episode 6 is supposed to be a Carol and Daryl centric episode, and it will probably detail their attempted rescue of Beth before Carol and Daryl get separated. And the person that Daryl returns with at the end of Episode 3? Well, that’s probably a new character, either Noah or Aaron. These two characters were confirmed as joining the show during this season, and all we know is that Noah is a survivor from Beth’s hospital group, and Aaron is an Alexandria safe zone recruiter [where the group eventually ends up].

Now, we’re also hearing some MAJOR spoilers for the upcoming season, and that’s apparently that Beth will meet her end before the mid-season finale. Apparently, Emily Kinney hasn’t been spotted on set for the past few months, and whenever that’s happened in the past, it’s meant adios for the character. Now, it’s very possible that Beth is once again kept by the wayside and/or kidnapped and taken somewhere, but I doubt the writers would want to go that same route twice.

What do you guys think? Who’s the character that’s with Daryl at the end of Episode 3? And do you think Beth will die? Let us know your thoughts in the comments below. Tune in to CDL for more The Walking Dead spoilers tomorrow… who dies next! Don’t read our spoilers if you don’t want to know!