The Walking Dead Season 5 Spoilers: Did TWD Kill Off Gareth Too Soon? 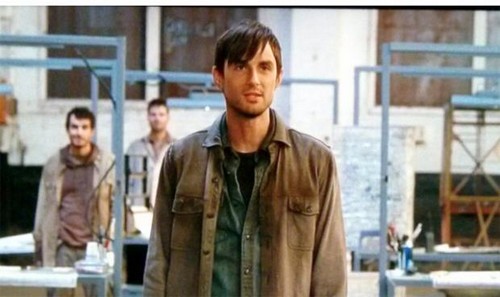 The Walking Dead spoilers for season 5 have predicted accurately much of what has transpired on the show and yet the first episodes have shocked and delighted TWD fans. The Walking Dead is a show that has been built on suspense and story. One thing I will say about TWD during season five is that they have been efficient and to the point. There has been no dilly dallying about storyline. In only three episodes, The Walking Dead has destroyed Terminus, had the leaders chase down the group and eat Bob, and then be absolutely massacred by Rick and the group inside of the church. Gareth, the charismatic and insane leader of the Terminus group is gone nearly as fast as he was introduced.

In some ways this feels like a waste. Gareth was a pretty cool character despite his disgusting behavior. He made you pay attention.

The question is…Did The Walking Dead writers kill off Gareth too soon?

My answer is yes.

Way back on The Walking Dead season 4 when the group was being chased and hunted by the Governor, I felt as though that story dragged forever. In fact, many people were ready for the story to move on during those days. The Governor needed to die and really should have been taken out long before he was in my eyes. That said, Gareth was killed off way too quickly. It seemed far too easy and like a waste of the story arc. For a show that is built on suspense, there was absolutely no payoff to watching him die.

Yes, Gareth ate Bob right in front of Bob. Yes, Gareth was prepared to massacre the entire group for a shish-ke-bob dinner. Still, we did not have enough time to absolutely despise Gareth as we did the Governor. When the Governor was killed, you could actually enjoy his demise. (in a watching television kind of way)

With Gareth, he had barely had time to tell his story. It made one wonder if Terminus was only used to transition to a new season rather than be a large part of the story. The prison was a season long affair at least.

Although I am in agreement that the Governor story went too long, Terminus was actually too short. At least, Gareth being killed was too quick. He could have been lurking in the shadows and out of the picture for a bit and make a return when you needed something huge. There is nothing quite like a human cannibal hunting your group for suspense.

Zombies are supposed to try to eat us. Gareth was a whole other story. If you were to take the amount of time they dedicated to the Gov and the short time it took to tell Gareth’s story and split it down the middle, then they would have had it about right.

One thing I do love about it is that it keeps the story moving along crisply. Already they have split the group up and created several new story arcs. Maybe they know what they are doing after all. Tune in tomorrow to CDL for another amazing The Walking Dead season 5 spoilers post!